Blanketing your home in sweet Wi-Fi and sweet music, Nest Wifi could be the answer to your wireless woes. Yet there's still an Achilles' heel.

If your home is plagued with wireless black spots then mesh Wi-Fi is a winner; spreading several Wi-Fi hubs around the house to work in unison and appear as a single network. 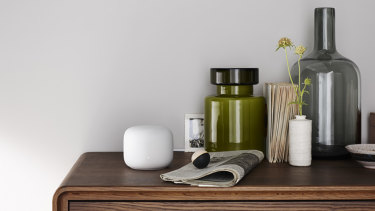 The Nest Wi-Fi router looks nice enough that you can keep it out in the open, which is also good for your network coverage.

Your devices roam seamlessly between the hubs, ensuring you still get a strong signal in the furthest reaches of your home.

Of course not everyone wants big, ugly Wi-Fi base stations spread around their home, but thankfully Google's tiny hubs look more elegant than most.

Compared to the original Google Wifi, which was comprised of identical puck-shaped devices, the biggest change is that Nest Wifi has distinct designs for the main wireless router and the satellite points. The satellites double as smart speakers, letting you talk to the Google Assistant and play music with similar sound quality to the new Nest Mini.

Google has even thrown in a few voice-friendly features, such as the power to ask Google Assistant to pause internet access for a specific group of devices; a great way to ensure you have everyone's complete attention.

The Nest Wifi comes in a $399 two-pack with a wireless router and one satellite, or $549 with two satellites, beyond which extra satellites sell for $229 each. 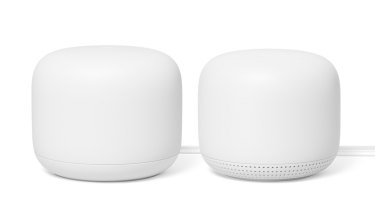 The Nest Wi-Fi router, left, is a little bigger than the add-on points which double as smart speakers.

The frustrating trade-off for smart assistant features is the loss of Ethernet ports on the satellites. This is a major hassle if you need Ethernet to connect devices at the other end of the house but, if you're stuck, you can still connect an old Google Wifi hub to your new Nest Wi-Fi network.

Aside from Google Assistant, the Nest Wifi's other big selling point is a stronger signal and faster speeds. To be fair, the old Google Wifi was already more than fast enough to handle 100Mbps broadband speeds. You'd only appreciate the speed boost when transferring hefty files around your home.

More important than raw speed, the upgrade means you can place your hubs further apart. The improvement is clear, with the Nest Wifi hubs maintaining a strong wireless link when sitting in distant corners of my home where the old Google Wifi hubs struggled. 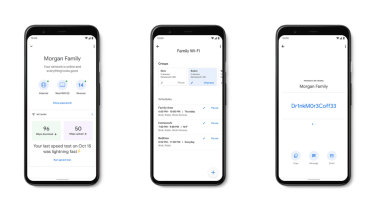 Google’s app lets you take control of your network, though you can also issue some commands with your voice.

Google has also thrown in the Thread and Bluetooth Low Energy wireless IoT standards for talking directly to smart home gear, but has thumbed its nose at the popular Zigbee and Z-wave standards.

If you care about the fine details, it's worth noting the Nest Wifi still relies on 802.11ac (Wi-Fi 5), even as the first 802.11ax (Wi-Fi 6) gear hits the shelves. Google's are dual-band 2.4/5GHz devices but, unlike more expensive mesh rivals, there isn't a third invisible network to help reduce wireless traffic jams.

Google has only upgraded the theoretical top speed on the router, not the satellites, so theoretically your top speed drops when you roam away from the main base. But this is all rather academic in your typical home and you'd struggle to notice the difference unless you really push your Wi-Fi network to the limit.

What's more of a worry is that Nest Wifi still lacks a "bridge" mode. If you want to use its mesh features it insists on sitting at the heart of your home network, usurping the router supplied by your internet provider.

One solution is to buy an Ethernet switch so you can plug all your devices into the Nest Wi-Fi router’s single Ethernet port, along with your existing router tasked with the single job of running your home phone.

Some telcos like Aussie Broadband can come to your rescue by letting you ditch their router and run your home phone from another device, like a little Sipura/Cisco VoIP box. You're out of luck if you're with one of the big players like Telstra and Optus; you either lose Google's mesh features, split your wired and wireless networks, buy an Ethernet switch or lose your home phone.

This might sound like a minor issue, and not everyone wants a home phone line, but it will be a big deal in some households. It's not the kind of gotcha you want to discover after handing over your cash, or recommending Nest Wifi to family and friends who still rely on a home phone.

So what's the verdict?

Nest Wifi has the potential to be your wireless saviour but, if for whatever reason you're wedded to your current broadband router, make sure you consider the implications of the lack of bridge mode before taking the plunge.