Google has unveiled its first ever smartwatch at an event in New York overnight, borrowing a few features from Apple and leaning on health tracking by Fitbit which it acquired last year.

The Pixel Watch is a circular, domed, 41 mm device in gold, black or silver, which works with Android phones and starts at $549; $80 less than Apple’s dominant wearable. 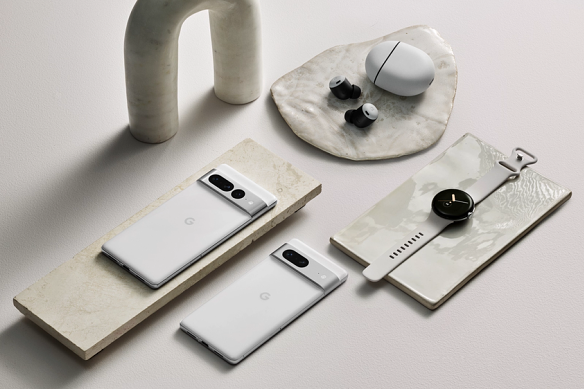 Google now has its own lineup of phones, watches and earbuds.

The watch comes with 19 customisable watch faces, an app store and several Google features built in. Maps gives step by step directions and a live view of your location, Wallet allows contactless payments or public transport fares, and there are also wrist-optimised versions of Google Home for controlling smart devices and Assistant for interacting with Google using your voice.

Health features come via the built-in Fitbit app, and include heart monitoring, an ECG, sleep tracking, fall detection and 40 exercise tracking modes. The watch comes with 6 months of Fitbit Premium, usually $15 per month, which offers insights, workouts and mindfulness sessions.

The Pixel Watch is controlled via touch and a rotating Apple-like digital crown, and also comes in an LTE version that can receive your calls and texts when you leave your phone at home, for $649.

At the event Google also detailed its latest smartphones, the Pixel 7 and Pixel 7 Pro. Though the designs are more or less unchanged since last year, the devices are powered by a new second-generation Tensor processor built by Google, and have a few new tricks.

Google’s language processing AI has improved so that voice messages you receive are now instantly transcribed into text in the Messages app, while the phones’ Recorder app can now distinguish between voices and attach labels.

The company also claims its AI can now eliminate background noise in phone calls, help the device reach a 72-hour battery life in low-power mode, and has improved the performance of low-light photography. The company also showed of a handful of new accessibility features powered by AI, including audio feedback to help blind users line up and take the perfect selfie.

The 6.7-inch Pixel 7 Pro has three rear cameras, including a 50-megapixel wide-angle lens with the ability to take macro shots and a 48-megapixel telephoto lens with 5X optical zoom. Google claims the 7 Pro can take clear shots a 30X digital zoom thanks to its AI algorithms. The 6.3-inch standard phone benefits from the same macro camera but misses out on the zoom; it also has a slower 90Hz screen rather than the 120Hz display of the Pro.

Both phones see the return of face unlock, matching most of the high-end handsets on the market, after that biometric authentication option was removed from the Pixel line with the fifth-generation model in 2020. Google also matches a feature introduced with much fanfare on the iPhone 13 last year: a Cinematic Blur mode that can synthesise depth of field and background blur in videos.

Finally, Google promised a built-in VPN would be added to the Pixel 7 phones at some point in the future, which would obscure internet traffic and make it more difficult to track or monitor.

The standard Pixel 7 starts at $999, with the Pro starting at $1299, and all Google’s new devices are expected to hit stores next week on October 13.