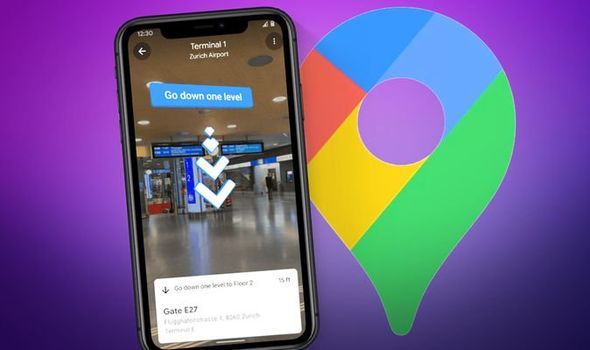 Google has previewed a handful of new features coming to Google Maps later this year. In total, the Californian company has more than 100 features up its sleeve for the software – all powered by advances in Artificial Intelligence, or AI. One of the biggest changes coming around the bend – bringing Google Maps indoors. While Google Maps is an essential tool when it comes to driving through a new area, navigating a foreign city, or checking the opening times of your nearest supermarket. However, Google has announced a truckload of new features for the turn-by-turn navigation tool to make it even more useful. Leveraging AI, Google plans to make navigating indoors a core part of the Android, iOS and web app moving forwards too.

This year, we’re on track to bring over 100 AI-powered improvements to Google Maps so you can get the most accurate, up-to-date information about the world

Google confirmed the changes in a detailed blog post. Dubbed Indoor Live View, the new functionality will overlay directions on the feed from your camera.

Live View is already available outdoors, letting Google Map users hold up their smartphone and follow floating arrows that point towards the right street – rather than using a traditional flat view of a map on your smartphone screen.

As the name suggests, Indoor Live View brings the same functionality inside. According to Google, this feature will let you “find the nearest elevator and escalators, your gate, platform, baggage claim, check-in counters, ticket office, restrooms, ATMs and more.” It sounds like Google has ambitions to replace traditional sign-posts inside malls, department stores, airports, and stations.

While this is likely to prove hugely popular everywhere, it’s likely to become even more crucial when travelling. If you don’t speak the language, being able to quickly find the toilets inside the airport without reaching for the guidebook, or Google Translate, could be a real bladder-saver if you’re in a rush. 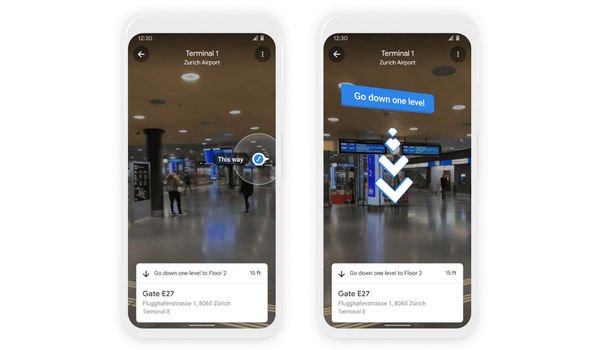 As always, it takes some time for these new features to roll-out. For now, Indoor Live View is currently only available in “a number of malls in Chicago, Long Island, Los Angeles, Newark, San Francisco, San Jose, and Seattle,” with locations in Tokyo and Zurich coming in the next few months. The functionality will work on both Android and iPhone. Google plans to support more cities in time.

Another key feature highlighted in the latest blog post will see weather data overlaid on your current map view. Available only in India, Australia and the United States right now, the feature can provide current and forecast weather conditions. So, you’ll be able to see whether the looming rain clouds will pass-by your walking route or whether you’re likely to find yourself in the eye of the storm if you continue walking down your current path.

Google is also adding air quality information too, so you can see real-time data on the amount of pollution in the air.

Speaking of air quality, Google has confirmed that will be updating Google Maps with the latest low emission zones in cities across the globe, with locations in the UK, Spain, France, Netherlands, and Germany first to launch and more to follow. 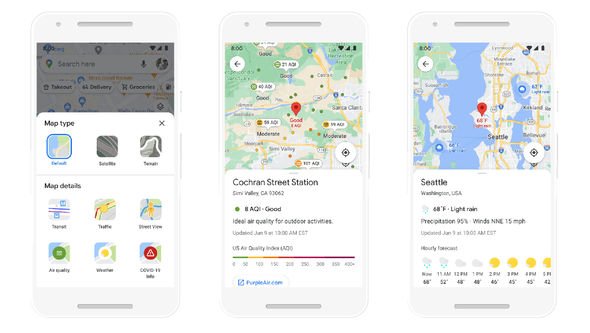 For its part, Google will prioritise routes based on the lowest fuel consumption to try to push drivers to lower their carbon emissions. To do this, Google’s clever AI will look into high-density traffic and road incline to determine which route will require the most fuel. The eco-friendly option will always be the default when the ETA (Estimated Time of Arrival) is roughly the same. Google will let you know if the most eco-friendly option might take you a little longer to reach your destination.

This option will land sometime “later this year” in the United States, with a roll-out to more countries planned in the future. 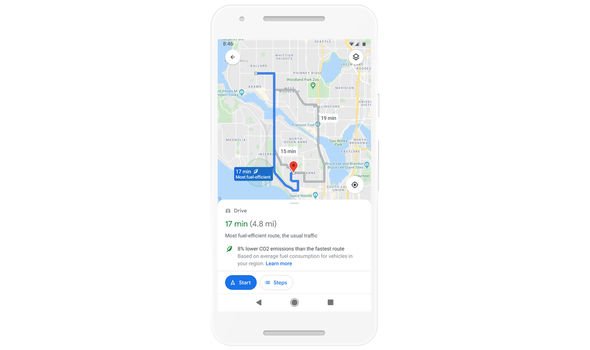 Summarising the AI-driven improvements planned for Google Maps, Dane Glasgow, Vice President of Product for Google Maps writes: “Sixteen years ago, many of us held a printout of directions in one hand and the steering wheel in the other to get around— without information about the traffic along your route or details about when your favourite restaurant was open.

“Since then, we’ve been pushing the boundaries of what a map can do, propelled by the latest machine learning. This year, we’re on track to bring over 100 AI-powered improvements to Google Maps so you can get the most accurate, up-to-date information about the world, exactly when you need it.”