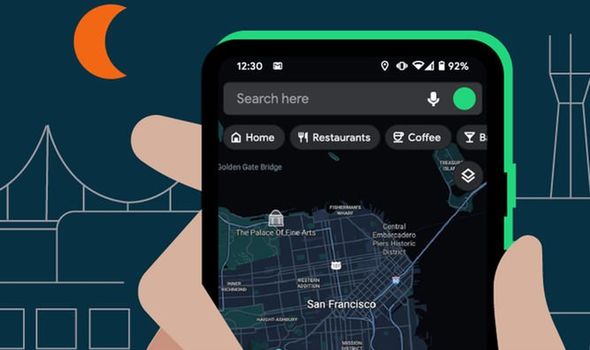 It’s been a long time coming but Google is finally bringing the popular Dark Mode to its Maps app. This update was first tested late last year but the tech giant has now confirmed that fans can give it a go… well, not all users.

Sadly, this upgrade is only available on Android phones at the moment with no word on when it will be rolled out to Apple devices.

For those on Android you’ll to treated to a much darker look when launching Google Maps which not only makes it easier on the eyes but can also save battery life, especially if your device has an OLED screen.

This is due to the way that OLED panels works, which doesn’t require any power to display jet-black shades of black.

That means owners of devices such as the Galaxy S21, Xiaomi Mi 11, Google’s Pixel 5 or the Galaxy Note 20 should see a significant battery boost when spending hours in the Maps app.

Explaining more about the changes Google said: “These days, we’re all experiencing a bit of screen fatigue. With dark theme in Google Maps soon expanding to all Android users globally, you can give your eyes a much-needed break and save on battery life.

“Simply head to your Settings, tap on Theme and then on “Always in Dark Theme” to lower the lights when you’re navigating, exploring, or getting things done with Maps. Change your mind? Just tap on “Always in Light Theme” to switch it back.”

Dark Modes have become increasingly popular in recent years with all of the major apps and operating systems offering this black appearance.

The Dark Mode update comes as Google recently announced another Maps update that will allow users to pay for parking, and get a ticket for the bus into town – all without using another app on your smartphone.

This update will be rolling out in the US first but hopefully, a global launch will follow in the coming months.

Discussing the inbound feature, Google said: “Now you’ll be able to plan your trip, buy your fare, and start riding without needing to toggle between multiple apps. You can understand how to pay in advance and even get your fare ready to go before you arrive at the station – which is helpful when you’re not sure what payment options a transit agency supports.”