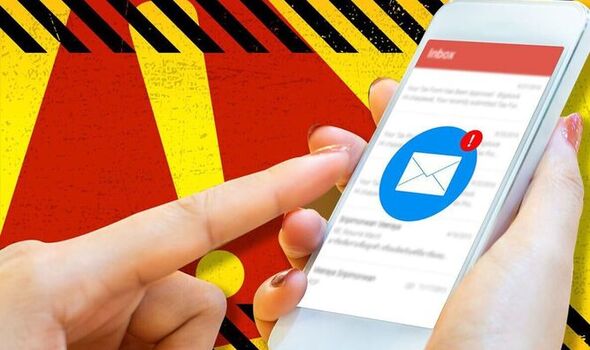 Gmail users should be on high alert when receiving any new messages in their inboxes after an explosion of scam emails. Google has just issued a stark warning about the sheer volume of fake emails that are being pushed out every day and, with the Black Friday sales and the holiday season in the US still in full swing, now is a particularly important time to take extra care.

Google says it has managed to block nearly 15 billion unwanted messages from arriving in Gmail inboxes in just one day. And that’s not all as over the past two weeks some 231 billion spam and phishing messages have been stopped in their tracks – that’s a whopping 10 percent more than Google usual spots.

Speaking about the shocking stats, Google said: “These con artists are pesky and persistent during the best of times, but during the holiday season their behaviour is even more extreme. That’s why we have a dedicated team of Googlers who work around the clock to thwart these uninvited guests.”

Although Gmail users have clearly been guarded against receiving billions of spam messages some do slip through the net so it’s still vital everyone remains vigilant. To help its users spot dangerous messages, Google has now released some top tips to help people stay safe and this is advice that should definitely not be ignored.

Google shares the evolution of their Gmail app

Here is Google’s top advice for spotting spam and keeping you PC and personal details safe from hackers:

Gift cards and giveaways
When the shopping season is in full swing, gift card and giveaway scams are too. Scammers may attempt to trick people into purchasing a gift card for them — sometimes using the guise of a known contact — or dangle a free prize in exchange for sharing their credit card information.

Charities
Attackers don’t show any restraint during the season of giving. In fact, charity-related scams and phishing attempts get worse this time of year, hurting both those who fall prey to the scams and the charities that would have benefited from the giving. be on the lookout for anyone asking you to contact them on their personal email or send money to them directly.

Demographic targeting.
Some of the most pernicious scams are the most specifically targeted to you. These scams might seem more personal because they include some specific element of your life or identity.

Subscription renewals
As we approach the end of the year, subscription renewal scams can spike. A particularly unwelcome version of these emails spoof antivirus services, which lure victims with the promise of improved security. While some scammers can make their message look very convincing, always be sure to check the sender’s email. If it looks off, it may be fraudulent.

Crypto scams
A whole class of scams to itself, crypto-based scams can run rampant this time of year. A common variation of these scams uses a cryptocurrency wallet to collect payment and often attempts to extort funds from a victim through a threat. Some big red flags include typos, email addresses that seem off, or demands for payment.

If you’re unsure about a message don’t open it and certainly don’t start clicking on links or handing over any personal details as this could leave you in serious trouble.