OAKLAND, Calif. — Google employees are not shy about speaking up. In the last few years, they have openly confronted the company about building a censored search engine in China, the handling of sexual harassment claims and its work with the Pentagon on artificial intelligence technology for weapons.

But there is one subject that employees avoid at all costs: antitrust.

They don’t address it in emails. They don’t bring it up in big company meetings. They are regularly reminded that Google doesn’t “crush,” “kill,” “hurt” or “block” the competition. And if you hope to land an executive job at the internet company, do not bring up the A-word in the interview process.

As the U.S. Justice Department, a coalition of state attorneys general and a Congressional subcommittee have investigated Google for monopoly behavior over the last year, there has been little discussion internally about antitrust concerns. Now, as the department prepares to file a lawsuit against the company, the usual forums where Google employees debate anything and everything have been startlingly subdued about what may be an existential threat to it.

That’s because Google’s leaders have made it clear that antitrust is not a topic to be trifled with.

In compliance courses, employees of the Silicon Valley giant are taught what to say about it and how to say it. The legal department is looped into even innocuous emails to apply “attorney-client privilege,” another layer of protection from prying regulators. And while there is no written policy banning discussion of antitrust, a former executive recalled “coming down like a ton of bricks” on an employee who wrote flippantly about antitrust concerns.

The caution is not limited to employees. After Google interviewed a candidate for an executive job last year, that person sent a follow-up email to Sundar Pichai, the company’s chief executive. In the email, the candidate asked about the antitrust implications of a potential merger, according to two people familiar with the incident. An antitrust question to Mr. Pichai was seen as inappropriate, raising questions about the candidate’s judgment, the people said. While it did not disqualify the candidate, it was seen as a negative for their job prospects.

All of this has contributed to an unspoken understanding among Google employees that it is not wise to address the antitrust issues openly, said six current and former employees, who declined to be identified because they were either not permitted to talk publicly or feared retaliation.

“It’s seen as something you don’t talk about because there is no productive conversation associating Google with the word ‘monopoly,’” said Jack Poulson, a Google research scientist who left the company in 2018 and now works at a tech ethics nonprofit. “The reality is that Googlers are paid well and that’s because of the monopoly. In effect, the monopoly is on their side.”

Julie Tarallo McAlister, a Google spokeswoman, said the company has “standard competition law compliance trainings like most big companies. We ask our employees to compete fairly and build great products, rather than focus or opine on competitors.”

Some employees said the caution around antitrust is a byproduct of Google spending most of the last decade fighting antitrust cases around the world. They said a two-year investigation by the Federal Trade Commission, which ultimately decided in 2013 to not bring a case against Google, was the turning point that made the company more aware of regulatory risk.

Google is now extremely careful about what it puts in emails and company documents, and considers the antitrust implications of its business deals and strategy. One former executive said that after the F.T.C. started its investigation, the company determined that acquisitions to bolster its dominant search business, such as its 2010 purchase of ITA Software, a flight information company, were now off the table.

William Fitzgerald, a former policy and communications manager who left Google in 2018, said that while his policy team discussed antitrust strategy “ad nauseam,” it was not a topic widely talked about among the broader work force.

“The direction from top management was to focus on your day job,” said Mr. Fitzgerald, who now runs the Worker Agency, a strategic advocacy firm.

Some Google employees said they don’t talk about antitrust at work because they don’t care about it. One said it was not a meaningful part of their day-to-day jobs. Another said there were so many reports of antitrust investigations about Google in different countries that it all became white noise.

Google said that based on its internal data, employees were not interested in antitrust issues and did not raise it at company events. 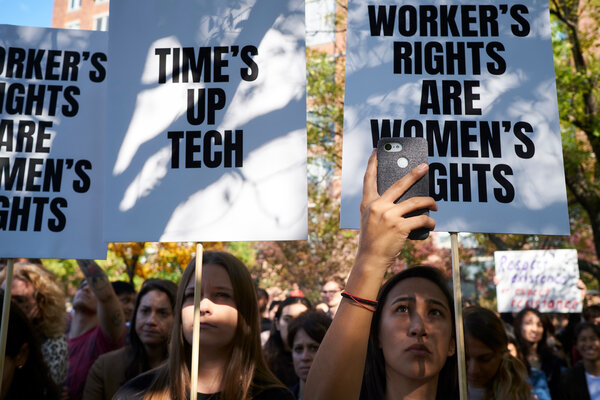 Yet the company still takes steps to be extra careful. All employees are required to take an annual online training course about how to communicate in a way to avoid legal issues with regulators. In the training, which was reported on earlier by The Markup, employees are told to assume that every document and email will end up in the hands of regulators, so they should refrain from using certain words or phrases.

“We are not out to ‘crush,’ ‘kill,’ ‘hurt,’ ‘block,’ or do anything else that might be perceived as evil or unfair,” according to a slide used in the training, which was reviewed by The New York Times.

The training seems to be paying off. One part of the compliance course instructs employees to avoid estimating the company’s market share. So in February when House lawmakers interviewed Google as part of an investigation into the power of tech giants, the company had an explanation for why it could not supply the market share data that would likely underscore its dominance. Google said it “doesn’t maintain information in the normal course of business” about the market share of its products, according to a report about the inquiry’s findings.

Employees said it was common to hear people in meetings declare that a sensitive subject is “not for notes,” referring to a written summary of the proceedings. This was especially the case when the conversation turned to how Google intended to compete with a rival or when participants discussed a competitor’s strategy.

In addition, Google employees often marked communication between employees as “A/C Priv,” which is shorthand for “attorney-client privilege,” in the subject line. Employees are told to include a lawyer among the recipients and to type “A/C Priv, seeking advice” in the body of the email, said four current and former employees.

While many companies take such measures to keep communications with lawyers confidential, Google is particularly aggressive, according to the current and former employees. Ms. Tarallo McAlister said Google informed employees “that privilege only applies to communications that seek legal advice or that are prepared at the direction of a lawyer.”

Often, emails that are not actually seeking legal advice are marked as privileged, including mundane presentation slides, minor bug fixes or inconsequential department memos. Ultimately, if the Justice Department or other regulators asked for those documents, Google would have the option of declaring them as secret communication.

“It’s a delay tactic,” said Sam Weinstein, a former official in the antitrust division of the Justice Department and a professor at Cardozo School of Law. “It can be effective if the government doesn’t have the manpower.”

In 2012, the Texas attorney general filed a civil suit against Google, accusing it of withholding 14,500 documents claiming attorney-client privilege during an investigation into the company. Greg Abbott, then the state’s attorney general and now its governor, said Google had not met the burden of proving that privilege was applicable to many of the documents.

In one example, he cited an email from a Google executive to his superior marked with “attorney-client privilege,” which was copied to a Google lawyer and five other employees. The discussion was about changing how to present reviews from other websites and how to present a recommendation to management. The bulk of the email was about “purely business matters” and did not seek or reference legal advice, the complaint said.

Years in the glare of the antitrust spotlight have appeared to make Google confident that it can handle the scrutiny. When asked about regulatory concerns and interest from the Justice Department in a conference call with analysts in July 2019, Mr. Pichai said the company was familiar with how to deal with the regulators.

“It’s not new to us,” he said. “We have participated in these processes before.”