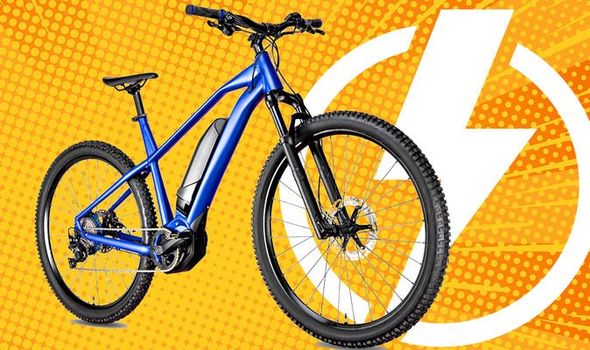 Despite the technology being around for a while, electric bikes have exploded in popularity in the last year or so. Since the national lockdowns, more people than ever before have turned to battery-powered bikes to get around. Data from the Bicycle Association shows sales of electric bikes spiked by 67 percent last year in the wake of the first lockdown.

Contrary to popular belief, the fact that electric bikes include a motor does not mean it’s not a good workout. Researchers from University of Bristol discovered that, while pedal-assistant bikes don’t give cyclists quite the same workout as a traditional push bike, it’s more of a full-body workout than walking. Electric bike enthusiasts also report that the presence of the motor, which kicks-in when the pressure on the pedals indicates that you’re struggling, tempts them to cycle more and on longer or more challenging routes.

Unfortunately, the barrier for many remains the price. Buying an electric bike can set you back anywhere between £700 to £5,000.

While the UK Government is looking to address this with an electric bike purchase subsidy later this summer, another way to save a little cash – and space in the garage – is to convert an existing bike into an electric one.

One of the most well-known kits is Swytch.

Swytch sells two kits – one designed for popular folding bicycle brand Brompton, and a “Universal Conversion Kit” that’s designed to work with almost every other type of bike. Whether you’ve got a mountain bike, a road bike, or a tandem …Swytch says its kit will add a pedal-assist motor that will give you a helping hand when you’re struggling uphill. 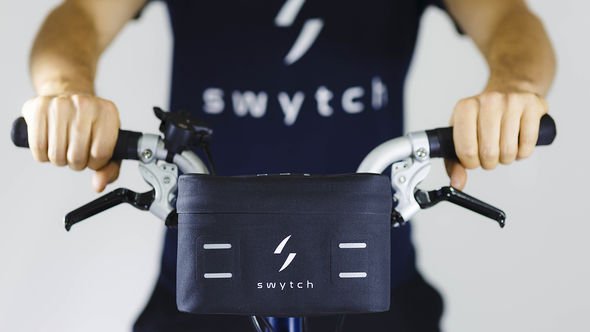 Both Swytch conversion kits ship in two parts – a motor wheel that replaces your current front wheel and a quick-release battery pack with some power control to mount on the handlebars. Thankfully, you won’t have to worry about constantly taking your hands off the handlebars to adjust the amount of assistance you’re getting on the bike. That’s because the Swytch kit comes with a cadence sensor that monitors how fast you’re pedalling and adjusts the amount of power being delivered to the front wheel accordingly.

Optional extras include a throttle, which lets you push a button to execrate without pedalling – although this does mean your humble bicycle could be classed as a moped. Swytch also offers brake sensors, which immediately cut the motor when you start to brake.

The battery pack adds 1.5kg to the weight of your bike, while the front wheel with the motor built into the hub adds another 1.5kg. 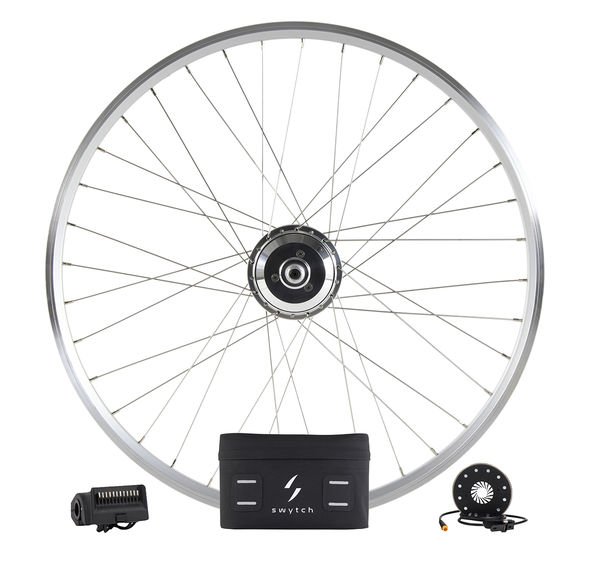 Swytch offers two battery specifications. First up, Eco adds 35 kilometres of range, while Pro gets you 50 kilometres between charges. After that, you can continue to ride… but the bike will be a little heavier than you remember. Eco will set you back £799, while the Pro version will set you back £999. That’s not cheap, but can work out much more affordable than a ready-made option.

Swytch is currently offering a 50% discount to anyone who joins the waiting list for the next drop of stock.