Ostensibly, Kentucky Route Zero is about a broken man delivering broken antiques down a broken interstate; a road that leads to bait shops and gas stations in one direction, different planes of existence in the other.

But it's not esoteric or weird simply for the sake of it. Beneath the whimsy lies intent, meaning. 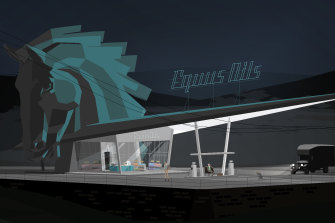 Kentucky Route Zero verges on art in its narrative approach.

There's a deep-seated bitterness bubbling beneath the surface of every surreal scene. A bitterness that would grow into rage if it wasn't so downtrodden and defeated. As the narrative gradually unfolds it peels back the layers on the lost souls you travel with, resigned to the injustice of blue-collar American life.

Through Conway, the main protagonist, players experience the callous indifference of a mining company towards its workers, the needless cruelty of a medical system designed to fleece before it cares, and a deeply personal tragedy caused in part by the need to self-medicate away the days. It's working class oral history through the filter of a peyote trip, as touching as it is odd.

More an interactive narrative than a traditional adventure game, Kentucky Route Zero doesn't allow you to shape narrative beats in any significant way, but it does let you colour them through dialogue choices. The book has already been written, but the game invites you to help turn the pages and scribble in the margins on occasion. 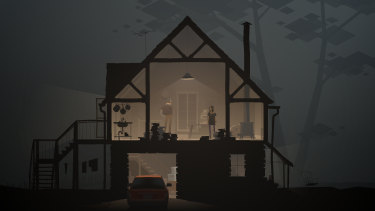 The narrative has already been written, but the game invites you to help turn the pages.

There aren't any fail states. Your interaction with the world is limited to selecting objects as you walk through the surreal shadowy environments, conversing, and solving puzzles so simple they barely qualify for the label. Reading is the game's primary mechanic; more of the playing of Kentucky Route Zero happens in your head than your hands.

But it's so successful at conjuring a mood, at telling a unique story – or rather an anthology of smaller stories that coalesce – that it didn't matter one iota my thumbs barely had to do anything.

Kentucky Route Zero is poetic, beautiful, profound and moving. And, if you care to dredge up a well-worn, now-tiresome debate, it's also one of the clearest pieces of evidence yet that video games should be considered art.

Kentucky Road is available on Nintendo Switch and is classified PG.