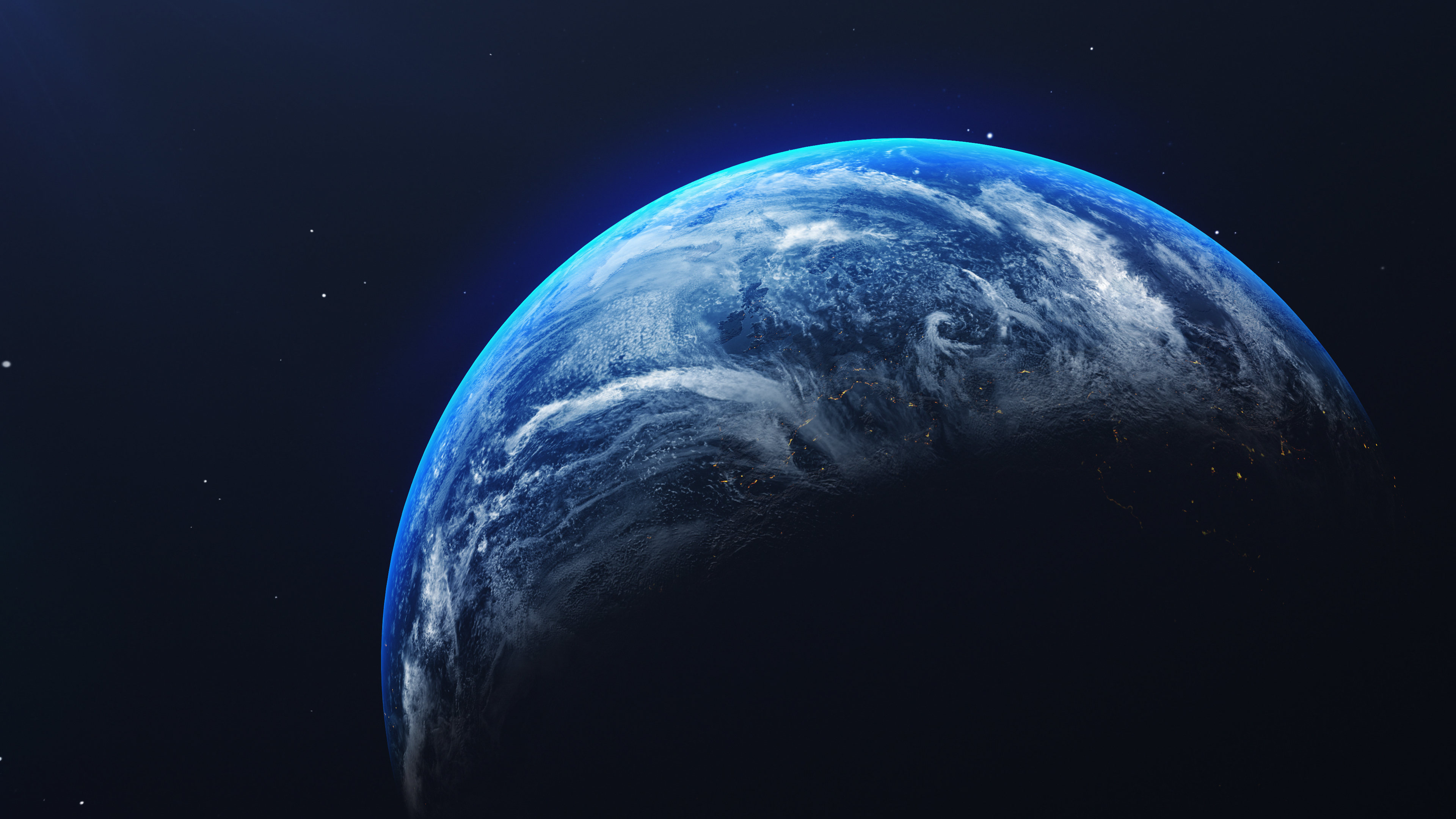 If you’ve had trouble getting to work recently, due to things like roads and rail lines warping due to heat or a casual wildfire sweeping across London, you mind may wander towards global warming.

As it happens, today is Earth Overshoot Day. The one day each year when humanity crosses the tipping point of annual ecological replenishment.

Sadly, that day has come earlier this year than ever before.

Despite a brief hiatus during 2020 when coronavirus battered supply chains, commutes, social events and just about everything else, Overshoot Day is getting earlier each year.

Or, to put it another way, we’re consuming the natural resources of 1.75 planets every year.

And while we’re all making individual efforts to lower our footprints, it’s also up to businesses to do their part.

‘The greatest potential for large-scale impact, however, lies with governments and businesses who align their policies and strategies with the reality of our finite planet.’

So leaving aside your own personal decision to cut your footprint, what can your employer do to help climate change and, in turn, lower the risk of more devastating heatwaves?

The good news is that, generally, companies are made up of human beings and in most cases, human beings want to do better for the climate.

‘It’s less about attitude and more about the how,’ explains Sam Jackson, a senior climate and environmental impact manager at Ecologi.

‘It’s a case that a lot of the traditional wisdom is “well if you’re a huge corporation with lots of entities and employees, you can feel a bit like changing is really hard” because you have set ways and set processes and you have to keep making money and you have to keep the board happy.

‘It can feel a bit like you’re trying to steer a cruise ship and any change is going to happen inch by inch.

‘But that’s exactly where we step in and have that guiding hand to help turn the needle.’

The team at Ecologi are diligently trying to help businesses go green. Whatever the reason is, whether it’s a PR thing, a regulatory requirement or just a desire to do the right thing. The company has a platform currently in beta called Ecologi Zero that acts as a one-stop shop for businesses to identify how they can change and then take concrete steps to do so. Here’s the sign-up page.

Obviously, there is no one-size-fits all solution to the problem. But there are a few areas that are more broadly applicable.

‘Most of a business’s emissions will come from Scope 3, which is to say value chain or supply chain stuff,’ Jackson told Metro.co.uk. ‘It’s usually travel and transport.’

‘Those kind of interventions can be really effective, easy wins.

‘If you’re sending people around the world on flights, that’s where most of your emissions are going to come from.

‘So, we might say, have you considered fewer trips by flights and implementing a sustainable travel policy?

‘Also, rather than compelling people to drive to the office, just say that sometimes employees can work from home or go completely hybrid or completely remote.

‘Those kind of interventions can really chip away at the problem.’

One of the best options availabe to businesses is the Cycle to Work scheme, which prompts employees to use two wheels instead of four to get to the office.

The Cycle to Work scheme is a government initiative that hopes to encourage employees to use a bike as their mode of transportation to commute to and from their workplace.

As of last year, the scheme has been used by 40,000 employers in the UK and claims to have helped more than 1.6 million commuters to cycle to work.

The scheme, which was launched in 1999, works by an employer essentially buying a bike for their employee and then the employee ‘hires’ the bike bought by their employer over the course of a year using salary sacrifice.

At the end of the 12-month ‘hire’ period, the employee then buys the bike from their employer for its HM Revenue & Customs (HMRC)-approved Fair Market Value (FMV).

The benefit of the scheme is that the money taken from your salary each month to pay towards the bike is pre-tax and before any National Insurance contributions  – so the money comes out of your gross salary, not your net salary. This would save you money on both your income tax and National Insurance contributions – although obviously that money would then be going towards a bike.

It may seem small, but if a business has an on-site cafeteria, switching to a more plant-based offering could be an excellent way to decrease its carbon footprint.

Studies have found that food production accounts for one quarter of the world’s greenhouse gas emissions – and takes up half of the planet’s habitable surface.

And, according to the UN’s Food and Agricultural Organisation (FAO), meat and dairy, specifically, account for around 14.5% of global greenhouse gas emissions.

The production of meat is also linked to deforestation – as trees are removed to make way for cattle farming. What’s more, fire is often used to remove this greenery which, as a result, releases huge amounts of carbon dioxide (CO2) into the atmosphere.

So you can see that having the office cafeteria stock more plant-based options can help curb this gigantic problem.

And, generally speaking, it’s better for your health too.

‘The climate crisis really is a health crisis and we can’t detach the two,’ explains Dr Shireen Kassam, who founded the Plant Based Health Professionals network.

‘Moving towards a plant-based food system is clearly one of the biggest impacts we can have [on the environment], but I think people forget it’s a personal health issue too,’ she told Metro.co.uk.

Now, we’re not expecting you to go marching into your boss’s office and demanding to see the business’s energy bills.

But, it’s worth using any influence you have to recommend shifting to a sustainable energy source. This could be as simple (if you’re a small business) as calling up your supplier and seeing what they offer.

Larger companies may need to put in a bit more work.

Lets take Microsoft for example. Over a decade ago, in 2011, the tech giant had an environmental and sustainability executive called Rob Bernard.

Bernard told Microsoft’s risk-assessment team to poke around and find out what the deal was with its exposure to the energy market. The results were that increasing regulations on carbon emissions and volatile energy costs meant it was in Microsoft’s best interest to pay a little closer attention.

The company formed a centralised senior energy team with the task of developing a comprehensive plan to mitigate the risk. It comprised 14 experts in things like battery tech, renewable energy and the electricity industry.

They were given the authority to report all the way up to the top brass and make energy consumption a key pillar of the company’s roadmap. As Bernard told the Harvard Business Review: ‘Energy has become a C-suite issue.’

‘The CFO and president are now actively involved in our energy road map.’

Obviously, Microsoft is one of the richest and most well-known corporate powerhouses on the planet. But even in smaller businesses that don’t have time or money to bring in a team of experts, there are some very small and very obvious changes that can be made.

Things like reducing the electricity usage outside shop hours or turning down the aircon seem like no-brainers.

Similarly, how about only using energy efficient bulbs in shops or offices and swapping open refrigeration units for closed ones in supermarkets or office kitchens?

All these things, when combined, will gradually help shift a company’s reliance on fossil fuels and, in doing so, push Earth Overshoot Day back.

It’s also important to remember that although the figures can seem bad, the awareness and desire to change is present in millions of companies around the world.

‘We have an opportunity to build something much better,’ said Sam Jackson. ‘Something more sustainable. Little climate solutions like green spaces in cities make people happier, make people spend more time with their community, more time outdoors and more time being active.

‘The message to businesses that we have is to jump aboard.’