NBA legend Kareem Abdul-Jabbar is the first to remind people that records are temporary but the achievements of the NBA’s all-time leading scorer will be exposed to a new generation of fans when the NBA 2K22 video game is released in September. 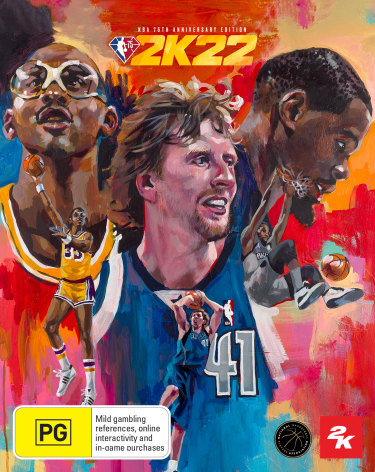 The NBA 2K series has been running since 1999 but has largely kept its cover athletes to modern superstars or the likes of Kobe Bryant and Michael Jordan along with current players.

Abdul-Jabbar won six NBA titles, six MVP awards, two finals MVP awards and 19 all-star appearances in his 20-season career between 1969 and 1989 while his iconic sky-hook shot accounted for many of his 38,387 points.

Durant wants Abdul-Jabbar’s stellar career to receive a boost on the cover of a game that sales millions of copies each year.

“It feels good to see Kareem because he’s usually underrated when it comes to all-time greats,” Durant said.

“He’s the all-time leading scorer, created an unguardable shot, won multiple championships, MVPs, so to see him continuing to be around the community of basketball and be involved with 2K and be on the cover is pretty cool.”

Abdul-Jabbar’s player has featured in the game in previous years in historic or all-time teams along with the game’s MyTeam section.

“When they see me on there, maybe they might be inspired to check out what I did and how I did it and the length of time that I did it over,” Abdul-Jabbar said.

“I think all of those factors are to be considered in understanding someone’s abilities and greatness in the game.”

If LeBron James, 36, continues to thrive in the NBA he could potentially beat Abdul-Jabbar’s scoring record with James in third place just over 3000 points from the record.

“I don’t know if he’s going to be able to catch up to me,” Abdul-Jabbar said.

“He’s going to have to stay healthy. We’ve had a few incidents where he’s injured himself. So, it’s all about how long you can play safely without risking your health permanently. And I wish him well. I hope he stays healthy and we’ll see what happens.

“I’ll be happy to congratulate him because the records are only there to see how well we’re doing, as a race.

“Any one person who holds a record has to understand that it’s a very temporary thing.”

At 218 centimetres, Abdul-Jabbar was raised in an era when coaches refused to let big men dribble the ball or shoot three-pointers.

Durant, who is 208cm, has played his NBA career as an outside player who shoots threes and handles the ball.

“I think that was inevitable, you know?” Abdul-Jabbar said.

“Saying that if you’re over a certain height you can’t handle the ball is nonsense. KD has proved that at 6′11 [2.1 metres] being able to handle the ball like he does and you can’t take it from him, and when he wants to shoot it, he can get a shot off.

“That’s someone who has really developed all aspects of the game. And there is no reason why a seven-footer can’t do it if the smaller players do it.”

Abdul-Jabbar made only one three in his career and he wondered what sort of player he would be in today’s game.

“I think I’d still be a post scorer today because my shot really was consistent. I shot something like 56 per cent lifetime, so they would want me to be taking two-point shots,” Abdul-Jabbar said.

Durant said he was honoured to join two legends on the NBA 2K cover. Current Dallas Mavericks superstar Luka Doncic will be on the cover of the game’s standard edition.

“I can’t really even describe how it feels. When I seen the cover, I was just blown away because I worked my whole life to be in the conversation with those guys. So, to kind of have a stamp with the 2K cover, I can definitely show my friends and brag a little bit, but it’s a true honor for sure.”