Hipster Whale, the Melbourne-based game studio behind the hugely popular Crossy Road, has announced a new game in the series which will be exclusive to Apple Arcade.

Called Crossy Road Castle, the new game borrows the visuals and characters of the original hit — which has been downloaded more than 200 million times — but swaps out the Frogger-style road-crossing for more Mario-style platforming and a focus on multiplayer. 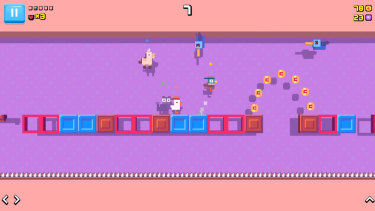 Crossy Road Castle is a platforming game for up to four players, playable across iPhone, iPad, Mac and Apple TV.

Castle is the first game since Crossy Road to be developed wholly by Hipster Whale — which was founded by Matthew Hall and Andy Sum in 2014 — although the pair has worked with others to create games like Pac-man 256 and Disney Crossy Road in the years since.

Launching later in 2019, Castle will only be available through Apple Arcade, the iPhone-maker's new subscription service that gives access to a library of ad-free, transaction-free games for $8 per month. The games are all new and not playable on any other mobile platform, including the regular Apple App Store.

For Hipster Whale, having the game's development funded by Apple freed them up to focus on crafting a fun experience, without having to bolt in ways to make money.

"To not have to worry about a business model at all, it's been really great," says Hall. "We really designed the game for Apple Arcade, to take advantage of all its features. We don’t have plans to bring it to any other platform."

As a local multiplayer game, Castle supports up to four players on any combination of Apple devices. For example you could have four iPhones, or one Apple TV with four controllers (Arcade supports Xbox One and PlayStation 4 controllers, as well as those designed for Apple devices). Or you could mix and match with people on iPads or Macs.

Since Apple Arcade includes access for up to six family members, Hall says the game is designed for families to play together.

I played the game alongside Hall, and though it's not finished the multiplayer aspect worked seamlessly, with the two iPhones finding each other and connecting in a second.

Castle takes place in a series of small rooms which make up a massive tower. Rooms are chosen on the fly from a large pool, with some having you solve simple puzzles and others having you avoid deadly obstacles, and the exact contents are tweaked procedurally so playing through the tower should feel a bit different each time. Regardless, the tower is designed to get more difficult as you climb.

Since this is an Arcade game you won’t be watching ads to unlock characters; coins are liberally spread throughout the rooms for you to grab. We played as a horse and the iconic Crossy Road chicken. Hall says in addition to characters you can also unlock hats to wear.

As the team creates new towers (there’s currently only one), they’ll be added to the game at no extra cost. Hall says Hipster Whale will add new content throughout 2020, and then "for as long as we feel like making them". 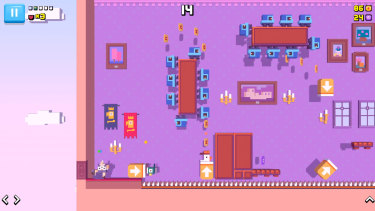 The game has the same fun chunky look and goofy instant deaths as the original, but the co-operative nature means dying feels less punishing. As long as someone survives they can still get everyone to the next room, and if you all die you have a few lives to try again.

Hall and I made it all the way past room 30, at which point we tried and failed to take on an egg-spewing boss based on the infamous eagle from Crossy Road.

Apple Arcade includes access to more than 100 games, but it hasn't quite reached that level yet. At present there are more than 70 other games on the service, including six others from Australian developers.