Creating a commonplace book is somewhat like marking your favorite lines in a novel with the Amazon Kindle highlights feature — except your personal one-stop knowledge repository can also include song lyrics, movie dialogue, poems, recipes, podcast transcripts, and any inspiring bits you find in your reading and listening. The commonplace book is not a new concept: Copying down your favorite lines from other people’s works into your own annotated notebook was a standard exercise in Renaissance Europe, and the idea can be traced to the Roman era.

But here in the modern world of digital connectivity, you don’t have to keep everything in one physical location. With the right app, you can use your smartphone, tablet or computer to collect and sync up new content for your collection — and use the search function later to find specific entries. Here’s how to get started making a digital commonplace book — or how to convert that battered notebook of thoughts and quotes you’ve been keeping all along.

If you’ve never made a commonplace book before, first learn how others have used them. Academic libraries, along with museums, are home to many commonplace books, and you can see them without leaving the couch. John Milton’s commonplace book is on the British Library site, and the personal notebooks of other writers and thinkers pop up easily with a web search.

The Yale University Library has scanned pages of historical commonplace books in its holdings, and the Harvard Library has a few in its own online collection, as well as images of a version of John Locke’s 17th-century guide to making commonplace books, which was originally published in French. And the Internet Archive has hundreds of digitized commonplace books for browsing or borrowing, including one from Sir Alec Guinness.

Notes for Your Notes

For sheer simplicity, collecting your commonplace entries in a word-processing document stored online is one option. If you find that approach unwieldy, consider the note-taking app that came with your phone — Apple’s Notes or Google Keep. Just enter quotations and other text snippets whenever you get the urge. To skip the typing or pasting, Google Keep can scan and transcribe text from images of book pages, and Apple’s Siri voice assistant or the Google Assistant can create a note and take dictation.

You can also use your notes app through your computer’s web browser, where it’s often easier to cut and paste items and apply text formatting. Your changes will update across all the devices, as long as you’re logged into the same Apple ID or Google Account everywhere.

Use a Dedicated App

If you’d rather reserve your phone’s notes app for daily life, plenty of specialized notebook and journal apps await you. Some apps include features like keyword tagging to help organize your commonplace book by theme or topic. Most apps offer a basic free version but require a fee for certain features; for example, the Bear app for iOS and Mac devices requires a $15 annual subscription to sync among devices. 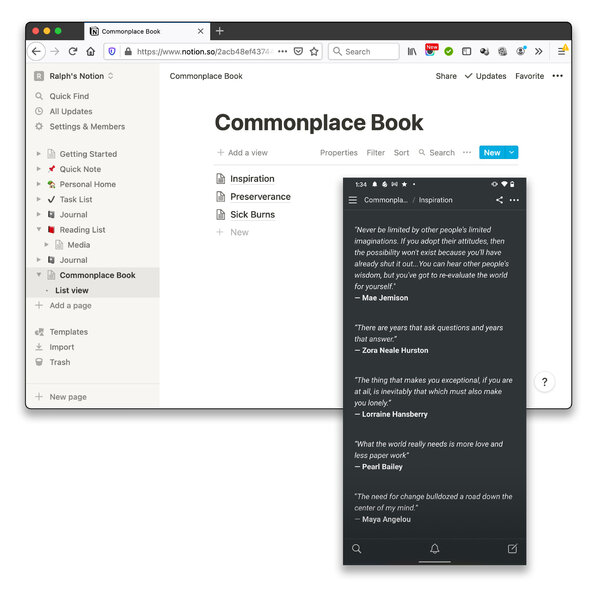 Detail-oriented people may appreciate Notion, an expansive writing and organizing app that includes page templates and a clipping tool for saving parts of webpages to a note. Evernote, a longtime player in the mobile commonplace category, has templates and a Web Clipper function of its own, and an Apple Watch app.

Day One, the popular personal journal app for iOS-based hardware, has its own Apple Watch and desktop versions. Daybook, another journal app, runs on Android, iOS and web browsers — and works with Alexa, Bixby and Google Assistant so you can create entries by voice or have them read aloud.

But if you require just a no-frills, no-distraction tool for text-based entries into your electronic commonplace book, there’s Simplenote. And it’s free.

What if you’re someone who has been keeping a physical commonplace book for years but would like to digitize the whole thing without retyping it all? One method: Snap a photo of each page and import the image into your notes app, which also preserves the look of your original hand-scrawled entries.

You could also use a scanning app to convert your original book to a PDF. Evernote, for instance, has a document-scanning tool and can search handwritten text. And just as it can transcribe the passages from books you want to add to your collection, Google Keep can store pictures of your original commonplace book pages and take a swing at transcribing your scribbles into editable text.

As for Kindle readers who have been marking passages in their e-books for years: You can see all your highlights at https://read.amazon.com/notebook and decide which lines you’d like to add to your commonplace book.