With its shiny, static open world, tryhard humour and boring but technologically interesting multiplayer mode, Crackdown 3 feels like a 2007 game. Whether or not that's intentional, it's often not flattering. And yet, when you turn your brain off, it is possible to be sucked in and embraced by the stupid fun of the gameplay loop; one that's designed to keep you constantly moving from task to task in the game's sprawling, blocky city.

Having never played the original Crackdown (which actually was a 2007 game) or its sequel, I can't say for sure how this latest entry lives up. But at the very least you needn't worry about finding out any narrative background before you jump in. Everything you need to know is screamed by Terry Crews in the game's first five minutes before you're dropped alone into a rote neon dystopia and tasked with taking down its corrupt leaders. 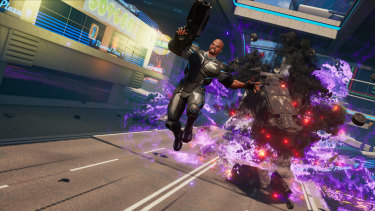 Unfortunately, this is one of the rare occasions where adding Terry Crews doesn’t magically make your product golden.

This is a "go anywhere, do anything" type of game — kind of like a Saint's Row or Grand Theft Auto III on speed — with a map covered in challenges to overcome, and a free-wheeling objective system in place of structured missions. Movement and combat are slick and fast, with areas divvied up between the various bosses. Once you've wreaked a set amount of a certain kind of destruction, one of the bosses will find you for a dramatic showdown.

Meanwhile Crackdown's core concept is its "skills for kills" system. Whenever you destroy something you earn points against a certain aspect of your skillset. Nailing headshots will level up your shooting abilities, side-swiping dudes in your car will give you more options while driving, pummeling enemies to death at close range will make you a more proficent brawler, and so on.

The only exception is when it comes to increasing your agility, which doesn't require killing at all. Instead, green collectible "agility orbs" litter the world's hard-to-reach places, and are ingeniously placed so that once you've grabbed one you're usually in just the right spot to see another. Several times I had to force myself to stop mechanically hunting orb after orb and get back into the main game.

The main downside here is that the things you'll be doing most – like jumping and shooting – are rarely fun owing to the repetitive missions structures and objectives and very basic controls. Killing a horde of robots at one of the many monorail stations, for example, is general just a matter of running a loop around the building and alternating taps on the left and right triggers to shoot enemies in the head. This is compounded by the fact that you gradually unlock the fun abilities and weapons as you go, so the early going is dull indeed. It does eventually hit something of a stride, with some good weapons allowing for genuinely creative destruction, but even at its best Crackdown 3 feels like a big chest of explosive, physics-driven toys to play with in a playground that's left wanting.

That's particularly true of the online competitive mode, which is hosted on powerful servers with the promise of destructible environments too complex for a console to process locally. But in practice matches are repetitive kill-fests with none of the play and experimentation that makes the campaign occassionally satisfying. A lot of the level is destructible, but crashing through it has all the impact of dropping a piece of styrofoam off a couch or tearing a brown paper bag in half.

There's a spark of something alluringly fun at the core of Crackdown 3, but the bulk of the actual content just isn't strong enough to nurture it. Progress is slow, combat is repetitive, getting around can be janky, graphical detail is minimal and the constant chattery jokes fall mostly flat. Even the effervescent Crews is underutilised here, resigned to providing little more than some catch phrases and his likeness for one of the several mostly-mute playable characters. It's clear the aim here was to evoke the early era of open-world games, but unfortunately there's just not much interesting being done besides that.

Crackdown 3 is out now for Xbox One (reviewed) and PC.