The scientists, including John Hennessy, the executive chairman of Google’s parent company, Alphabet, are all winners of the Turing Award, which is often called the Nobel Prize of computing.

In a group interview, four of the scientists said the Trump administration’s restrictive immigration rules were a threat to computer research in the United States and could do long-term damage to the tech industry, which for decades has been one of the country’s economic engines.

“The most brilliant people in the world want to come here and be grad students, but now they are being discouraged from coming here, and many are going elsewhere,” said one of the scientists who organized the endorsement, David Patterson, a Google distinguished engineer and former professor at the University of California, Berkeley.

The Turing winners are the latest members of the scientific community to find their political voice as the election nears. The research journal Scientific American also endorsed Mr. Biden this week, citing, among other criticisms, Mr. Trump’s response to the coronavirus pandemic and his skepticism of climate change. It was the first time in its 175 years that the publication endorsed a presidential candidate. 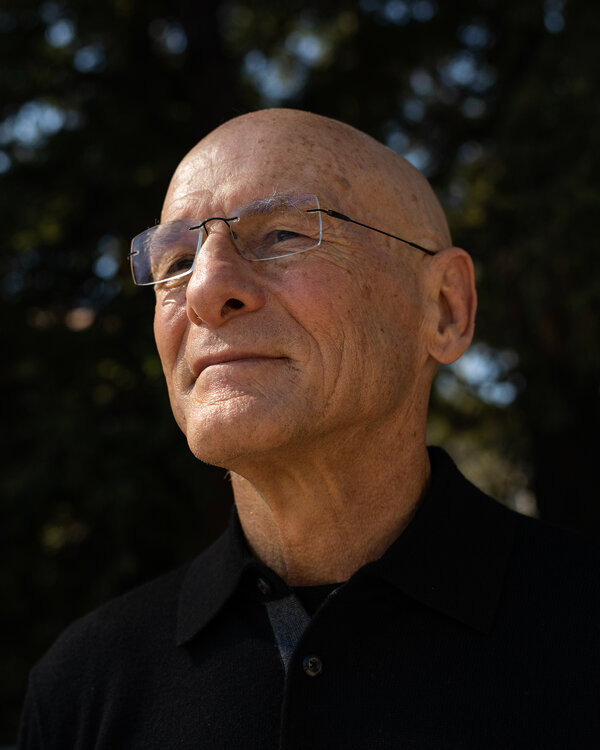 The Turing winners’ endorsement — also a first for them — was made against the backdrop of the Trump administration’s increasingly antagonistic relationship with the tech industry. Several federal agencies are investigating the business practices of tech’s biggest companies, and the Justice Department could bring an antitrust case against Google as soon as this month.

A number of large tech companies, including Google and Facebook, have often spoken out on immigration issues. A week after Mr. Trump’s inauguration, the Google co-founder Sergey Brin joined protests at San Francisco International Airport over the administration’s ban on travel from several predominantly Muslim countries. Days later, Mr. Brin and Google’s chief executive, Sundar Pichai, spoke at a similar protest by the company’s employees at its headquarters in Silicon Valley.

The collective statement by 24 of the 35 living American Turing winners, including senior scientists at Google, Facebook and Microsoft, lends considerable gravitas to industry concerns about Mr. Trump’s immigration polices. Among them are researchers who have invented technologies that became the building blocks of the global internet. 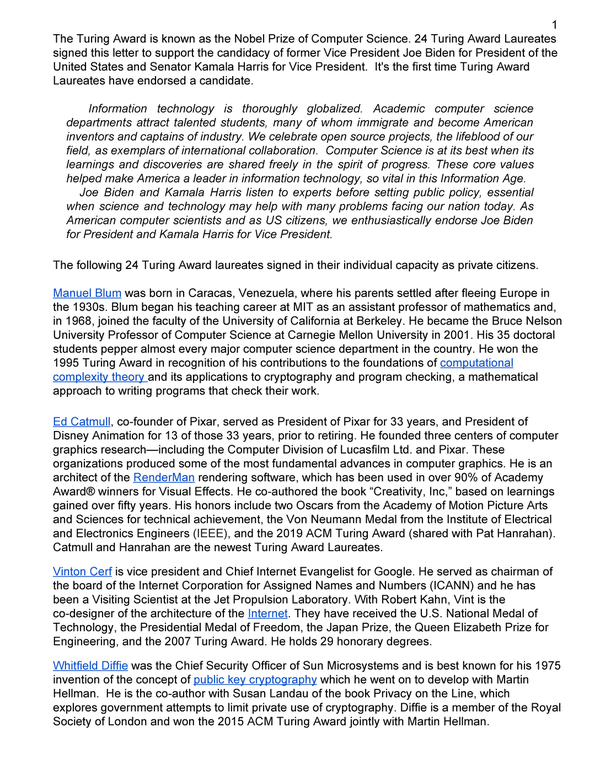 Vinton Cerf, for example, helped invent computer networking technology that is fundamental to how computers interact. Now a vice president at Google, he also received the Presidential Medal of Freedom from President George W. Bush in 2005. Yann LeCun, the top artificial-intelligence scientist at Facebook, helped develop techniques that power everything from the vision systems in self-driving cars to talking digital assistants like Siri. Ronald Rivest, a Massachusetts Institute of Technology professor, and Martin Hellman, a Stanford University professor emeritus, helped invent the encryption method used in e-commerce.

Dr. Patterson and Dr. Hennessy, who is also a former president of Stanford, shared the 2017 Turing award for ideas that underpin 99 percent of all new computer chips.

All 35 American Turing winners were invited to join the endorsement. Some did not respond because of poor health, and some declined to participate, at least in part because they did not want to pull their employers — whether companies or universities — into a politically charged situation, Dr. Patterson said.

Dr. Hennessy declined to be interviewed. Dr. Patterson, saying he was speaking as a private citizen, said, “We have to step out of our comfort zone and make a statement.”

Google and Facebook declined to comment. A Microsoft spokesman said this was “not an official company endorsement.”

Mr. Trump’s immigration policies have worried technology researchers since his election in 2016. Much of the country’s science and tech talent comes from abroad, and more restrictive policies could hamper the country’s efforts to develop technology in increasingly important areas, including artificial intelligence and quantum computing.

Now, with the souring of the U.S.-China relationship, the Trump administration has limited visas for Chinese graduate students and is planning further restrictions on such visas.

“There is an increasing tendency to assume that the best thing we can do is prevent China from interacting with the U.S. tech ecosystem,” said Matt Sheehan, an analyst with MacroPolo, a think tank that promotes ties between the United States and China. “But that ignores the fact the U.S. is the overwhelming winner when Chinese technologists come here, study here, work here and stay here.”

Brian DeMarco, who heads a new quantum computing center at the University of Illinois funded by the National Science Foundation, said there was no way of staffing the massive lab without drawing on large numbers of foreign nationals.

The Turing winners worry that Mr. Trump’s crackdown will expand if he is re-elected, preventing the kind of technological and economic growth enjoyed by the United States over the past half-century. Their own ranks include several immigrants, including Raj Reddy, who won the Turing Award in 1994 for his work with artificial intelligence technology.

Dr. Patterson added that the chief executives of four major American tech companies — Google, Microsoft, Nvidia and Tesla — immigrated to the United States. “Are we excluding future Elon Musks from the country?” he asked.

Some policy experts warn that while immigrant researchers are an important part of American technological progress, the United States still has to balance attracting talented engineers with reasonable concerns about foreign espionage inside universities, businesses and government labs.

“Espionage will always happen, from countries that are allies and partners and those that are competitors such as China,” said Pavneet Singh, a fellow with the Brookings Institution who has closely tracked China’s efforts to become a world leader in technology.

Dr. Patterson and other Turing Award winners acknowledged that concern. But they said the balance between immigration and security had slid too far away from welcoming new researchers to the country.

“We want a president who listens to the experts,” Dr. Patterson said.

The F.B.I. director warned of Russian election interference and white supremacist violence, in testimony that contradicted efforts by President Trump and other officials to downplay the threats.

Early voting for the presidential election starts in September in some states. Take a look at key dates where you live. If you’re voting by mail, it’s risky to procrastinate.

Keep Up With Our Coverage

Get an email recapping the day’s news