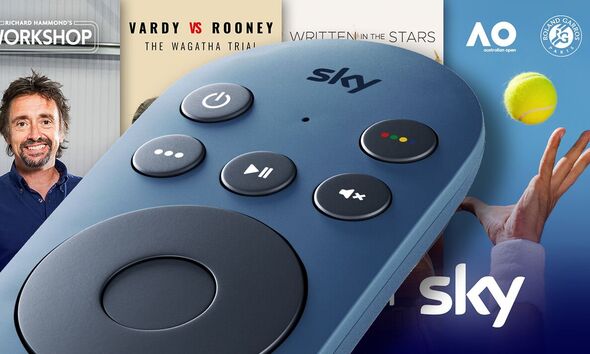 Millions of Sky customers have been treated to more content this month without it adding a penny extra to their monthly bills. This blockbuster update, which is one of the best Sky deals in a while, brings Discovery+ to TVs with this streaming platform offering shows and documentaries on demand. It now joins a growing number of other premium streaming services that are also totally free to watch and, if you have Sky, here’s what’s on offer and how to get it.

WHO GETS IT FREE? Available to all Sky Q, Sky Stream and Sky Glass TV users (Sky Q Lite customers will sadly miss out).

DISCOVERY+, WHAT’S INCLUDED? Perhaps the biggest reason to sign up for free is that you’ll get full access to the 2023 Australian Open and Roland-Garros tennis plus there’s also every stage of the Tour de France. Along with some top sport there’s a swathe of other things to tune into including real-life courtroom drama Vardy vs Rooney: The Wagatha Trial, docu-series Richard Hammond’s Workshop and award-winning Peter Crouch: Save Our Beautiful Game. Viewers will also be treated to exclusive originals, true-crime, motoring, documentaries and plenty of reality shows to tune into via the streaming service.

WHO GETS IT FREE? Available to all Sky Q, Sky Stream and Sky Glass users who subscribe to a Sky Cinema package.

PARAMOUNT+, WHAT’S INCLUDED? As the name suggests, Paramount+ is the streaming service for Paramount Pictures. As such, it brings together a vast number of popular film franchises from the Hollywood studio, including the Mission: Impossible film series and the Tom Cruise-fronted thriller Jack Reacher, based on the best-selling book series. Top Gun: Maverick also recently arrived on the platform along with films such as Scream and Clifford the Big Red Dog. There are also boxsets such as Yellowstone and documentaries to watch. Those signing up will find full access to Paramount+ along with MTV, Nickelodeon, ShowTime and Comedy Central.

WHO GETS IT FREE? Available to all Sky Q, Sky Stream and Sky Glass users plus it’s free on NOW as well

PEACOCK, WHAT’S INCLUDED: This platform, which launched in the US last year, features a host of top-notch content including The Office, Rutherford Falls, Saved by the Bell, Equalizer, Young Rock, Kardashians, Suits, Downton Abbey, and more.

Despite this being a premium offering, Comcast says there won’t be any extra fees to pay for those wanting to watch via their Sky Q box and there’s also good news for users of NOW (formerly NOW TV) as Peacock will also be available on that streaming platform as well.

SAVING: Peacock is currently only available to those with a Sky bundle

WHO GETS IT FREE? Available to Sky Q, Sky Stream and Sky Glass users on certain plans.

NETFLIX, WHAT’S INCLUDED? Netflix basic now comes bundled as part of many of Sky’s current plans. It’s even included when buying the cheapest Sky Stream package which costs just £24 per month. Netflix features award-winning exclusives, movies, documentaries and boxsets. Most recent additions include Glass Onion: A Knives Out Mystery, Bank of Dave and Harry & Meghan. There are also popular shows such as Drive to Survive and The Crown.

WHO GETS IT FREE?