Famed as one of the original viral videos, Charlie Bit My Finger was sold for £538,000 ($760,999). The family auctioned the video as a non-fungible token (NFT). Charlie Bit My Finger was uploaded to YouTube in 2007 and was viewed more than 880 million times. The adorable video shows Charlie Davies-Carr, who was a baby at the time of filming, biting the finger of his big brother, Harry Davies-Carr.

The Davies-Carr family auctioned the clip as an NFT on Sunday to commemorate the 14th anniversary of the video’s upload.

After a dramatic bidding battle, an anonymous account called ‘3fmusic’ outbid ‘mememaster’ for the clip.

An NFT is essentially a certificate to say you own something digital, such as viral videos, memes or tweets. Having an NFT means you can prove that the specific item you own is authentic.

If someone owns that NFT, nobody else can own it unless it is sold or given to them. 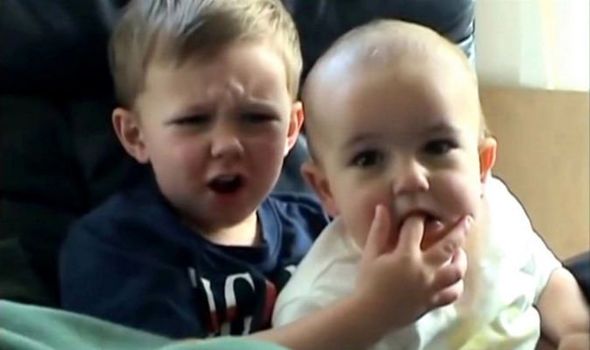 An NFT does not buy the copyright itself and the original creator can still show their work wherever they choose. An NFT is only a record of ownership or authenticity that is stored on the blockchain.

Nyan Cat, an animated flying cat that leaves a rainbow trail, sold for roughly $580,000 in February.

Mr Davies-Carr reportedly only uploaded the video to YouTube because he wanted to show it to the boys’ godfather who lived in America, but the file was too large to send over email.

Quickly, the video became an internet phenomenon and the family have made more than £100,000 in the last 10 years.

Money from the video allowed the family to send Charlie, Harry and their two brothers to private school.