The co-founder of billion dollar link-in-bio platform Linktree says he has been surprised by how quickly and severely the technology sector has been downgraded by investors but declared his firm is in good shape to ride out the slump.

The Melbourne-headquartered ‘unicorn’, which allows users to create simple websites that often serve as a repository of links to celebrities and influencers’ social media accounts, was last valued at $US1.3 billion ($1.8 billion) when it raised $US110 million from investors in March.

Since then, tech valuations have been pummeled amid concerns about rising inflation and higher interest rates. Publicly listed stocks such as Netflix and Spotify have shed more than half of their value while privately held start-ups such as Canva have also been marked down sharply by investors. 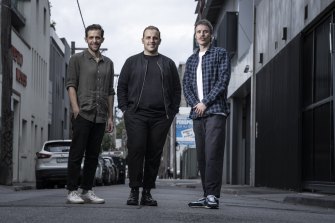 “I think this actually came on thicker and faster than anyone anticipated,” Linktree co-founder Alex Zaccaria said. “[But] we raised very recently, a significant amount of capital and so we’re in a really great position to be able to ride it through, with a long enough runway to be able to see it through.”

Linktree, which created the link-in-bio market in 2016, changed its visual brand on Monday as it tries to stay ahead of a dozen or so rival services by adding new features to help online personalities build their followings and get paid while not overwhelming new users.

It has a new colour pallette, designed by an agency called COLLINS whose aesthetic has become a hallmark of many online businesses from game streaming service Twitch to audio company Spotify and share trading platform Robinhood. 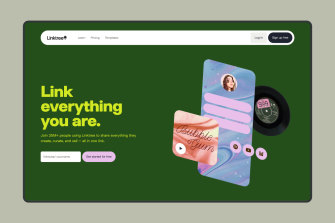 Linktree has unveiled a new brand image, including a fresh logo.Credit:Linktree

Linktree makes its money by charging between $US5 and $US24 a month for features not available on its free version, such as collecting emails and tools to better analyse a users’ audience.

As interest rates and inflation rise, investors across the technology sector are increasingly demanding that firms show they have a path to profitability, making it important for Linktree to grow its paying subscriber base.

But a large part of Linktree’s appeal, which has seen it almost become an eponym for the category, is its simplicity, posing a challenge as it adds more features. “Yeah, it’s literally the one thing that we are constantly filtering everything we do through like, how do we combat overwhelm?” Humphreys said.

Its solution is to try to automate as much of building a website as possible, providing only the tools that a user needs.

The new brand comes with a new font, Link Sans, which was custom-made by a company called Average Type Service which co-founder Humphreys found via its Linktree. The font is designed so that it eventually will be able to render characters from languages other than English in a consistent style.

Zaccaria said the company was “taking our foot off the pedal very slightly on hiring but we’re definitely not at the point of pausing [hiring] or anything like that yet. We’re still all growth.”

The Market Recap newsletter is a wrap of the day’s trading. Get it each weekday afternoon.