BT has announced a very tempting discount for its broadband customers which will allow them to access the latest sports action at a much-reduced price. In fact, the deal offers a whopping 50 percent off the firms Big Sport package which cuts the price from £40 down to just £20 per month.

As a quick reminder, The Big Sport package – which is part of BT TV – includes all four BT Sport channels and BoxNation, plus all 11 Sky Sports channels via the NOW TV Sky Sports Pass.

That means those subscribing will be able to watch all of the Premier League matches which are about to be broadcast across the nation.

BT Sport has confirmed that it will kick off with a doubleheader of Watford v Leicester City at 12.30pm and Brighton & Hove Albion v Arsenal, the first Premier League game to be shown at 3pm on a Saturday, both will take place on June 20. These will be followed by the midweek games, Newcastle United v Aston Villa and Wolves v Bournemouth on Wednesday June 24, with Chelsea v Manchester City on Thursday June 25 and Aston Villa v Wolves on Saturday June 27. 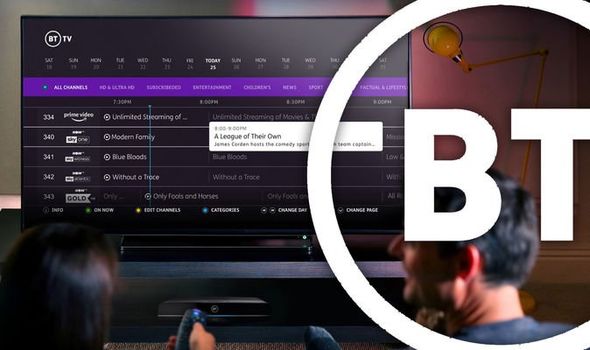 In the coming weeks, BT Sport also says it will be launching ‘Watch Together’, an exciting new social innovation, allowing customers using the BT Sport App to watch, see and chat with friends in a split screen, while the match is being played. And the broadcaster will also continue to make the majority of games available using the latest broadcast technology, offering the best pictures and sound available in 4k HDR with Dolby Atmos and in 360° on the BT Sport App.

Speaking about the news, Simon Green, head of BT Sport said “We are pleased that the Premier League resumption will give viewers a packed schedule of live football in June as the sport makes its return.

“With every fixture from the Bundesliga, twenty Premier League games and the return of the FA Cup, BT Sport viewers will be in for a football packed summer. We are looking forward to broadcasting live domestic football again and bringing some new innovations to our customers to give them the best viewing experience possible.”

BT’s price cut comes as Sky has also announced some innovative new features to help boost the experience for customers.

The update, which will launch in time for the start of the season include something called Sky Sports Crowds.

Sky says it has teamed with with EA SPORTS FIFA to created bespoke and team-specific crowd noise and chants to replicate the vibrant atmosphere of Premier League clashes, so fans don’t miss out on the audio that goes with the action.

There’s also Sky Sports Recap which helps to make sure fans don’t miss any action and Sky Sports Fanzone where fans will be able to watch select matches with friends in a video room and interact while the action unfolds.