It's hard to imagine in the post App Store era, but the Nintendo DS was once a revolution in bringing portable video games to a non-gaming audience. Arriving years before the iPhone, it remains the second best selling games platform of all time, and one of its biggest successes was Brain Training.

Inspired by the work of neuroscientist Ryuta Kawashima (whose floating, polygonal head also guides players in the game), Brain Training sold more than 20 million units and it wasn't unusual to see people getting their daily "brain age" check done on the train well into the 2010s; holding the DS like a book and poking at the touchscreen with a stylus.

But times have changed. And although the Nintendo Switch has been very successful, could players be convinced to buy it and a new Brain Training when there are so many puzzle apps for free on phones?

Dr Kawashima’s Brain Training for Nintendo Switch is extremely similar to the original, with a mix of new and returning activities designed to keep your mind sprightly. (Sudoku is still there, which was a major draw of the original game.) You unlock new activities, challenges and games as you go, and you're asked to log in every day to complete a test that scores you with an "age". The slower and less precise you are, the older your score, with the idea being that the "par" score is your actual age. As a 32-year-old man, I was dispirited to be given an 88 in my first test.

I'd almost forgotten that most of these these games come with a very specific brain-stretching sensation (at least they do for me), and it's exactly the same on Switch as on DS. I understand what I need to do, and I can appreciate that the tasks are quite simple, but they're built in a way that defies my ability to go as fast as I think I can. This is exarcebated by the fact that most activities have you repeating a task over and over, but switch things up just enough to keep you from settling into a comfortable rhythm.

For example you might be asked to select the greatest number in a group, even though other lesser numbers are grabbing your monkey brain's attention by being presented in larger font or moving around. Or you might need to remember an image you were shown previously, even though it's no longer on the screen and has been replaced by something totally different. 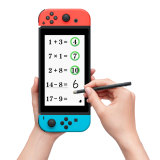 Many of the most basic activities, like doing sums as fast as you can, are identical here compared to the original game.

Since there's no microphone on the Switch, the devious tests that had you calling out the colours of the text on screen — even though that text was spelling out the names of different colours — are gone and have been replaced by something just as basic and confounding. Using the IR camera on the right Joy-Con to keep track of your hand gestures, the game asks you to win or lose rounds of 'rock paper scissors' as fast as you can, or copy the list of finger configurations shown on screen. It's harder than it sounds.

Another good use of the Joy-Con is a fun but limited multiplayer mode, where players each use a controller like a clicker to count objects and see who gets a correct answer first. The only issue with this mode (and the IR games) is that owners of the portable-only Switch Lite will not be able to play them without buying expensive additional hardware. Since Brain Training is such a perfect fit for the little touch-focused machine, that's a bit disappointing.

So does any of this actually make you smarter? Nintendo has been careful not to claim that it does, though the game uses published research to argue that practicing skills such as reading aloud or quickly calculating simple maths doesn't just make you more efficient at those tasks, but can raise your cognitive abilities in general.

I'm inclined to believe that, but I'm less convinced about the "brain age" mechanism for scoring. No matter how many times I've practiced it I've never done well at the tasks requiring to you retain in your memory, for example, the positions of 25 numerals on a grid, even as I've become quite good at the speed and self control challenges. I assume it's rare to find someone who's really good at all three, but that's what you need to make for a nice low score on the tests.

The other thing that might slip you up is that it's a lot easier in this version to accidentally touch the screen, confusing and slowing down the game. Brain Training also still sucks at recognising the numeral 5, so you'll need to learn a specific way of drawing it. The version of the game found in brick and mortar stores comes with an official Switch stylus, which is vital given how tough it is to draw numbers and letters accurately with pudgy human fingers.

Overall this is a higher quality product than you'd find in most apps, but I have to wonder how wide the appeal will be this time given how easily accessed similar experiences are on phones. Unique touches like the IR games and two-player competitions give this Brain Training a fresh edge, despite how similar it is to the 2006 original. But in 2020 there's nothing here — aside from those two aspects — that couldn't be done on smartphones, and that's probably where Nintendo should have put it.

Dr Kawashima’s Brain Training for Nintendo Switch is out now.