It also prompted many on social media to wonder who Neil Young was, so it’s unlikely we’ll see a large-scale exodus of Spotify users anytime soon. 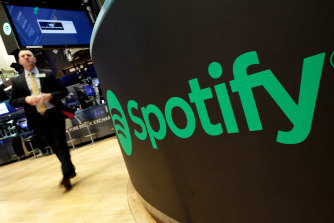 Spotify is increasingly funding its own content with its push into podcasts.Credit:AP

The concerns revolve around The Joe Rogan Experience, a podcast Spotify reportedly paid many millions of dollars to host on its service exclusively, and the opinion of a coalition of scientists that the show propagated “wrong and societally harmful assertions”.

In the time since Young’s announcement we’ve seen other artists follow suit, some accuse Young of censorship, Rogan promise to do better and Spotify claim it would show a disclaimer to users about COVID-19 facts. The whole saga may have had you considering whether Spotify is the right place for your streaming dollars.

If you’re hoping to find a streaming platform that lets you listen to any music track in human history for $15 a month, and which does not have a problematic financial incentive to prioritise its money-making over public health concerns, you may be out of luck. But there are alternatives to Spotify, all of which promise access to a library of around 70 million songs. Here are the major music streaming services and what they offer.

For the sake of setting a baseline, let’s look at what you already get with Spotify.

Its free membership is impressively full-featured, though you can only listen to mixes and not specific songs, are limited in the number of songs you can skip and hear ads every 15 minutes or so.

Full access costs $12 per month for one person, $16 per month for a couple under one roof, and $19 for a family of up to six. The family account includes a separate Spotify Kids app.

The service now prominently includes podcasts, although you may encounter ads whether you’re a paying subscriber or not.

There’s a reason Spotify is considered by many to be the best music streaming platform around. Its Discover Weekly playlist is a great source for new music, it’s available on essentially every device and platform, and it has the cleanest and easiest to use interface of the bunch. 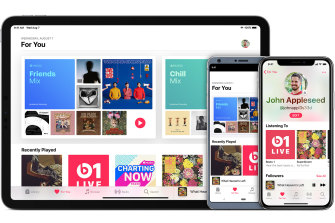 Apple Music is a logical choice if you and your family use a lot of Apple devices.

Apple wasted no time in crowing about its status as “the home of Neil Young” following the Spotify controversy, but of course the service has a lot more going for it than that.

There is no ad-supported free version, but a low-cost “voice plan” for $6 per month gives you full access to the library with the caveat that you need to use Siri to ask for music every time.

A $12 plan for one person gives you access on non-Apple devices and adds lossless and spatial audio for supported tracks, while a family plan is $18 per month. If you already subscribe to other Apple services such as Arcade, News or TV, you can likely save money on Music by bundling it with an Apple One plan.

In addition to the kinds of playlists and mixes offered by other services, Apple also has its own live radio stations and human-curated mixes. And if you have a library on iTunes, you can access it through the Apple Music app.

For people or households with a lot of Apple devices, Apple Music is an obvious contender. It’s also one of the least expensive ways to get high-resolution music streams, although you’re limited to certain Apple devices to access them.

Google rubbed a lot of customers up the wrong way when it retired Play Music and forced everyone over to YouTube. But after a few years of refinement the service is an interesting alternative worth exploring.

The free version gives you full access to the library and even lets you listen to any specific song, but ads often play ahead of tracks or during albums. The other downside is that, if you’re listening through the app on your phone, you need to leave the screen on to keep the music going. Switching to a different app or turning off the screen will kill the music for free users.

Full access costs $12 per month for one person or $18 for a family of up to six. This is the same subscription as YouTube Premium, meaning that ads will disappear in both YouTube and YouTube Music, and background listening is unlocked in both.

As with Apple Music, Google also lets you access your own library of tracks. Using a PC you can send up to 100,000 of your own files to YouTube, which can be played ad-free and in the background through the app even by free subscribers. However, only paying subscribers can play uploaded files through smart speakers.

YouTube Music is a downgrade from Spotify in terms of ease-of-use, and its bottomless algorithm-powered playlists won’t suit everyone. But it is good value if you happen to use any other Google services, such as YouTube or Nest smart speakers. 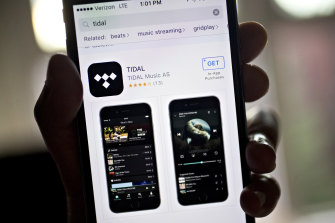 Tidal claims to put a focus on streaming quality and fairer artist payments.

Now partly owned by Jack Dorsey’s Block, Tidal began as a service focused on urban music and fair compensation for artists, but these days it is best known for its high-quality streams that surpass much of the competition for bitrate.

It doesn’t offer a free version in Australia, though the option (which is currently US-only and includes lower-quality streams and ads) will supposedly expand to our shores at some point.

The standard HiFi plan is $12 per month for one person, or $18 for a family, offering streams up to CD quality (1411 kilobits-per-second). An additional Hi-Fi Plus tier is a steep $24 per month for one person, which unlocks tracks in master quality audio (up to 9216 Kbps), Dolby Atmos and Sony 360 Reality Audio. The catch is that many master quality tracks require a special decoder only found on certain speakers and receivers.

Notably, Tidal claims to offer higher artist payouts than any other major streamer and is introducing new ways to calculate royalties. Currently, 10 per cent of each Hi-Fi Plus member’s subscription fee goes directly to their most-listened artist every month, and a new “Fan-Centered Royalties” program will further skew payouts towards the favourite artists of individual subscribers.

Tidal makes most sense if you’re willing to invest in fancy streaming equipment and make frequent use of it, but its standard plan is also a decent Spotify alternative for listening on your phone.

Finally, as a tech giant, Amazon is also obliged to run a music streaming service.

Amazon’s tiers are a little confusing. A free membership gets you “top playlists” only, while Amazon Prime members also get access to a limited library of 2 million songs.

The paid version that comes with a full library is called Amazon Music Unlimited, and costs $5 per month for a single device (i.e. one Echo speaker), $12 for an individual user on all devices, or $18 for a family. It doesn’t matter whether you also have a Prime membership or not.

All Unlimited plans except the cheap single-device one include high-resolution streams (which Neil Young loves, by the way) and spatial audio mixes. Like Spotify, it’s also beginning to integrate podcasts and will even host its own exclusives.

Of all the services Amazon is probably supported by the least number of devices, but if you mainly listen on your phone or an Amazon Echo speaker you probably won’t notice.