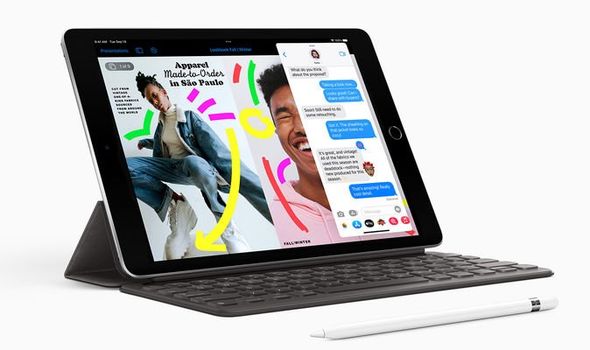 Apple has refreshed its entry-level iPad with a bigger screen. The announcement was made as part of the annual September launch event, where the company also unveiled the next iPhone model. Entitled “California Streaming”, Apple used the keynote presentation to reveal that it had boosted the screen size on the £329 iPad to 10.5-inches. Although the price remains the same as the previous model, Apple has doubled the amount of storage found in the base model, which is a nice bonus.

To increase the screen size from the 10.2-inch display found on the previous model without increasing the physical footprint of the tablet, Apple trimmed the borders around the screen. However, that doesn’t mean you should expect to see the same all-screen design found on the likes of the latest iPad Air and iPad Pro models.

Instead, the bezels around the screen are a little thinner. The £329 iPad still sports borders that are chunky enough to house a Home Button, complete with Touch ID fingerprint scanner to unlock the device and authenticate online payments via Apple Pay.

Apple has used the same hardware design twice before, starting with the second-generation iPad Pro back in June 2017. When the iPad Pro transitioned to an all-screen design with Face ID facial recognition, the 10.5-inch form-factor was used for the third-generation iPad Air. Now that the latter has also been upgraded to an all-screen design with an 11-inch screen, Apple is dusting off the 10.5-inch case design once again for its most affordable tablet.

Inside, the new iPad is powered by A13 Bionic – replacing the A12 found inside its predecessor. Apple says to expect performance to be around 20 percent faster, and says the iPad should be faster than most Chromebooks, which have become a favourite in education. The A13 Bionic has an improved Image Signal Processor, or ISP, which will boost photos from the rear-facing camera.

A new 12MP front-facing camera has been fitted to the iPad. Apple is bringing Centre Stage, a feature that was debuted with the all-new iPad Pro last year, to the iPad. This uses AI to automatically focus on the subject of the video call, so the camera will appear to follow you as you move around …or younger callers race around the room.

As you’d expect, the latest iPad arrives with the latest version of iPadOS out of the box. iPadOS 15 brings a number of useful new features, including the ability to place rich widgets anywhere on the homescreen to break up the grid of apps.