Between more machines powered by M1 chips, a new push into premium podcasts and a Tile competitor, Apple’s product unveiling this morning was emblematic of how many new markets the tech giant has pushed into just over the last year.

With the M1 — a system-on-a-chip designed by Apple — now in laptops, tablets and desktop computers of various size, Apple has almost completely divorced itself from Intel and set a path forward where all its machines can be as close knit as the iPhone and iPad have been. 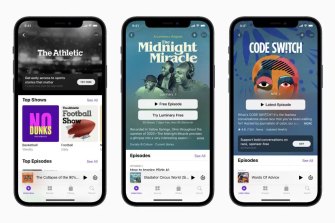 Apple’s podcast subscription services come alongside a visual overhaul for its Podcast app.

But it’s in software and services where Apple’s moves are arguably causing more disruption, as the company seems to have systematically taken note of categories or apps flourishing most on its smartphone ecosystem and decided to leverage its ownership of the same to compete.

Since Apple Music was launched in 2015, the iPhone-maker has created its own services for curated news, TV and movies, video games and fitness regimes, prompting rebukes from competitors like Spotify and Microsoft which say Apple enjoys advantages it doesn’t extend to others on its platforms. Similar accusations are no doubt on the way regarding Apple’s latest products. 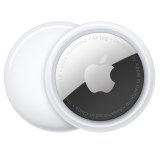 Tile, the company that makes wireless tags you can track with your phone, already filed a complaint against Apple a year ago. It claimed changes to the way iPhone’s Bluetooth connectivity worked made it harder for people to use its products but did not affect Apple’s own Find My ecoystem.

Recently Apple opened up Find My to other developers so anything from earbuds to scooters could be located on Apple devices — provided the developers are certified by Apple — and this morning’s introduction of AirTags represents a direct alternative to Tile. Because Apple is now making the chips and the software of its device, it’s easy to see how a Bluetooth tracker it also makes or certifies is likely to work much more seamlessly on those devices.

Meanwhile on the podcast front, Apple has introduced a way for creators to offer bonus, early or ad-free episodes for subscribers willing to pay, intercepting Spotify as it initiates plans to roll out a similar premium model.

The new program requires podcasters to pay Apple $30 per year in order to offer premium content, and the tech giant also takes 30 per cent of each subscriber’s money. If the subscriber keeps their membership for a year and continues on an auto-renewing subscription, the fee drops to 15 per cent. This means podcasters can earn more money if they can convince fans to keep paying for more than a year.

Currently many podcasters looking to charge subscribers and provide bonus content use membership platforms like Patreon, which takes between 5 and 12 per cent.

Peter Wells, a journalist who covers podcasts in columns and in his own podcast Meta, said the main benefit of the Apple model is a lack of friction. Patreon involves an entire separate service to sign up to, and asking fans to add a special podcast feed to their app of choice using a code they get through Patreon. Meanwhile if they’re already using Apple podcasts, subscriptions and exclusive content can be right there in the same app.

“Apple’s dominance in podcasting is definitely being challenged by Spotify in markets around the world, but here in Australia most podcasters still see around 80 per cent of their total downloads coming through Apple’s Podcast app,” Mr Wells said.

“It will be interesting to see how many podcasters choose Apple to sell subscriptions.”

Other than offering exclusive content through a platform like Patreon, many Australian podcasters use production services like Omny or Acast to monetise through methods like ad insertion. Subscriptions in Apple podcasts could give them an option to provide ad-free versions to fans willing to pay.

Spotify also offers ad insertion services, but currently not in Australia. The streaming giant has invested heavily in podcasts over the last few years, inking deals with big and independent players to keep podcasts exclusive to Spotify and away from Apple.