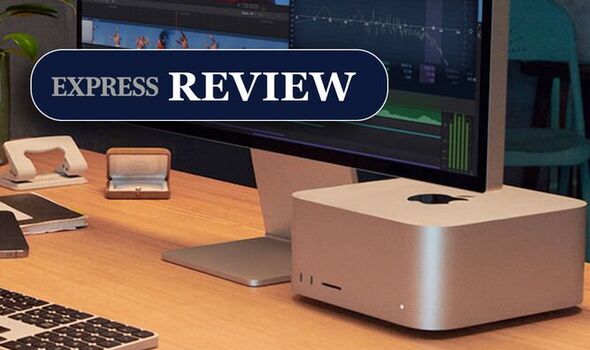 It’s not often we’d start a product review by talking about the box that a new product ships in but, just like the 24-inch iMac, Apple has brought some real theatre to the eco-friendly packaging used for the Mac Studio. Rip the seal and the box will cascade open like origami to reveal the new Mac in all of its glory. Although this unboxing is pretty magical, you might be slightly surprised to see what is actually inside as the Mac Studio ships with just a black power cord …and that’s it.

There’s no wireless keyboard, USB charging cables, or Magic Mouse in sight. Instead, all of these vital accessories will cost you extra. In fact, if you fancy taking delivery of the fancy new Black extended keyboard or stunning Black Magic Mouse you’ll have to stump up even more cash as both of these wireless peripherals now cost £20 more than the plain white versions.

Once you’ve got over that shock, the first thing you’ll notice is how good the new Mac Studio looks. Apple’s design team has done a stellar job, with this computer covered from head to toe in aluminium for a super-premium look. As well as that striking styling, Apple has also made the Studio incredibly practical with plenty of ports on both the back and front of this machine.

On the rear, you’ll find four USB-C Thunderbolt 4 ports, an ethernet connection, HDMI and two USB-A sockets along with a power button and headphone socket. On the front, there’s an SD Card reader and two further USB-C ports which makes it much easier to plug in all your accessories without searching for a socket.

At almost 10cm tall, Mac Studio is quite a bit bigger than the 3.6cm Mac Mini but that’s to be expected considering how powerful this thing is.

Boot it up and you’ll be treated to some serious performance from the new Apple silicon that’s tucked under the bonnet. The Mac Studio ships with either the M1 Max processor – which was announced late last year – or the ultimate M1 Ultra brains, which take things to a whole new level.

For this review, we took delivery of the less expensive M1 Max model which starts from £1,999. The Ultra costs considerably more with prices for that device starting from a hefty £3,999.

Make no mistake, the M1 Max is no slouch. It can also be boosted to 20-Cores and there’s the option to add 64GB of physical memory that delivers up to 400GB/s of memory bandwidth. Whether you’re editing 4K video, editing photos, or dipping your toes into app developments, this powerful chip will likely be more than adequate.

However, the M1 Ultra offers the best performance ever achieved by Apple’s silicon team – and the fastest chip on the planet, it claims – that should cater to professionals who need another step-up in performance from their Mac.

You can find out more details about the M1 Ultra and how it works, here.

Regardless of whether you pick the M1 Max or M1 Ultra, Apple’s custom-designed chipsets continues to impress and there’s no question that Mac Studio will easily keep pace with the daily digital needs of pros.

As well as being supremely powerful, the M1 Max chip is also much more efficient meaning it uses less power. During our time with the Studio, the machine stayed pretty silent and also didn’t appear to get roasting hot no matter what we happened to throw at it.

As we mentioned earlier, the Mac Studio with M1 Max with 512GB of storage starts from £1,999 but be warned, things can increase rapidly as you customise this desktop machine.

Of course, if you don’t own a display, you’ll also need to add that to your shopping basket. Helpfully, Apple has launched the perfect partner for its new Mac Studio, the Studio Display. This 5K screen packs a real punch and also features impressive speakers so content looks as good as it sounds – you can read our full Studio Display review here.

So, that’s everything good about the Mac Studio but are there any niggles? We do have a few small gripes including the power button and headphone port being tucked on the back of the machine. With the SD card reader and USB-C ports easily accessible on the front, it’s a shame you still have to blindly fumble behind the machine to turn it on and plug-in your headphones.

As we mentioned earlier, the power cable is also black and really doesn’t look great when dangling behind your desk. Everything about the Mac Studio is so slickly designed, including that packaging, so this ugly cable sticks out like a sore thumb.

One final thing to remember is that, like all new Macs with Apple silicon tucked inside, the Mac Studio cannot be upgraded after you’ve bought it. That means you’ll need to make sure you spec it up for your needs before tapping the buy button. Unfortunately, that might mean you need to wait a few more months to place your order, rather than upgrading down the line, like you can with the Mac Pro.

Apple’s Mac team is on a roll right now and the Studio is another brilliant new product launch from the technology giant. This all-new desktop machine looks great, has all the ports you could ever wish for, and is supremely powerful.

With a starting price of £1,999, it’s also pretty affordable especially as that base model should offers more than enough oomph for the average user, even if you’re working with 4K Ultra HD video, multiple 4K displays, audio editing, app developments, and more.

Yes, there are a few niggles such as the lack of keyboard in the box, unsightly black power cable, and lack of upgrade options after you’ve purchased it. However, if you’re looking for a new desktop Mac to power you through the day, it’s really hard not to recommend the Studio.

The Mac is well and truly back!