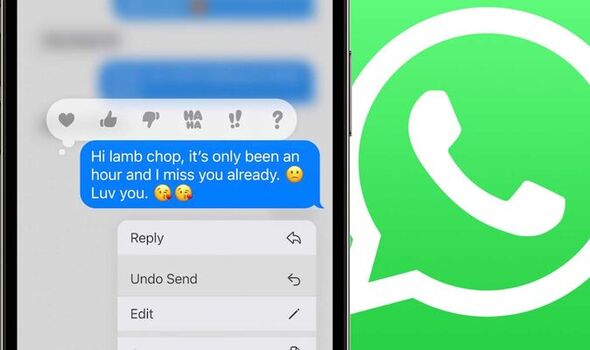 Apple has today revealed what iPhone users can expect from its big iOS 16 update, which will be launching later this year. The huge iPhone upgrade will bring with it plenty of brilliant features, including a huge shake-up to the Lock Screen which offers a wide range of customisation options. But for anyone that has ever sent a text message they regret, the most exciting feature could be found on iMessage.

This feature, which will help you avoid an embarrassing gaffe if you act quickly, is even more exciting for iMessage users as you won’t find similar tools on other apps.

For instance, WhatsApp currently doesn’t allow you the ability to edit any chats you send.

It’s believed the team working on the Meta-owned app are building a feature to edit messages, but it’s unclear when this will rollout.

WhatsApp does offer something similar to the upcoming undo send tool in iMessage, but it’s not quite the same.

For years now WhatsApp has allowed users to delete messages they send, however – when this happens the chat history will show a ‘this message was deleted’ label, which can lead to more questions than answers.

The iMessage undo send feature will be much more stealthy, with the recipient not having any record a chat was removed.

Besides these features, the upcoming update to iMessage in iOS 16 will also let you flag messages you’d already read as unread.

Apple hasn’t announced the exact release date for iOS 16 yet, but it will be available in time for the launch of the iPhone 14 range.

Historically, new iPhones and new generations of iOS are available each year in September.

For anyone that is thinking of picking up a new iPhone this year, there are plenty of reasons to be excited about the iPhone 14 range.

It’s believed Apple could be dropping the iconic notch which debuted with the iPhone X with the Pro and Pro Max versions of the iPhone 14.

Instead, it’s rumoured a new pill-shaped Face ID selfie camera will be introduced which will free up much more screen space.

It is also rumoured that the iPhone 14 Pro and Pro Max will support always-on-display tech.

Always-on-displays, which show information while a phone is asleep, have long been enjoyed by Android users.

This feature was a big selling point of the Samsung Galaxy S7 and has been available on a wide range of handsets since then, from flagship devices to budget phones.