The French consumer watchdog has fined Apple €25 million euro ($41 million) for its lack of transparency in deliberately slowing down older devices. The iPhone-maker has previously admitted to the practice, and apologised for not informing customers.

Evidence first emerged in 2017 that Apple had used a software update to limit the performance of older iPhones, feeding into a long-held conspiracy theory that the company intentionally slowed devices as they aged to encourage consumers to upgrade. 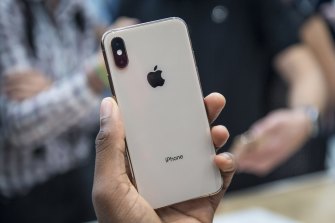 Apple continues to slow iPhones as their batteries decline with age.Credit:Bloomberg

In December 2017 the company came clean and clarified that it had slowed the devices primarily to protect them. As the phones' batteries age, there's a risk that higher levels of performance will drain the battery or force the phone to restart unexpectedly, Apple said. By making phones with older batteries slower, the devices became more stable and would theoretically keep working for longer than if performance throttling was not applied.

"The DGCCRF has indeed shown that iPhone owners had not been informed that the updates of the iOS operating system (10.2.1 and 11.2) they installed were likely to slow down the operation of their device," it said in a statement, adding that Apple had "committed the crime of deceptive commercial practice by omission".

Following the original controversy, Apple slashed the price of a battery replacement service for out-of-warranty old iPhones in Australia from $119 to $39. These days it costs $79.

Apple continues to apply performance throttling to iPhones as the batteries age, with 2018's iPhone XS, XS Max and XR being the latest to have the setting applied. Performance is only affected if Apple's software detects a concerning pattern of heat, battery discharge or impedance.

As of iOS 11.3, there's also a section in Settings that displays the health of the battery and whether performance has been slowed due to age, and allows users to turn throttling off if they choose.