Apple has introduced new gadgets, including a lower-priced Apple Watch and more powerful entry-level iPad, at a virtual event overnight.

While the company avoided talking about any new iPhones, its focus on fitness, productivity and affordability was timely considering much of the world is still locked down to some extent owing to the ongoing pandemic, and Apple also furthered its push for services with new subscriptions and bundles.

In addition to a new Apple Watch Series 6, which features a blood oxygen sensor and starts at $599, Apple introduced the Apple Watch SE at $429.

The main differences are that the less expensive watch utilises last year's processor, does not have an always-on display and is only available in an aluminum case. It is the same size as the Series 6, and maintains many features including heart rate notifications and fall detection. 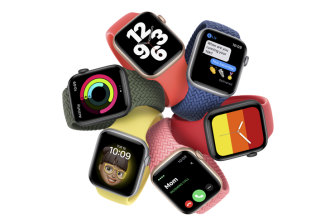 The Apple Watch SE comes in at a significantly lower price than the high-end model.

Notably, for people buying a cellular Apple Watch that has its own mobile connection, the Watch SE comes in at a full $250 less than the Series 6 at $499.

The scaled-down Apple Watch follows on the heels of a budget iPhone the company released five months ago as the economy cratered and unemployment rates rose.

The Apple Watch has never come close to rivalling the iPhone's popularity, but it does dominate the market for smartwatches. Canaccord Genuity analyst T. Michael Walkley estimates about 51 million Apple Watches will be sold this year, a 5 per cent increase from last year. The research firm GlobalData pegs Apple's share of the $US64 billion ($87.7 billion) smartwatch market at roughly 60 per cent.

At Wednesday's event Apple also took the wraps off a subscription fitness service tailored to its watches. Called Apple Fitness+, it will roll out in Australia by the end of the year and cost $14.99 per month per family. The service provides personalised workouts and recommendations, and makes data visualisations available on iPhones, iPads and Apple TVs.

In tablets, Apple unveiled a significantly more powerful and less expensive version of its entry-level iPad, which starts at $499 and borrows the A12 Bionic chip from 2018's iPhone XS. There was also a new iPad Air with a brand new chip — the A14 Bionic — and a new design that eliminates the Home button and moves Touch ID to the power button on top. It starts at $899.

The company normally also rolls out its new iPhones at this time of year, but production problems caused by the pandemic have delayed their release until at least October. CEO Tim Cook didn’t mention iPhones during the one-hour presentation recorded at the company's massive, but now mostly empty, headquarters in California. 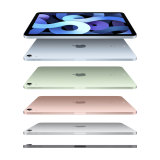 The new iPad Air comes in a range of colours.

Finally the company introduced a new program called Apple One, which is a tiered subscription service bundling several existing services and upgraded iCloud storage for a single price. Plans start at $19.95 per month for an individual, or $25.95 for a family, and include Apple Music, Apple TV+ and Apple Arcade. A "premium" family subscription also includes Apple News+ and Apple Fitness+, for $39.95 per month.

Tens of millions of people already subscribe to Apple's various services, helping the company double its revenue during the past four years within a division that creates products for the more than 1 billion iPhones, iPads, watches and other devices that the people already use.

The services division also includes Apple's App Store, which is under regulatory scrutiny for charging a commission of up to 30 per cent for products sold through other companies who have no other option but to use the store to reach the mostly affluent consumers who buy iPhone products.