WASHINGTON — Capitol Hill politicians have groused for years about the power and influence of the country’s largest tech companies. But they took little action to match their rhetoric.

That started to change on Wednesday, when House lawmakers took their first votes on a suite of bills that are meant to weaken the dominance of Big Tech. The bills, six in all, would bulk up antitrust agencies, make it harder to acquire potential rivals, and prevent platforms from selling or promoting their own products to disadvantage competitors.

The votes by members of the Judiciary Committee to advance some of the bills showed the growing bipartisan agreement for taking on the tech companies. A handful of Republicans joined the widespread support among Democrats for the bills.

But the outcome of the votes, and the debates before they took place, also exposed the fault lines among Republicans and Democrats — and underscored why final passage of all the bills is expected to be difficult.

Democrats, who have had the most say over the bills, are focused on the market power of Amazon, Apple, Facebook and Google. Representative Jerrold Nadler of New York, the Democratic chairman of the committee, said the votes “pave the way for a stronger economy and a stronger democracy for the American people by reining in anti-competitive abuses of the most dominant firms online.”

Some Republicans have united with them, arguing that the proposals would help address one of their main concerns: the power that social media companies have over speech, and what they argue is political bias and censorship of conservative voices. But many other Republicans say that the bills only add more government intervention into the economy while not directly addressing their concerns about free speech.

That debate within the Republican Party spilled out on Wednesday as soon as the first bill was brought up for a vote. The proposal, considered among the least contentious of the six, would increase the costs of fees associated with some mergers, to help raise more funding for the Federal Trade Commission, which helps regulate deals.

During a three-hour debate about the bill, Representative Jim Jordan of Ohio, the top Republican on the committee, said the bill was a power grab for the Democratic-led antitrust agencies, making them bigger and more influential. He also said the proposals and the other antitrust bills failed to address the ability of Facebook and other social media companies to cut off political voices.

Representative Ken Buck of Colorado, a fellow Republican and a co-sponsor of the bills, agreed that the tech companies silence conservatives. But he implored his party for unity to take on the power of Big Tech through the proposals, which he said would limit the overall power of the companies. 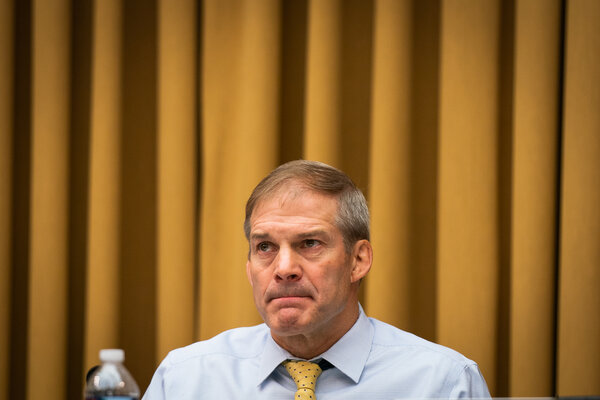 While progressive lawmakers largely back the bills, the proposals have frustrated Democratic lawmakers from California, who say they go too far in regulating their state’s most prominent companies.

Representative Lou Correa, a Democrat from Southern California, said that the number of people in the state working for the big tech companies had grown substantially, helping the state fund services like public education and support for people affected by Covid.

“We want to make sure that we don’t kill the goose that lays the golden eggs,” he added later.

Mr. Correa also said: “These firms — high tech — are the reason California has a budget surplus, as opposed to a deficit, enabling the state of California to invest in public education, to help those affected by Covid, the middle class, those who are trying to get to the middle class.”

Ms. Lofgren worried during the hearing that the bills could ensnare companies that do not share the tech giants’ immense scale. Mr. Swalwell said before the hearing even began that he would oppose several of the bills.

“In my district alone, I represent thousands — likely in the five digits — of employees affected by the proposed laws,” he said. “It is these people whose jobs, families and livelihoods I was elected to protect — and must advocate for today.”

The committee’s passage of the bills kicks off a much harder process. Eight Democratic lawmakers have asked Speaker Nancy Pelosi, who has tremendous sway over when bills are taken up in the full House, to slow the process. The lawmakers repeated arguments made by companies like Apple that say the bills could open up security and privacy vulnerabilities for customers.

The challenge is even stiffer in the Senate, where the bills will each require significant Republican support to reach the needed 60 votes. A few Republicans, including Josh Hawley of Missouri, have pressed for stiffer antitrust laws. But it is unclear whether many more will join him.

Some bills, like the one to generate more money for the Federal Trade Commission, could face less resistance than others. The most contentious is a bill that bans platforms from selling their own products, such as Amazon selling its own branded Amazon Basics toilet paper and putting rivals like Charmin at a disadvantage.

“We think it’s an uphill climb for the toughest bills,” said Paul Gallant, a research analyst at Cowen and Company. “The Senate filibuster is always the highest hurdle and I suspect it will hold back the toughest of these bills. But the House is going faster and farther against tech than anyone expected.”

The bills face fierce opposition from technology companies that have marshaled their considerable lobbying operations. Ahead of the votes on Wednesday, Apple sent a letter to committee leaders warning that the if the bills were passed, the company would not be able to offer certain privacy and security features for users. Think tanks and lobbying groups funded by tech companies issued critical statements before the votes.

The bills “single out a handful of America’s most innovative and globally competitive tech companies for divestiture and draconian regulation,” said Alec Stapp, a director of the Progressive Policy Institute, a nonprofit think tank that received sponsorship from tech companies.

“Consumers want the government to scrutinize and regulate the tech industry, but don’t want Congress redesigning the apps and services that make their lives easier,” said its chief executive, Adam Kovacevich.

Alex Harman, a competition policy advocate at Public Citizen, which had been pushing for the bills, said Wednesday’s votes represented an important moment. Almost a decade ago, he said, there had been little Capitol Hill support for an investigation of Google’s practices by the Federal Trade Commission, which ultimately decided not to pursue a case against the company.

“Nine years later, we are in a world where a serious bipartisan effort in a committee is not just trying to push on an investigation, they’re trying to break them up,” he said. “That is a big deal.”