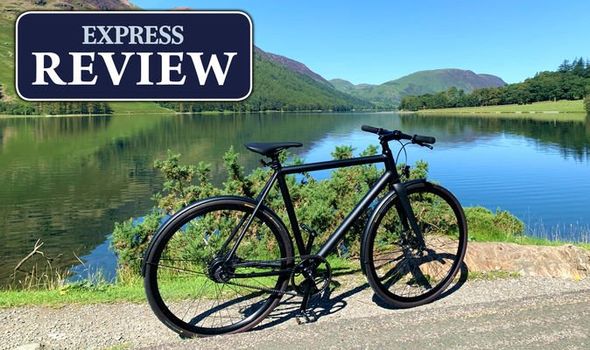 Ampler Curt does the impossible – it makes your journey to work one of the most enjoyable parts of your day. Come to think of it, the Curt makes travelling anywhere phenomenally fun. And because flying around on this battery-boosted beauty is so enjoyable, you’ll be itching to fire-up the Curt and head out as often as possible – making it a great option for commuters and those who just want to spend more time exercising on a bike.

Express.co.uk has spent the last month or so recharging and riding the Ampler Curt. Looking to avoid public transport and take advantage of the expanded cycle lanes? Here is our in-depth review of this battery-powered bike. 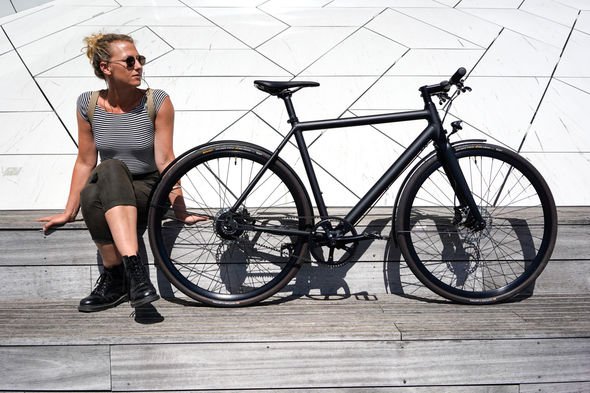 The Curt is one of three electric bikes available from Berlin-based firm Ampler, which kickstarted its journey on, ahem, Kickstarter. All three bikes are incredibly stylish with the battery packs and cables neatly tucked away inside the down tube. Honestly, from a distance, you cannot tell any of these bikes need to be plugged in at night. But while all three bikes in the Ampler line-up are propelled with the same 250W motor system in the rear hub, the Curt is the one with the sportiest design. And more importantly, it’s also the lightest.

Tipping the scales at 13.5kg (29.8lb), the Curt is seriously lightweight – not just for an electric bike, but for any bike.

Picking up the Ampler Curt, it’s almost inconceivable there is enough battery power hidden inside the frame for a 44-mile (70km) round trip on a single charge. For comparison, Brompton’s electric bike, which is designed to be folded-up and carried between trains on your commute, weighs-in at 16.6kg.

Ampler has managed to achieve this featherweight feat by opting for a carbon fibre forks and rims as well as some cutting-edge battery technology. All of that means carrying the Curt up the stairs isn’t too much of a hardship, which is a good thing as you might find yourself tackling the stairs with the Curt under-arm more often than you think. That’s because the charging cable needs to be plugged directly into the frame – unlike some ebikes, the battery can’t be removed and charged separately.

While that won’t bother anyone with a garage… those living in a fifth-floor apartment will be glad of the bike’s extreme dieting. The battery life is good enough that you shouldn’t have to hunt around for a plug near the bike storage at work (or squeeze the Curt in the lift to get it to the plug at your desk) but it’s worth checking the mileage to be sure. 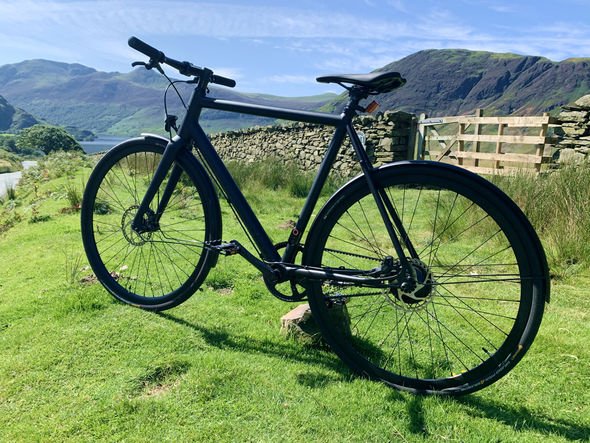 Curt is also the only bike from Ampler which is available in a single-speed configuration, which is the model we tested.

Single-speed makes the Curt an ideal choice for commuting. While setting off on your journey to work with only a single gear at your disposal sounds a little daunting, after riding the Ampler Curt for a few weeks, we wouldn’t want it any other way.

Opting for the single-speed model ditches the hassle of a greasy chain in favour of an almost maintenance-free carbon fibre belt drive. That means you’ll never have to worry about your suit trousers getting snagged or smeared with grease from the chain during your bike ride to the office.

The single-gear configuration also leaves the Ampler Curt looking much cleaner. The handlebars are completely clutter-free and there’s no rattle from a bouncing chain as you thud over a pot-hole. In our experience, riding without ever having to think about the best gear is a revelation.

Of course, riding with a single gear could pose a problem if it wasn’t for the phenomenal motor buried inside the Ampler Curt. Like all electric bikes on-sale in the UK, the Ampler Curt is limited to 15.5mph (25kph) by law, but while you’re unlikely to set any land-speed records with the Curt – you absolutely will be able to power up hills and arrive at your destination sweat-free. 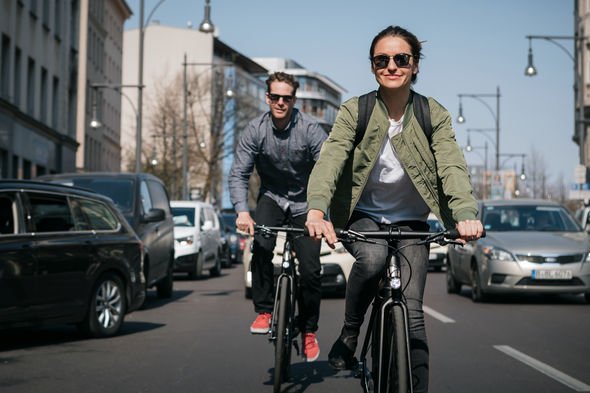 If you’re not used to riding electric bikes, don’t expect the motor to speed off at 15.5mph with the touch of a pedal and then build on that speed until you top-out at an eye-watering 35mph. In fact, in most cases, furiously pedalling to hit over 15.5mph feels like you’re fighting against the bike.

Instead, the motor is designed to iron-out any hills in your path, so you’ll always be able to keep turning the pedals at the same pace – regardless of whether you’re cruising through town, weaving around a traffic jam, or forging up a monstrous hill.

In other words, you won’t often top 15.5mph on the speedometer, but you’ll be able to maintain 15.5mph over almost all terrain. And as any self-respecting, lycra-wearing cyclist will tell you, 15.5mph is a damn good average. Especially as you won’t have to collapse into the office in a sweaty heap to achieve that speed on your commute.

Ampler Curt uses a torque-sensing motor control, which judges the amount of grunt you’re applying to the pedals to judge what sort of output the motor needs to produce. Whenever it senses that you’re beginning to struggle – on a hill, for example – a smooth hum will announce that motorised help is on the way.

The Ampler Curt is comfortably the smartest electric bike we’ve ever used. Every decision by the torque-sensing controls feels right – it lets you tear away from a standstill at a junction (handy if you’re trying to get ahead of oncoming traffic) but pulls back enough that you never feel out of control. Importantly, riding the Curt still feels like you’re putting in some effort and not just along for the ride. In fact, if you want to push yourself, it’s still possible to burn some calories and work-up a sweat on this electric bike.

To do just that – and put the single-speed Ampler Curt through its paces – we pushed the definition of “commute” to the limit with a 1,161ft ascent in the Lake District, clocking up a 25% gradient on some corners. With only a single gear and a fully-charged battery, we still managed to soar through the ride (and leave our pedal-powered friends in the dust) with the Curt.

Ampler includes a built-in Busch+Müller bike light on the front and a strip of red LEDS on the seat post of the Curt. Dropping the saddle to its minimum height covers some of the lights, so if you’re planning to share the Curt with a partner or family member you’ll want to buy the smaller frame option.

Since all of the lights are powered by the same 48V LG Lithium-ion battery pack that fuels the motor, there’s no need to worry about packing any AAAs for your journey. Although, of course, you will need to remember to charge your bike. Thankfully, you won’t have to charge the Curt all that often. 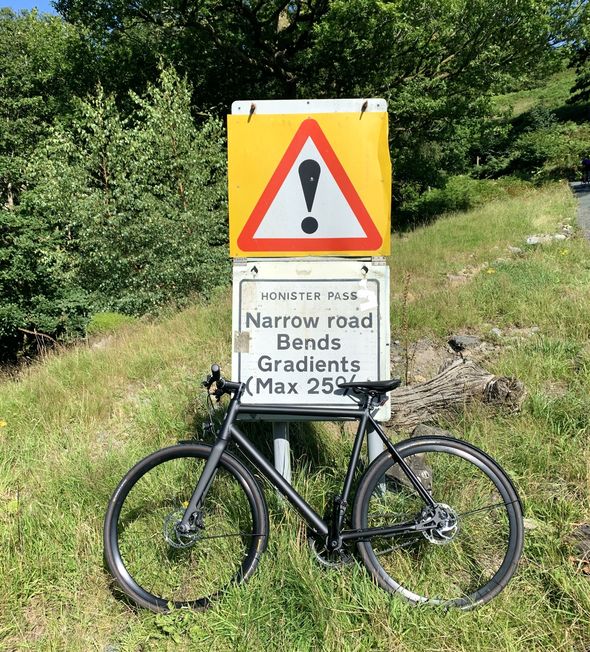 After flying through town on the Curt, you’ll never want to get onto a bus, tube or train to work again

When you do eventually run down the battery, recharging is handled with a laptop-like magnetic disc that snaps to the port at the bottom of the seat tube. It’s a neat system and means tripping over the cable won’t result in a toppled bike. Ampler tells us the charging port is weather-proof, which is a good thing as it does get a little gummed-up with debris from puddles and muddier paths. Refilling the Ampler Curt to 100% takes two-and-a-half hours, so you’ll want to charge it the night before work – not in the morning.

Checking the remaining charge, toggling the lights on and off and switching the motor between its two speed settings is all handled with the Ampler app. Available on iPhone and Android, the Ampler app includes built-in maps and lets you record stats from your journey, including top speed, distance and duration.

Crucially, these statistics are gathered from the sensors in your phone – not inside the bike – so if you leave your handset at home before you set off, you’re not going to be able to find out your average speed, total ascent, or any other stats.

Ampler Curt is available from the Berlin-based company’s online store right now. It costs £2,790 regardless of whether you want the single-speed configuration or the 10-speed. Both ship with the built-in lights, mudguards and puncture resistant tyres.

You can pay extra for insurance or an extra charger, but that’s not really necessary given the generous range on the battery.

Ampler also sells discounted models in its online outlet store, so it’s well worth checking whether there’s any stock available before you add a Curt to your shopping basket. 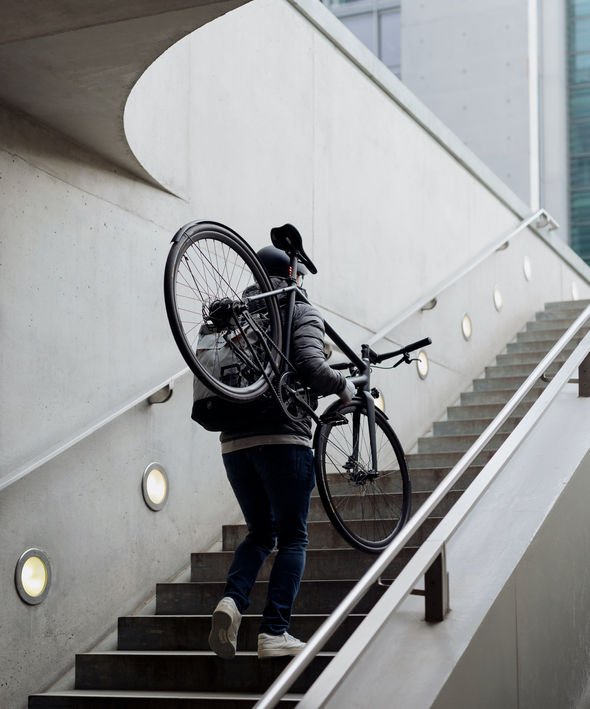 Everything about the stunning Ampler Curt is designed around simplicity. The battery and electrics are carefully disguised beneath the svelte frame. There are no distracting battery indicator lights cluttering up the handlebars. There isn’t even a switch to change the motor settings.

In fact, the only indication this is anything more than a sleek road bike is the small on-off button. That’s it.

The mudguards are incorporated seamlessly into the laser-precise lines of that stunning carbon fibre frame design. And everything looks brilliant lavished in the gorgeous matte finish.

If Batman commuted through Gotham on an electric bike – the matte black Ampler Curt is exactly what he’d use. Guaranteed.

Riding the Ampler Curt is an absolute joy. This seriously stylish electric bike is sure to turn some heads whether you’re looking to cycle for pleasure on the weekends, or avoid the need to mask-up and take the train each morning. The mind-reading motor system dishes-out the perfect amount of assistance, whether you’re hoping to speed over hills or get to the office in your suit without breaking into a sweat.

After flying through town on the Curt, you’ll never want to get onto a bus, tube or train to work again. If you can justify the price, this electric bike is highly recommended.