The company’s victory deals a crushing blow to organized labor, which had hoped the time was ripe to start making inroads. 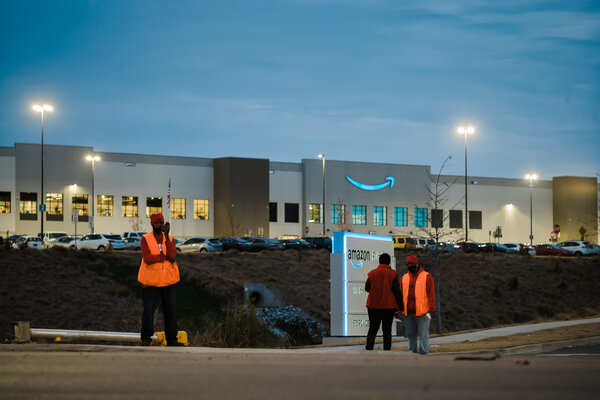 By Karen Weise and Michael Corkery

Amazon appeared to beat back the most significant labor drive in its history on Friday, when an initial tally showed that workers at its giant warehouse in Alabama had voted decisively against forming a union.

Workers cast at least 1,608 votes against a union, giving Amazon enough to defeat the effort, as ballots in favor of a union trailed at 696, according to a preliminary count. Hundreds of votes remained to be tallied, but are not enough to bridge Amazon’s margin of victory. Once the count is complete, the results will still need to be certified by federal officials.

The lopsided outcome at the 6,000-person warehouse in Bessemer, Ala., dealt a crushing blow to labor organizers, Democrats and their allies at a time when conditions have been ripe for unions to make advances.

Amazon, which has repeatedly quashed labor activism, had appeared vulnerable as it faced increasing scrutiny in Washington and around the world for its market power and influence. President Biden signaled support for the union effort, as did Senator Bernie Sanders, the Vermont independent. The pandemic, which drove millions of people to shop online, also spotlighted the plight of essential workers and raised questions about Amazon’s ability to keep those employees safe.

But in an aggressive campaign, the company argued that its workers had access to rewarding jobs without needing to involve a union. The victory leaves Amazon free to handle employees on its own terms, as it has gone on a hiring spree and expanded its work force to more than 1.3 million people.

Margaret O’Mara, a professor at the University of Washington who researches the history of technology companies, said Amazon’s message that it offered good jobs with good wages had prevailed over the criticisms by the union and its supporters. The outcome, she said, “reads as a vindication.”

She added that while it was just one warehouse, the election had garnered so much attention that it had become a “bellwether.” Amazon’s victory was likely to cause organized labor to think that “maybe this isn’t worth trying in other places,” Ms. O’Mara said.

The Retail, Wholesale and Department Store Union, which led the drive, blamed its defeat on what it said were Amazon’s anti-union tactics before and during the voting, which was conducted from early February through the end of last month.

“Our system is broken,” said Stuart Appelbaum, the union’s president. “Amazon took full advantage of that, and we will be calling on the labor board to hold Amazon accountable for its illegal and egregious behavior during the campaign.”

A total of 3,215 ballots, or 55 percent of the 5,805 eligible voters at the warehouse, were cast in the election. A majority of votes, or 1,608, was needed to win. About 500 ballots were contested, largely by Amazon, the union said. Those ballots were not counted.