Not content with chasing the elixir for eternal youth, Silicon Valley is now trying to resurrect the dead.

Last week, Amazon executive Rohit Prasad showed off a demo of the company’s Alexa assistant imitating the voice of a dead grandmother.

After a young boy asked his speaker “Alexa, can Grandma finish reading me The Wizard of Oz?“, the device produced a lifelike synthesis, reading the book in a reassuring elderly tone.

Overworked parents might see the feature as a genius study hack; Amazon pitched it as a way to remember lost ones. “While AI can’t eliminate that pain of loss, it can definitely make the memories last,” Prasad said.

Like most of the tech industry’s inventions, the feature was announced with a breezy optimism. Prasad boasted that the grandmother’s voice could be replicated with less than a minute of audio, an achievement that would have been impossible a few years ago.

The company describes it as exploratory research and it is unclear when, or if, the technology will make it to the public. Nor did Amazon say what restrictions it planned to place on the system. Will relatives have to give their consent for their voice to be replicated before they pass away, for example? Will Amazon demand proof that somebody has died, or will we be able to create imitations of our own voice, outsourcing bedtime reading to digital twins? Will Amazon attempt to impersonate personalities as well as simply voices, letting us have conversations with deceased relatives?

We could call it a good idea for Black Mirror, had it not already been the plot of one episode, years ago.

Whatever the answers to these questions, it is unlikely to change the overwhelming reaction to Amazon’s announcement, which was that it was downright creepy and crossed a line that society is unprepared for. But let’s try to give the idea a fair hearing. We already use earlier technologies – photo albums, home videos and written letters – to remember lost loved ones that would have otherwise existed only in memories. Before they became common, would we have feared that they would make it harder to move on?

Previous moral concerns about technologies that imitate humans have outweighed their real impact. In 2018, Google unveiled an update to its AI assistant that would be able to make phone calls on a person’s behalf to book appointments at restaurants and hairdressers. Predictions soon emerged of a two-tier society in which wealthy consumers outsourced their inconvenient interactions with the proletariat to machines. No such thing has happened.

“Deepfakes” – AI-generated videos that appear to show public figures saying and doing things they have never done – were predicted to wreak havoc on society and threaten democracy as they blur the lines of what is real. At least for now, the panic appears greatly exaggerated.

Amazon could also reasonably argue that the genie is out of the bottle. There is no shortage of synthetic voice tools available online and it will not be long before they can do what Alexa’s researchers are now capable of. 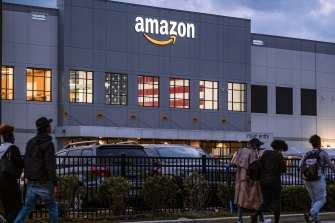 Amazon has never been afraid to push the boundaries with its technology.Credit:AP Photo/Craig Ruttle

Those who have lost loved ones have already used widely available software to create digital impersonations of the deceased, which can be spoken to through chatbots. Reception is mixed: some have found the experience therapeutic, a way to come to terms with grief created by an often-unexpected death. Others fear that communicating with a departed soul could prove addictive and lead someone to detach themselves from real life.

The science on this is best left to psychiatrists. But it is reasonable to ask whether we want Amazon – a company whose primary objective is to sell us more toilet paper and phone chargers – to be at the forefront of developing this technology. Do we want necromancy to be a perk that is only available to Prime members?

Amazon’s track record on ethics when it comes to Alexa is questionable; too often, rapid advances have trumped thoughtful progress. In 2019, it emerged that armies of human workers were listening to conversations with the smart assistant, forcing the company into a series of privacy changes. The assistant has given people offensive or dangerous advice by erroneously pulling snippets of unverified information from the web in an attempt to improve its knowledge base (in one since-corrected case, it told a 10-year-old girl to touch a live plug with a penny).

Summoning the dead seems like a similar case of seeing if something can be done before asking whether it should. At the very least, Amazon could have promised to answer some of the inevitable concerns about resurrecting Grandma before any public launch. As things stand, it simply looks like another case of Silicon Valley hubris.