Most owners are desperate for the handicapper to give their horse as light a burden as possible.

But Team Williams is in something of a quandary as far as their hugely impressive import Yucatan is concerned after his extraordinarily easy win in the group 2 Herbert Power Handicap at Caulfield on Saturday.

They would like him to get a Goldilocks sized penalty – not too big, not too little – for the Melbourne Cup when handicapper Greg Carpenter decides on a weight re-allocation on Monday to ensure he gets a start in that race. 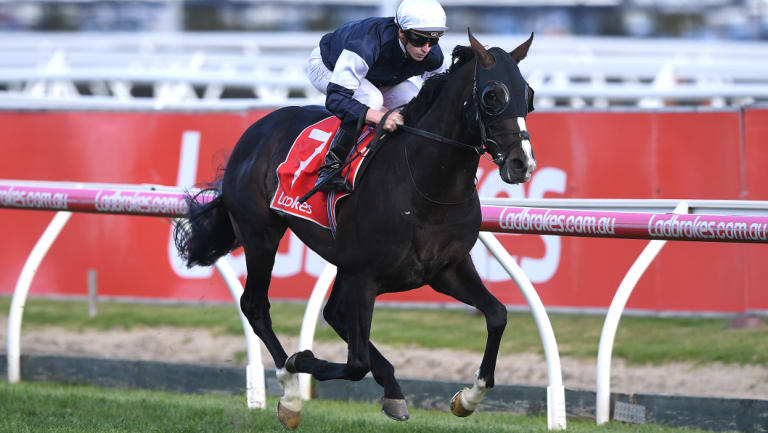 It would also give them the option of running in the Caulfield Cup or resting him if they think that would enhance his Flemington prospects.

His Herbert Power win guarantees him a spot in the Caulfield Cup and connections will decide on Monday whether he backs up there, which would seem a likely course of action.

The conditions of the Herbert Power mean that he would not be penalised should he run in the Caulfield Cup. The last horse to win the Herbert Power and then score in the big 2400 metre handicap was Danny O'Brien's Master O'Reilly in 2007, and there has been plenty of money to suggest that Yucatan could follow suit this time around.

The son of Galileo, who is part of a strong team of sprinters, stayers and middle-distance gallopers Aidan O'Brien has brought to Australia this year, has only been given 52 kilograms to carry in both Cups.

On the evidence of his win in the Herbert Power – which could, had jockey James McDonald pushed him out to the line, probably have been by half a dozen or more lengths – even a penalty would be unlikely to stop him at Flemington assuming he gets the extra 800 metre distance of the Melbourne Cup, which he certainly should.

''The quality of opposition that lies ahead [in the Melbourne Cup and Caulfield Cup should he run there] will be significantly stronger [but] he's going to get a significant penalty.''

Yucatan could be the sharp point of a four pronged Team Williams assault on the Caulfield Cup with The Taj Mahal, Thecliffsofmoher and and Homesman also set for the $5million event.

His was just one of a number of good runs from a Cups point of view at Caulfield at the weekend.

Yucatan was chased home by Metropolitan runner-up Brimham Rocks, from the Chris Waller stable, and English invader A Prince of Arran.

Charlie Fellowes, the trainer of the latter (who was trying to give Yucatan a kilo) was delighted with the effort.

''Huge run from Prince Of Arran at Caulfield. Absolutely no luck in running, getting shuffled too far back, then wide and then stopped in his run. Rattled home but all too late. Well done Tash [Natasha Eaton, the stable representative who is supervising his preparation at Werribee] on a great training performance. Might have to run again before the Cup but where to go?'' he tweeted.

For a horse whose best performances have come over longer trips – he carried 60 kilos when beaten 2.75 lengths by one of the Melbourne Cup favourites Withold in the 3200 metre Northumberland Plate at his last start before travelling to Melbourne, it was an encouraging Australian debut.

But as Fellowes suggested, getting into the race might be problematic. He may be another who has to earn a penalty in another start beforehand to get his weight up and propel himself higher up the order of entry.

English-based Irish jockey Pat Cosgrave had enjoyed group 1 success on Benbatl earlier in the day but was out of luck behind Yucatan on Prize Money, a well beaten ninth, who looks a bit out of his depth.

But Cosgrave will have every chance of adding to his Australian haul next week when he partners Caulfield Cup top weight Best Solution for Benbatl's trainer Saeed Bin Suroor.

The horse has won twice at group 1 level this year in Germany and is a good 2400 metre horse with a touch of class.

''He is twice a group 1 winner this year, and the Melbourne Cup, you need speed and stamina, he is a horse who has all this,'' said Bin Suroor.

Cosgrave is optimistic about a good performance but very wary of Yucatan.

''He's going to have to be on his game to give away the weight. I thought that horse [Yucatan] was very impressive … the race was gone when we were turning the corner.''

Homesman, who had won the Underwood Stakes last time out, made the running before being headed by Benbatl and faded to finish seventh.

Thecliffsofmoher settled at the rear and was still last of the 11-strong field at the 400 metre post before rattling home to finish fourth – a tremendous augury for his prospects in both Cups.

Trainer Darren Weir has a typically strong hand in the Caulfield Cup with the favourite Kings Will Dream (who didn't run on Saturday) while his Night's Watch was not far behind TheCliffsofMoher when finishing sixth in the Caulfield Stakes.

Japanese import Tosen Basil, a narrow second to Homesman at group 1 level last time out, was never in contention in the Caulfield Stakes and finished down the track in second last position while a Waller Caulfield Cup possibility, Unforgotten, could finish only eighth in the same race.