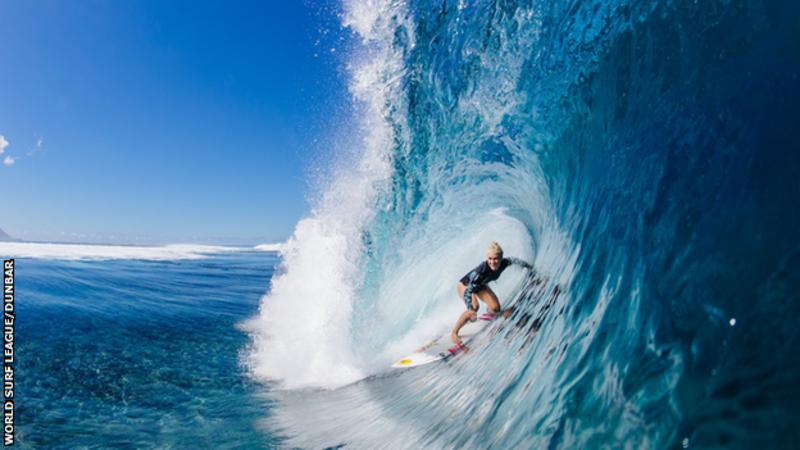 The 2020 World Surf League season has been cancelled because of coronavirus.

The 2021 season will start in November in Hawaii and will, for the first time, feature an equal number of women’s and men’s events on the Championship Tour.

In 2021, the women’s tour will compete alongside the men at Teahupo’o, Tahiti.

Teahupo’o, known as some of the most dangerous waves on the surfing circuit, will be the surfing venue at the 2024 Olympics.

“My whole life I have been trying to illuminate how super-great it would be to have a wave like Teahupo’o on the Tour,” Brazil surfer Tatiana Weston-Webb told BBC World Service.

“I am one of the bigger wave advocates, I was really proud and it will make everything really exciting. It shows the World Surf League is putting a lot of faith in us and we have earned that trust.”

The start of the 2021 Championship Tour later this year will see other key format changes, including the introduction of ‘The WSL Finals’.

Following the 10-event season, the world titles will be decided in a single-day event in a surf-off format in September 2021, featuring the top five ranked male and female surfers.

The Championship Tour had been due to start in March but was postponed, and its cancellation means the WSL will not crown world champions for the first time in its history.

“We feel surfing is one of the safest sports that you could do in a pandemic, it’s outside and it’s non-contact,” Logan added.

“It could be very safe with the protocols we have in place.”