“I do at least three hours before a big match like that and same with the Pro Tours, basically everything I play in I do a good three hours before,” Whitlock tells The Darts Show podcast at the Marshall Arena.

It’s a response to a question that has come about because of the new set-up at the new-look Matchplay.

The Sky Sports press balcony overlooks both the stage and the players’ practice area, and on Tuesday it was noticeable that Whitlock arrived early, took himself to the furthest board and threw dart after darts before being called to the stage.

What followed was an 11-4 demolition job on Van Gerwen who joined defending champion Rob Cross and world No 3 Gerwyn Price in exiting before the quarter-finals. World champion Peter Wright followed on Tuesday night as a seismic return to big stage darts has left everyone transfixed.

Whitlock’s win may have surprised many but not the man himself.

“I know he’s beaten me like the last 14 in a row but I have beaten him in exhibitions, not many times,” he adds with a smile. 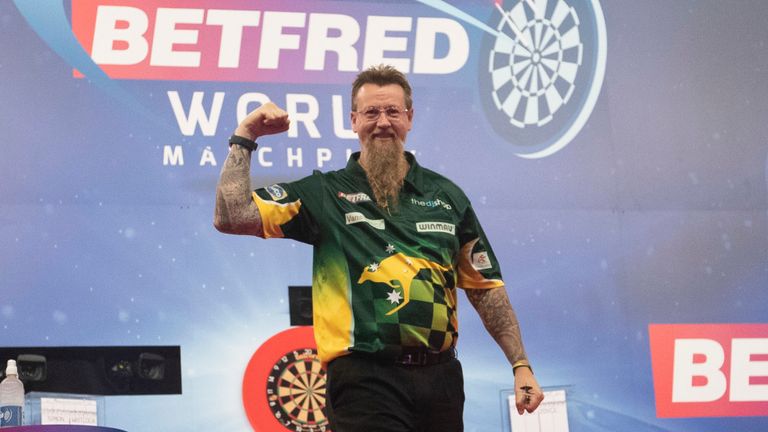 “I didn’t really think too far ahead, I just played it one leg at a time, trying to increase the lead and not let him get back in the game.

“Michael did miss a few doubles early doors but I just took advantage and I just didn’t let up, I just kept pounding away and concentrating on what I was there to do and did the job.

“I just know I’ve been working really hard in the last six months since we’ve been in lockdown and doing things correctly for myself and my body.”

There’s a steely determination to Whitlock that is reminiscent of when he burst onto the PDC scene, amid a barrage of huge finishes and a run to the World Championship final in December 2009.

A couple of years later, at the Worlds, came the Wizard’s last big win over the Dutchman but he has remained a presence in the world’s top 16 ever since. It’s an impressive decade of work that includes a Premier League final a World Grand Prix final and three European Championship finals, including his solitary major TV title.

In a tournament where only two of the world’s top 10 have reached the quarter-final stage, Whitlock has as much pedigree as anyone bar Adrian Lewis and Gary Anderson who are the multiple major champions. 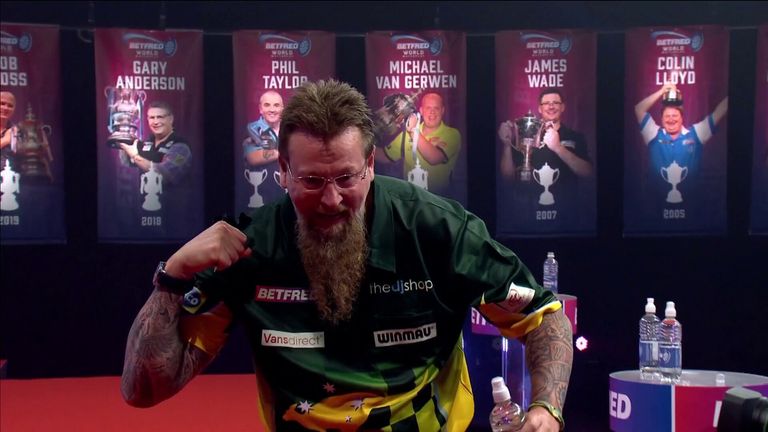 But the unassuming Aussie is happy. “They might forget me. The top guys get more attention than the lesser players unless you’re coming through and winning lots of tournaments. I’m happy, I like to go under the radar now a bit.

“There’s still life in the old dog yet.”

The mention of a dog brings about a smile. The Wizard has a French Bulldog named Blue, who has been a big part of the lockdown fitness kick that has helped give him a renewed focus, online darts played a big part too but like many Whitlock is pleased to have been able to get fit.

Adrian Lewis, Michael Smith an Rob Cross have all spoken about the chance to get healthier as darts’ relentless nature on the road doesn’t lend itself to the best of lifestyles.

“It’s been great for me, I didn’t even think about darts once we stopped.

“I started working out, eating healthy, walking my dog twice a day, just getting healthy really because darts isn’t a healthy sport, always eating bad and always sleeping out of our suitcases.

“The main objective was to get myself fit and ready. I’ve got a French bulldog. Can’t take him too far, only like 25 minutes to half hour each walk, but it’s doing me more good than him.”

Gary Anderson is next, and Whitlock acknowledge his record against the 2018 champion is not good, but it wasn’t against Van Gerwen.

With two semi-finals and two quarter-finals the Matchplay is a format Whitlock likes and he is in the mood to take advantage.

“I do enjoy the longer game, it gives you a chance to relax a bit more and get into the game, even if you get behind you can get back, I’ve done that a few times.

“All the players still in are class players. They’re all capable of 100 plus averages and blowing you off the board but I’m as confident as anyone else still left in. My life is very good, I’m enjoying life.”