A record broadcast rights deal for the NFL in the US demonstrates that sport is still the axis on which the TV world turns.

Despite Nine’s former chief executive, Hugh Marks, claiming “it’s not a given that NRL has to be part of our future”, the $US100 billion ($129 billion) 11-year deal signed over the weekend between the major US broadcasters and the NFL shows networks can’t exist without leading sports. 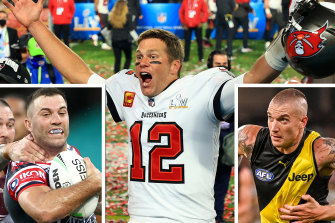 “This is good news for the NRL and AFL,” says one of Australia’s top sports rights advisors, Colin Smith of Global Media and Sports.

While the pandemic forced a renegotiation of TV rights in Australia and created an expectation the fees paid by broadcasters would fall globally, Smith argues there are two exceptions: where a sport is a nation’s unique or dominant game (AFL in Australia, NFL in the US, IPL in India), or where it is the dominant nation for a sport (NRL in Australia, NBA in the US, EPL in England).

“In Australia, we have two world-class leagues in the AFL and NRL that are ‘must watch’ across media platforms that fans passionately follow,” he said.

Smith’s analysis is bad news for Australian rugby, which is seventh in the international rankings. The A-League is ranked the 11th league in Asia behind countries like Iraq, Iran, Thailand, UAE and Uzbekistan.

“The COVID-19 interrupted 2020 season proved that even without crowds attending games in Australia, fan interest on TV across both codes was very strong,” Smith said. “What this means for the NRL and AFL is the value of their media rights will continue to be very strong and likely to grow in a competitive market.”

The NFL deal is both stratospheric in terms of the dollars involved and the long-term commitment of broadcasters.

The $US100 billion-plus agreement is a doubling of the value of NFL rights; beginning in 2023 and to be shared across the traditional linear broadcasters of CBS, NBC, Fox, ESPN and ABC. It will be broadcast on free-to-air TV, pay TV and streaming platforms.

Amazon Prime is the new broadcast entrant, buying the 18-game NFL Thursday Football Package for the first time on its streaming service. This is Amazon’s largest investment globally in sports media rights, spending about $US1 billion per year. While very significant, it represents only 10.5 per cent of the total value of the NFL media rights.

Meanwhile, in Australia, streaming appears the platform of the future, with Foxtel’s Kayo promoting NRL and AFL games, and Nine Entertainment’s Stan Sport showing the majority of its Rugby Australia games.

Yet Amazon Prime’s contribution to the NFL deal is the equivalent of only $36m a year in terms of the NRL’s original $1.9 billion five-year contract.

The NRL has extended its pay-TV rights with Fox until 2027 for an undisclosed fee, although ARL Commission chairman Peter V’landys revealed it represents about two-thirds of the code’s broadcast income. It is not known whether exclusivity of streaming rights is part of the deal.

V’landys is poised to enter negotiations for the sale of NRL free-to-air rights, with the current renegotiated arrangement expiring at the end of next season.

The Australian view that FTA rights are a diminishing proportion of broadcasting fees is at odds with the NFL experience, where the chief executive of CBS Entertainment, George Cheeks, described American football as “must-have content that stands above the crowd in a fragmented television universe”.

Smith says: “In negotiations with FTA broadcasters, if I were the NRL I would be using the ‘NFL Playbook’, stressing it is a must-have product and also be seeking offers for FTA packages over an extended term across free content and pay content for terms extended to 2030 and beyond.”

A decision by the federal government to delay a review of the anti-siphoning list until April 2023 means FTA networks continue to have first choice of NRL and AFL, although it has already relaxed those rules with Australian cricket ODIs, now broadcast exclusively by Foxtel/Kayo. Fox chief Patrick Delany has implied Kayo Freebies, which gives subscribers access to top sports for no extra charge, satisfies the current legislation. Similarly that would apply to Amazon Prime if it bids for all or part of the FTA rights for the NRL.

Channel Ten, which telecast NRL and AFL more than a decade ago, is now the third FTA network in the nation.

The demise of Ten, together with the billion-dollar-a-year NFL deal, appears a rebuttal of Australian TV chiefs who warn the price tags they pay for sport threaten to hang like toe tags on their networks.

Sports news, results and expert commentary delivered straight to your inbox each weekday. Sign up here.