The most important sailing manoeuvre Andoo Comanche made in winning the Sydney to Hobart occurred within the first 15 minutes of the race, while the supermaxis were still in Sydney Harbour on Boxing Day.

The commodore of the Cruising Yacht Club Australia, Arthur Lane, said the decision to preemptively make a penalty turn in the harbour after another boat protested against them saved their line honours victory.

“The two [boats] who had protests, or thought they could have a protest against them, both exonerated themselves,” Lane told the Herald referring to Comanche and fourth-place Hamilton Island Wild Oats.

He said the two supermaxi crews did so by completing “the 720 turns, so there was no need for any protests.”

Andoo Comanche, skippered by John Winning jnr with his father also onboard, hit the first turning mark – which is illegal under international sailing competition rules – in the 12th minute of the race as it attempted to escape a frothy Sydney Harbour.

“We’ve gotta do a turn. I think we hit [the mark], a Comanche crew member could be heard saying on the live television broadcast of the race. 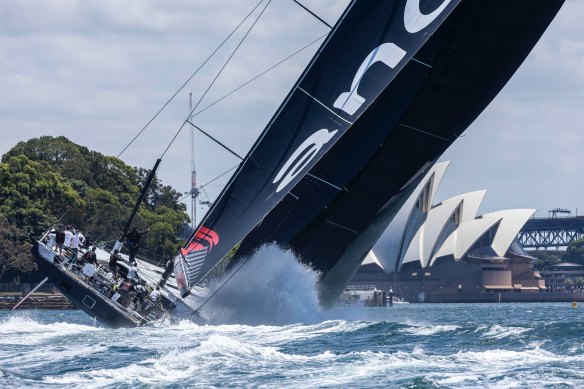 Andoo Comanche was forced to take a penalty turn just minutes into the race after hitting a mark.Credit:Andrea Francolini

“Where can I do it? I’m not having a protest,” they said.

Within seconds, the crew undertook a 720 penalty turn inside the harbour, which involved completing two spins in the water.

The move left the crew behind their fellow super maxis, competing with yacht URM for fifth place as they turned south – but it saved them their line honours.

If Comanche had not completed the penalty turn, it is highly likely that another boat would have protested against the crew when they arrived in Hobart. This could have resulted in the stripping of line honours, which is what Wild Oats experienced in 2017 when they were involved in a near collision at the beginning of the race, but did not complete any penalty turns. Despite finishing first, line honours were taken away. 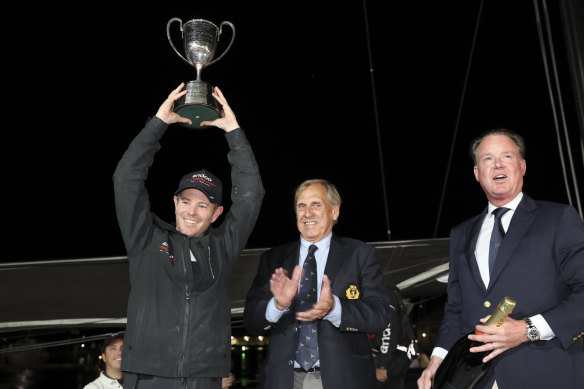 John Winning and John Winning Jr and crew aboard Andoo Comanche have taken line honours in the 2022 Sydney to Hobart yacht raceCredit:Salty Dingo/CYCA

Skipper Justin Shaffer told reporters on Monday afternoon that a boat had raised a protest flag against his boat, but refused to say who had done so.

The comments from the commodore capped a day of growing winds and increasing challenges for boats still on the water. As of 5pm Wednesday, eight boats had been forced to retire, including several in the middle of Bass Strait.

Eighty-one boats were still sailing on Wednesday afternoon and were preparing for a rough night at sea. A strong wind warning was issued for the Derwent Estuary, while wind and wave conditions in Bass Strait are expected to worsen overnight.

The majority of boats were approaching the northwest corner of Bass Strait by the afternoon, but the two-hander Currawong was still preparing to cross it after an extended break in Eden to reassess the changing conditions.

“[Currawong’s Kathy Veel and Bridget Canham] personify so much of the original spirit of the race,” said commodore Lane. “They have been sailing within their means. And I really hope they finish this.”