The 2018 college football season is over. Clemson is the champion. There are a few milestones to tide us over — national signing day (which is not what it used to be), spring games, summer media days — but the cold reality is, we are about eight months from the next game.

Even college football addicts are likely to need a break after this whirlwind season, which began with coaching turmoil and ended with a surprise bludgeoning of Alabama. Along the way, Central Florida nearly got to claim another share of the national title before it lost the Fiesta Bowl to No. 11 Louisiana State — albeit by a mere 8 points while playing without their starting quarterback.

Alas, as we while away our time with work, family and worrying about where Bryce Harper will sign, here are seven observations and thoughts inspired by the 2018 season to guide us to the 2019 season’s kickoff.

College football is now college basketball. O.K., not quite. Veterans still matter and improve year-to-year — no coach brags about having a young defense — and, of course, N.F.L. rules still effectively keep underclassmen in the college game. But more than ever, and particularly at the most important position, it seems you are only as good as your latest recruiting class. The top five Heisman Trophy vote-getters were quarterbacks who were either transfers or in their first season as the starter, or both, and four of the five are entering the N.F.L. draft. And none of them was the Clemson freshman Trevor Lawrence, who on Monday night proved to be perhaps the most valuable quarterback of all.

Who could benefit from this dynamic next season? Ohio State, because the highly rated Georgia backup Justin Fields is transferring there and reportedly seeking N.C.A.A. permission to compete immediately; and Oklahoma, which secured the commitment of the sole class of 2019 quarterback who was given five stars in 247Sports’s composite ratings.

“As far as expanding the number of teams in the Playoff, it’s way too soon — much too soon — to know if that is even a possibility,” said the chairman, Mark Keenum, Mississippi State’s president. “It’s fair to say the speculation about expansion has outdistanced the reality of what the commissioners and the presidents have discussed.” There are seven more years on the current playoff contract, so brace yourself for more worthy conference champions like Ohio State getting left on the outside looking in.

For coaches, bad behavior matters. Maryland’s D.J. Durkin, as prominent a coach as that program has had in decades, was suspended and then fired (after a one-day reinstatement) for, according to an internal report, presiding over a flawed program at which an athlete died after a grueling practice. And Ohio State’s Urban Meyer, the only coach not named Nick Saban to win national titles at two programs, was suspended for three games for mishandling allegations of domestic violence against a former assistant, creating a rupture that most likely contributed to his decision to retire.

It would be easy to think such decisions were obvious, even inevitable. But in recent college sports history, excuses were routinely made for successful coaches. However much that may still be true, it is less true now than it used to be. 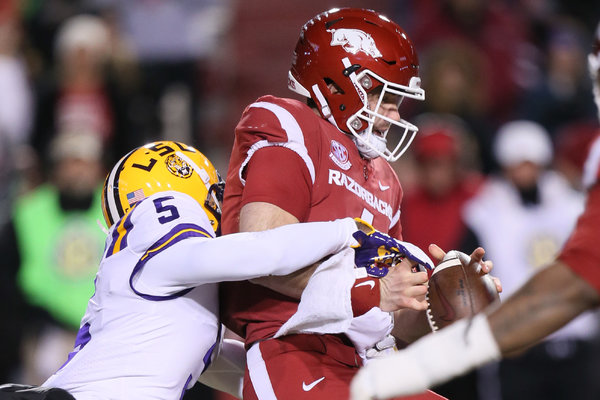 Stasis is worse than losing. Would you rather be Southern California or Arkansas? The Trojans were 5-7, while the Razorbacks were 2-10. But U.S.C. is keeping the four-year head coach who presided over that season, the one who just lost his prospective offensive coordinator, Kliff Kingsbury, to the N.F.L. Arkansas can genuinely claim it is rebuilding: that 2-10 campaign came the first year after it replaced its athletic director and head coach with respected talents from Group of 5 colleges. Somehow it is on pace to haul in its best recruiting class in nearly a decade.

College football may not have quite the tank-and-improve infrastructure of the professional leagues, and yet programs are more likely to underperform because a change has not been made than because one has.

The Big Ten is wide open again. In Urban Meyer’s seven seasons, the Buckeyes won only (“only”) three championships. Even that is deceptive, though, because in the other four seasons, Ohio State either was undefeated but ineligible for the championship because of sanctions, or suffered its sole conference loss to the eventual champion. In other words, the road to the Big Ten title ran through Columbus.

But now Meyer is gone. The first-time head coach Ryan Day, who filled in ably while Meyer was on leave, is replacing him. Wisconsin looks likely to move on, finally, from Alex Hornibrook at quarterback, while Michigan will get another year of Shea Patterson under center. Nebraska is in Year 2 under Scott Frost. Penn State is still recruiting well under James Franklin. Michigan State still has Mark Dantonio, Iowa Kirk Ferentz. Purdue held on to Jeff Brohm! It is anyone’s league.

Texas may be back. Before the Sugar Bowl, one could have dismissed the Longhorns, who were 9-4, their signature win coming in a close and weird game against Oklahoma, which returned to defeat them soundly in the Big 12 championship game.

Then Texas outplayed Georgia, last year’s runner-up, 28-21, giving the Longhorns their first 10-win season since they were the national runners-up in 2009. The third year tends to be a big one for the best coaches, and 2019 is Tom Herman’s.

Bama will be back. Alabama’s loss to Clemson on Monday night was not close. It was not even close to close. Alabama did not score in the game’s final 44 minutes. You could change each of Tua Tagovailoa’s interceptions to touchdowns, giving Alabama the extra points and erasing the 7 points Clemson scored by returning the first interception for a touchdown, and Clemson would have still won by 7.

Now Alabama will have to go back to the drawing board, with only … its Heisman runner-up quarterback, its all-Americans at wide receiver and on the defensive line, the top-ranked recruiting class and Nick Saban, still the winner of five of the past 10 national championships. It is not true that the Tide’s dominance will last as long as the actual tide does. But it sometimes feels that way.