As a small-town boy from Casino, Cody Walker never envisaged representing his culture on the big stage.

On Friday night, he will captain the Indigenous All Stars after coach Laurie Daley labelled him the "standout leader" in a squad which boasts big names such as Andrew Fifita, Latrell Mitchell and Will Chambers. 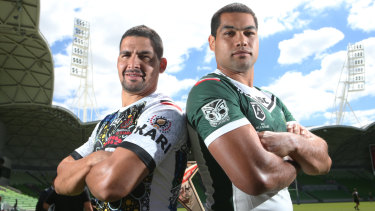 Clash of cultures: Cody Walker (left) will lead the Indigenous All Stars against Adam Blair’s Maori All Stars.Credit:AAP

"We lost a lot of leadership over the last 12 months and we were undecided on who was going to be captain," Daley said.

"We just wanted to see how guys interacted through the week and Cody has really shown his qualities there.

"Cody will thrive on being captain and he will get his own game in order but also lift the other boys around him."

For Walker, wearing the armband on Friday will simply be surreal.

"It’s something you dream about as a kid," he said.

"Growing up in Casino five or six years ago, if you told me I would be the Indigenous captain of an All Stars team I would have probably laughed at you and told you to go away.

"But it’s a surreal moment, something I’m really proud of and I can’t wait to get out there to represent my people."

The Souths star still recalls watching the inaugural All Stars match in a Gold Coast apartment in 2010, a night which inspired him to one day represent his people.

"Just the sense of pride I got watching the boys run out and play for their culture, it was amazing.

"To get this far is something I'm very, very proud of and I just put it down to the support that I get from my partner at home and my two kids.

"They've been a great support base, my family." 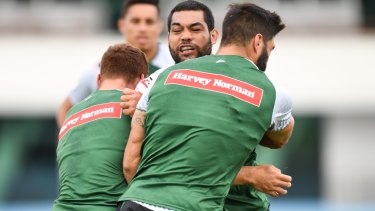 He was an NRL All Star rather than a Maori All Star that night and has played in many big games both before and after his first All Stars cap.

He won a World Cup with New Zealand in 2008 and a premiership – which was later stripped – with the Storm in 2009 but he's never been as nervous in the lead-up to a match as he was this week.

"It’s a massive honour and a privilege to be able to represent my culture and heritage and I’m proud of it.

"Why I’m nervous is because I don’t want to let my people down.

"We get an opportunity to do it on a big stage against the Indigenous boys and it’s a big opportunity.

"I’m humbled but nervous at the same time."

The meaning underpinning this match for players and staff alike has been evident every time a representative from either camp has spoken to reporters this week.

Both camps have embraced their cultures in the lead-up, eliminating any chance of the match being a limp contest mirroring some All Stars games of recent years.

Win or lose, those involved know this is about much more than a game of footy.

"It’s a privilege for everyone to be part of this game. Regardless of the result, I think everyone can be proud of what they’ve done both on and off the field this week," Walker said.

"We’re very respectful of the Maoris and what they have contributed to this game and we hope it’s a game which continues to thrive and to get support from our people.

"It will be a great contest regardless of who wins and loses because it is a lot more than a game of footy."