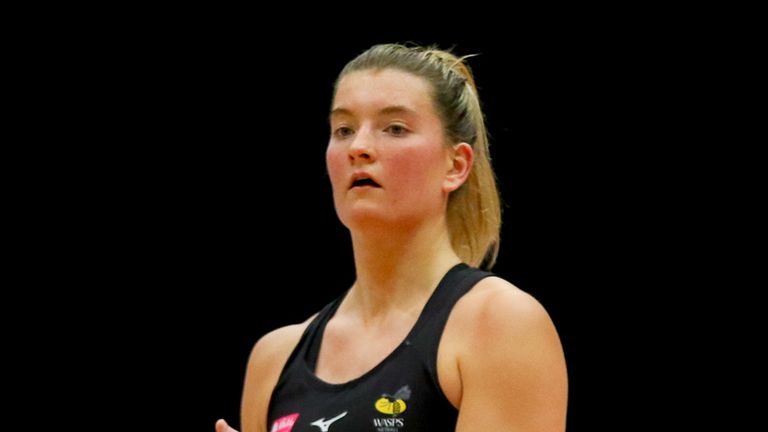 Loughborough Lightning were also victorious and Sara Bayman’s outfit remain at the top of the Superleague table after 27 matches.

The competition continues on Sunday with three more contests being streamed on the Sky Sports YouTube channel from 2pm.

Strathclyde Sirens and Saracens Mavericks start proceedings before Lightning and Wasps return to court, to take on London Pulse and Leeds Rhinos Netball.

With Wasps off the back of a two-week break and Thunder eager to bounce back from a shock 25-goal loss to Team Bath on Friday, the stage was set for a cracker.

In the opening quarter, Mel Mansfield’s side showed no signs of rust and every Thunder played had a look of determination etched across their face.

An intense goal-for-goal first quarter ensued, and Wasps needed the final seconds to create a small 11-9 cushion. The second started as a carbon copy of the first, before Wasps’ all-court pressure forced Thunder into making errors and then personnel changes.

At 20-13 down, Karen Greig decided to introduce Caroline O’Hanlon at WA and shifted the versatile Laura Malcolm to WD. Malcolm made her presence felt but Wasps remained calm, and went into the interval in charge at 24-17 up.

With the words of Karen Greig and Tracey Neville ringing in their ears, Thunder showed their grit in the third quarter. They matched Wasps once again and after enjoying the momentum in the final stages, the contest was poised at 37-30 with 12 minutes to play.

Yet again, Wasps remained cool in the face of pressure. Mansfield’s outfit kept it simple; they focused on converting their own centre passes to goal and they put the onus on Thunder to try and do something special.

Sophia Candappa led by example in attack and although Thunder maintained their own fluidity, and young Berri Neil showed her credentials off the bench, they’d left themselves with too much to do.

Loughborough Lightning maintained their grip on top spot in the Vitality Netball Superleague with a convincing 56-37 victory over Surrey Storm.

Storm’s head coach Mikki Austin rang the changes following their 49-46 defeat to Severn Stars, but for the second day in succession, they were punished for a slow start, as Loughborough established a 32-20 lead at the interval.

Lightning were able to largely nullify Storm’s attacking line with an impressive full court defence, with the formidable trio of Alice Harvey, Sam May and Beth Cobden starring for Sara Bayman’s side.

Player of the Match Hannah Joseph dictated proceedings for Lightning and Mary Cholhok continued her prolific start to the season, registering 34 goals before heading off after the third quarter.

Storm were able to disrupt Lightning’s attacking end as the contest progressed – with Felisitus Kwangwa producing an impressive individual display – but Loughborough were professional throughout to make it five wins from six matches.

In the second encounter of the day, Team Bath worked their way through a disjointed performance to secure a 49-30 victory over Severn Stars.

After an impressive 25-goal result against Thunder on Friday, Anna Stembridge decided to mix up her line-up and hand starts to shooter Betsy Creak, Jess Shaw and Tash Pavelin and in attack, they struggled to settle.

Lucy Herdman and Iman Thomas pressured Creak in the circle, however mistakes also littered Stars’ work. The result was a low-scoring start, with just five goals being scored in the opening seven minutes and Bath holding a 10-4 lead at the first pause.

Stembridge introduced Kim Borger for the second quarter and she provided some much-needed composure for Bath. Stars continued to hustle hard though, but once again Bath finished strongly to press 24-10 ahead at half-time.

The second half followed the same pattern as the first, with Bath battling to find their rhythm and Stars working tirelessly until the final whistle, something that pleased their head coach immensely.

“We took that game to them and we actually gave a lot of that to Bath. We performed this weekend and we performed today,” Bessell said at full-time.

“It was all about making sure we had a good performance, that was an outstanding performance from my team today and I’m so proud of what they did. We definitely took it to Bath.”

Sky Sports is your home of netball. The Vitality Netball Superleague continues on Sunday with three matches back-to-back, streamed live on the Sky Sports YouTube channel from 2pm.