Victory have already picked up nine points this season courtesy of three wins on the spin, the last a morale-boosting triumph over rivals Sydney in NSW last Sunday.

Wanderers have only four points less, with five, but have failed to impress many onlookers and have only one win from five attempts in 2018-19.

Yet Victory boss Kevin Muscat is adopting a wary approach to Saturday night's fixture against a team he believes are capable of much more than their efforts this season have yielded.

While Victory are a work in progress, Muscat says the Wanderers' results are not a true reflection of the form they are in, despite the fact they crashed to a home defeat against Newcastle last weekend. 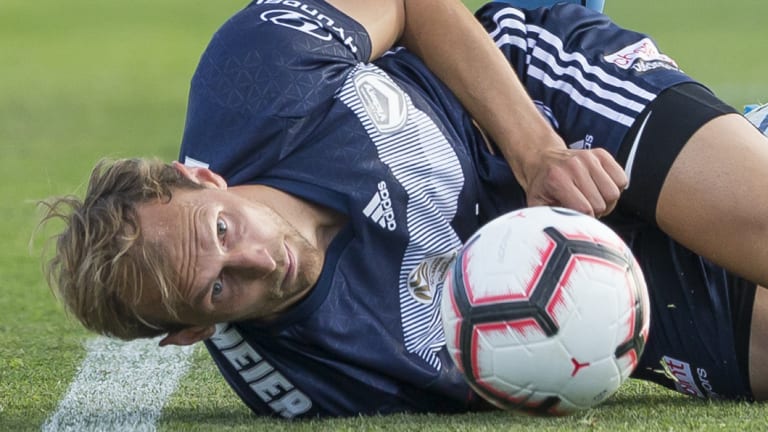 Georg Niedermeier has been ”nursed back” to health this week after a head knock.Credit:AAP

''From analysing them have been chopping and changing and really haven’t settled on an XI .

''They’ve got some pace in wide areas and obviously a very good striker and, as I said, they’ve been creating a lot of chances in last week's game, certainly that was the case.

''So first and foremost it’s what we do in relation to minimising it.

''That’s not only without the ball, we want to put teams under pressure when we’ve got the ball and ask some questions of the opponent.''

Muscat does have to make some calls over selection, such is the strength of his squad.
German centre-back Georg Niedermeier got a head knock against Sydney and has been ''nursed back'' this week, Muscat said.

''He’s on track at the moment going through all the various stages with the doctor. So we’ll just continue monitoring him.

''We continue to be building because the group that’s the first time really that they got to play with Ola and likewise Ola with the group in a competitive game so the understanding between the team and Ola and vice versa will continue to grow.

Victory return to Marvel stadium for the first time since a surprise home loss to Melbourne City in October. There has been plenty of controversy over the condition of non-soccer-specific stadium pitches around the country, but Muscat is optimistic the Docklands surface will not be a problem.

''We have seen some stuff and got enough information that the pitch is okay, it will be fine.
We haven't been on it this week. We have played some games there this season. Surrounding the outside of the pitch is not too clever, but the actual surface should be fine.''

Diane Kruger and Norman Reedus are feeling the love. The 43-year-old Inglourious Basterds actress and the 51-year-old The Walking Dead star were seen packing on…