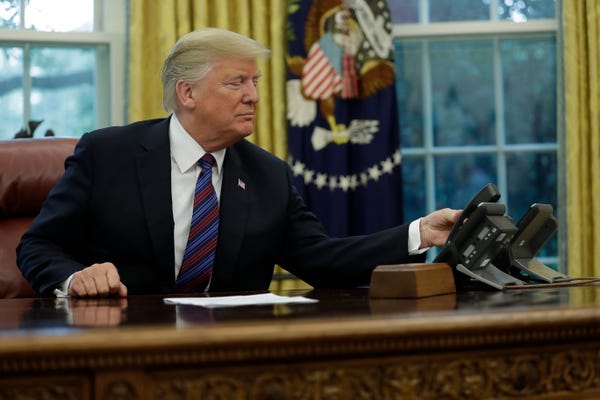 FIGHT ISLAND — President Donald Trump called Dana White after Joaquin Buckley's highlight-reel knockout and asked the UFC boss if he had ever seen anything like it before.

Not many people have.

The 26-year-old American threw a kick at his opponent Impa Kasanganay at the most recent Fight Island show Saturday at the Flash Forum in Abu Dhabi, but Kasanganay caught the kick and had Buckley's foot in the palm of his hand.

Using ingenuity and athleticism, Buckley turned a moment of weakness into a strength by pivoting into a jump spinning back kick.

Kasanganay appeared to be knocked out before he had even hit the deck.

The move stunned Octagonside onlookers who were photographed open-mouthed and with their hands above their heads.

The UFC's social media channel called it the "most unbelievable" knockout in its entire history.

White fielded phone calls through the night about the finish, and even told the Yahoo Sports combat correspondent Kevin Iole that he spoke to Trump midweek.

"I talked to the president and he says to me, 'Oh my God, this Buckley knockout … have you ever seen anything like this?'

"And I said, 'Mr. President, nobody has ever seen anything like this. It's the most viral thing on the internet.'"

Iole then spoke to Buckley himself and relayed the story about White and Trump.

"The whole world was shaken up by it," Buckley told Iole. "Even Donald Trump spoke about it, had things to say about it. So I'm just happy. This is awesome.

"It's still unbelievable. I got to give respect to the man of the house — our leader — and just be appreciative for being so ecstatic and speaking to my boss about it because it might give me that extra bonus!"

According to White's past comments, Trump is a huge fight fan.

"I'll have a fight on a Saturday night and by Monday I'll get a call, it'll say, 'Mr. White, it's the White House, can you take a call from the president?'"

Their friendship goes back to 2001 when Trump persuaded White to put his first UFC event, UFC 30, at one of Trump's properties — the Trump Taj Mahal in Atlantic City, New Jersey.

From there, their relationship blossomed and Trump even asked White to speak at a Colorado rally in February, where White called Trump a fighter.

The next month, White was asked whether he was concerned if the UFC lost fans because of his friendship with Trump and he said he "doesn't give a s—."

White said he also got a phone call from Trump when he was Octagonside in May, having just held his first pandemic-era fight card — UFC 249, where Justin Gaethje produced a masterclass to finish Tony Ferguson in the fifth round.

Trump said: "Congratulations, you did it. I knew you were the guy. I knew you'd get it done," according to White.