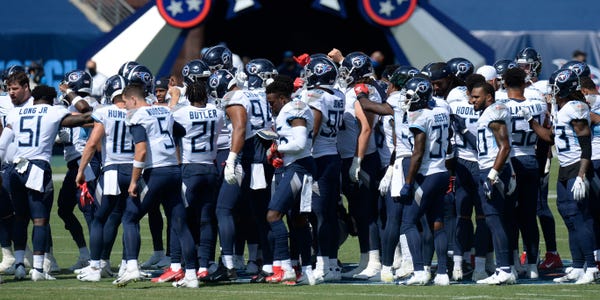 Despite being told by the NFL not to gather amid an outbreak of COVID-19, several Tennessee Titans players held a private practice away from the team facility, according to NFL reporter Paul Kuharsky.

Kuharsky reported on Wednesday that a group of Titans players held a workout at Montgomery Bell Academy on September 30, one day after it was reported that three players and five personnel members had tested positive for the novel coronavirus.

The Titans practice facility was closed following the positive tests. The team was reportedly told there would be "no in-person meetings, workouts, or activities at the facility or elsewhere."

The Titans' Week 4 game against the Pittsburgh Steelers was postponed.

On Wednesday, two more Titans players tested positive for COVID-19, putting their Week 5 game against the Buffalo Bills in jeopardy.

Kuharksy reported that students on the campus saw a group of players working that they identified as Titans players. Kuharsky added that one student identified quarterback Ryan Tannehill.

Kuharsky shared photos of the workout:

Before the Titans' Week 4 game was postponed, some players on the Titans and in the overall NFL world expressed concern about being unable to work out during the week.

Tannehill told reporters (via Kuharsky): "You can't sit around on the couch for a week and be on a Zoom meeting and expect to go be at a physical peak on a Sunday, or whenever the game is going to be. It's going to look a little bit different for everybody, what they're able to do, where they can work out, in a garage, in a gym somewhere, I'm not even sure.

"Every man on this team is charged with prepping themselves, getting their bodies right, making sure that we're running, we're conditioned, and ready to go whenever the game comes around."

On Wednesday, Sports Illustrated's Albert Breer reported that during a Monday meeting with head coaches and GMs, in an attempt to reinforce COVID-19 policies, the NFL showed photos of Titans players not wearing masks at their practice facility.

Kuharksy wrote that the violation of rules could result in fines and/or the loss of future draft picks.

The Titans did not immediately to a request for comment.