World Cup-winning Wallabies coach Bob Dwyer has pointed the finger at Australian players and not under-siege coach Michael Cheika, claiming in the wake of another embarrassing defeat to New Zealand that they are not fit enough.

The fallout has continued from Australia’s 40-12 loss to the All Blacks at Eden Park, which completed their 16th consecutive Bledisloe Cup series defeat, and the attention has now been turned onto the players' condition.

Last year in June, Cheika put his foot down and stated publicly that players' fitness was not where it needed to be. He put his men through brutal fitness sessions in the lead-up to the Rugby Championship but, like this year, they were unable to knock off the world’s best team.

Even as recently as Sunday, the day after the Wallabies’ sixth loss from seven Tests, Cheika reiterated his view that fitness levels were superior to 2017.

“[Fitness] still can improve but I think it’s better," he said. "It’s about the key moments and reacting mentally with urgency to shut those situations down.”

It’s an observation that even Dwyer, one of Cheika’s mentors and good mates, can’t cop.

“I’m sure they’re not fit enough,” Dwyer said. “In Sydney there were people walking with half an hour to go. You can’t really pin that on the Wallaby coaching set-up.

“I thought the comments before the Test misled us all a bit. We were getting comments out of the Wallaby camp that fitness had definitely improved and skill level had improved. Well, that didn’t appear to be the case.”

Dwyer's comments echo that of former All Black Jeff Wilson after the first Test.

"Either they've trained too hard and they've gone into the game fatigued and the legs have gone early, or they're not in the right nick," Wilson told the Sky Sports Breakdown show.

Data coming out of Super Rugby clubs suggests players are better conditioned but at times in Sydney and Auckland, a select few in the gold jersey looked to be out of breath.

On the issue of whether Cheika is the right man to take Australia to the World Cup, Dwyer, who coached the Wallabies to glory in 1991, stood by the incumbent boss. 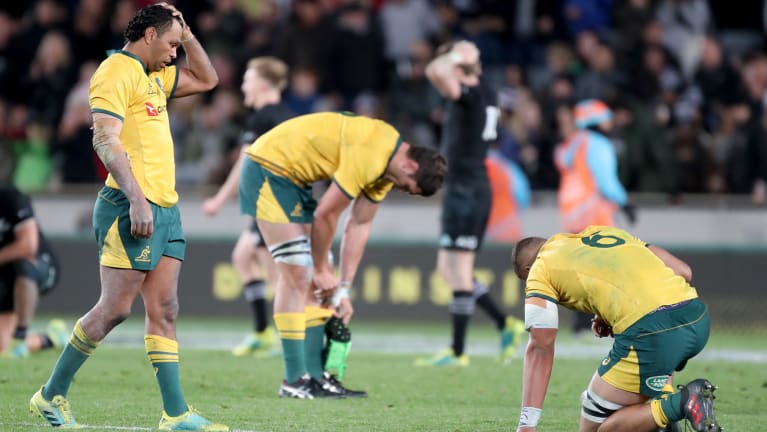 “My opinion is he is the coach and that’s that,” Dwyer said. “It wasn’t too long ago when he was being hailed as a saviour. He can’t have gone backwards I wouldn’t have thought. That’s misplaced [to call for Cheika to be sacked]."

The Wallabies have a week to reflect on two average performances before assembling on the Gold Coast ahead of a Test against South Africa in Brisbane.

The importance of the Springboks match on September 8 cannot be over-emphasised but to make matters worse for the Wallabies, South Africa's coach Rassie Erasmus has warned the visitors will come out all guns blazing.

Plans to give a handful of younger players game-time against the Wallabies have been scrapped, with Erasmus seething after his men suffered a 32-19 loss to Argentina in Mendoza.

“We had certain plans that we wanted to try against Australia but that's out the window now," Erasmus said. “We have to get back to winning ways again. It's win at all costs now.”

Of course, the Wallabies will say publicly they wouldn’t want it any other way. At the same time, they desperately need a win to alleviate the intense criticism and force rugby fans to put down their pitchforks.

Despite what the scoreline might suggest, Dwyer believes the Wallabies were better at Eden Park than in Sydney.

“Clearly New Zealand were way superior but only for parts of the game,” Dwyer said. “I thought we were ordinary in Sydney. There was a lot of our game that wasn’t up to scratch.

“We virtually made no line breaks in the first Test and we improved that hugely in the second Test. OK, we didn’t go all the way and get points, but we gave ourselves an opportunity to score.”

Asked whether the gap had widened between the All Blacks and Wallabies with a year to go before the World Cup, Dwyer said: “Possibly, but it’s not the first time this has happened. They’ve won the last two certainly but they’ve conveniently forgotten how close they were to losing the [2011 World Cup] in New Zealand. Some people might think they were extremely lucky to get away with that one."