The incredible moment Great Britain star Jake Wightman’s emotional dad Geoff commentates on him winning 1,500m gold at the World Athletics Championships… as mum Susan rushes up to the commentary box to give him a hug!

This was the moment the father of Great Britain’s Jake Wightman commentated on his son’s 1,500m gold medal at the World Athletics Championships in Oregon.

Wightman, 28, took the world title in Eugene on Tuesday night with a narrow win, which was announced at Hayward Field by his dad and coach Geoff.

A video shared widely across social media showed dad Geoff in the commentary box calling the final straight of the race, with his son and Ingebrigtsen jostling for position.

‘It’s going to be close,’ Geoff is heard in the clip, ‘but Jake Wightman wins gold!’

He then raises both arms in celebration as the person filming gives him a pat on the back as he becomes emotional. 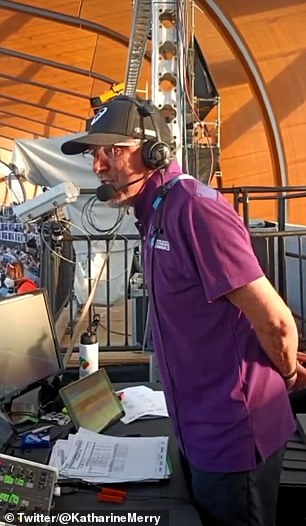 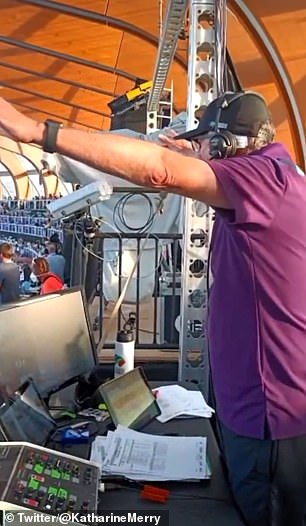 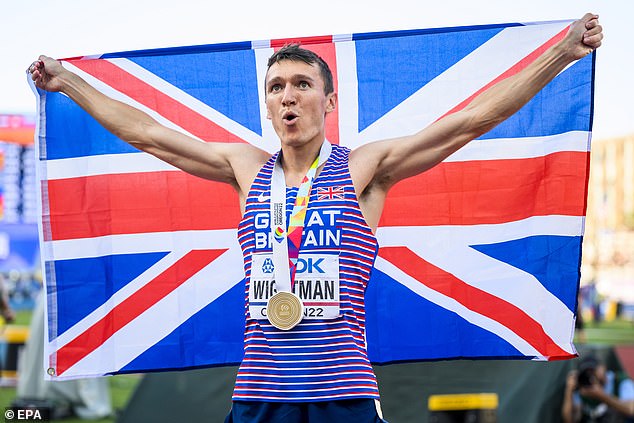 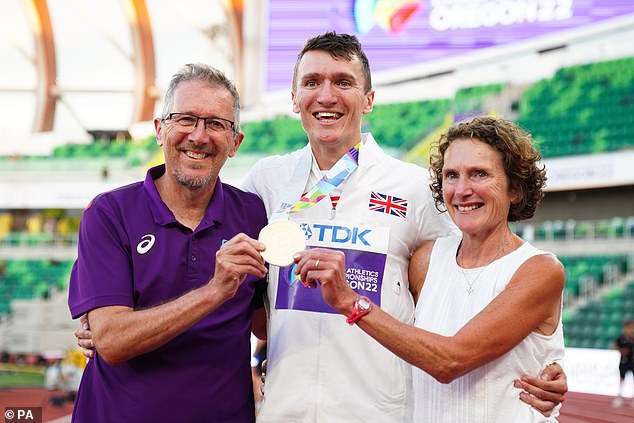 The clip then switched to a different angle for his mum, Susan, who was positioned in a seat close to the finish line.

As Wightman crossed for gold, becoming the first Briton to win the 1,500m in 39 years, since Steve Cram’s victory in 1983, the camera panned to mum Susan who, with a Great British flag in her hands, races up to the box to celebrate with her husband.

The viral clip was viewed more than 230,000 times on Twitter with the clip ending with commentator dad Geoff with his head in his hands on his desk, speechless at having seen his son win gold. 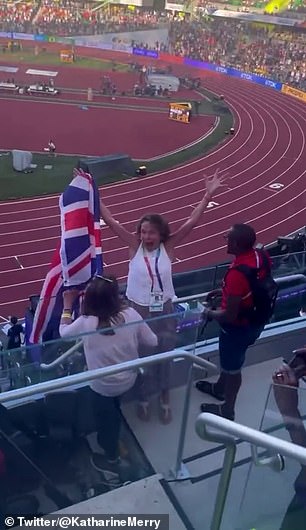 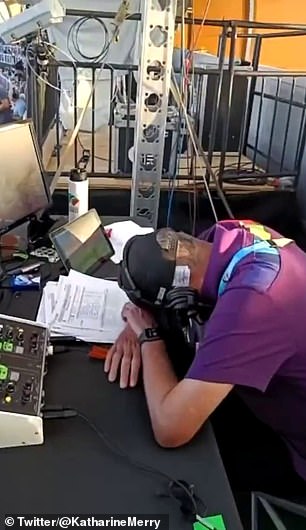 ‘I’ve been doing his school sports day since he was about 11 because my wife’s been his PE teacher,’ said Wightman senior.

‘I’ve been watching his races for all his life, since he started as a little kid in primary school and to come through and win a global title here of all places. The main thing is it made up for the Olympics.

‘You only get one shot in four years. So I’m, very proud, very proud. He’s putting in a lot of hard work. He’s very meticulous in the way he prepares.’

He also underlined the need to be unbiased when announcing the runners and calling the race.

‘We had some good 200m semi-finals, you just get into a certain groove. But each time, I’d think ‘he’ll be warming up now, he’ll be into the final callroom.’ 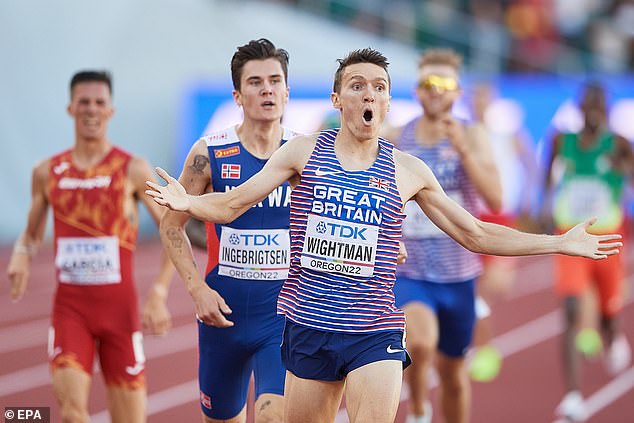 Wightman won in three minutes 29.23 seconds in what is the biggest result of his career 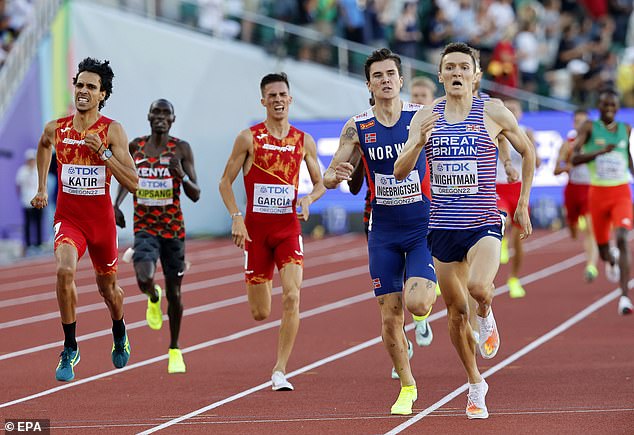 Asked about his dad’s calling of his races, Wightman laughed: ‘Dad can be a bit of a robot on the mic sometimes, some people say robot some say professional.

‘I hope he broke that down today. It will be interesting to watch it back. My mum was in tears, at least someone was crying.

‘I didn’t hear him, hopefully that’s because he was a bit emotional. One of the first things he said was “get ready for Commies (Commonwealth Games) now”.

‘I’m 28 now, I don’t know how many more opportunities I will get to do this and I hope there is a lot more to come. I need to make the most of it. It’s important to hit the milestone like this, seven, eight-year-old me would never have believed.

‘There are so many people who have helped me get to this point. My dad has coached me since I was 14 or 15. Every club coach from Edinburgh, Loughborough Uni, British Athletics have all played a part. The main thing is to now thank everyone who has helped me.’ 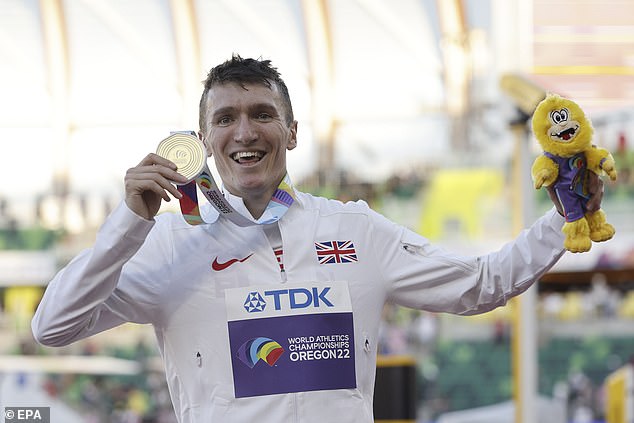 Wightman was already the fastest man this year and went for the win with 200m to go.

Ingebrigtsen was unable to react and Wightman held on to take the biggest win of his career. World Athletics then moved the medal ceremony forward to Tuesday evening because the original one clashed with his flight home on Wednesday.

‘I didn’t want to leave this race like in Tokyo (2020 Olympics) where I didn’t give a true account of how I want to run and how I believe I could run,’ he said.

‘The important thing was to be at 200m strong. I thought ‘screw this, I’m going to give it a go’. If I ended up finishing fourth, I gave it a go. If I had finished second or third I’d given it a go to try and win. But I held on.

‘Whatever happens in the rest of my career, I’m a world champion.’

Wightman has previously won European and Commonwealth bronze and only came 10th at last year’s Olympics in Tokyo.

‘The main thing of Tokyo was it was way more disappointing than people realise,’ he said. 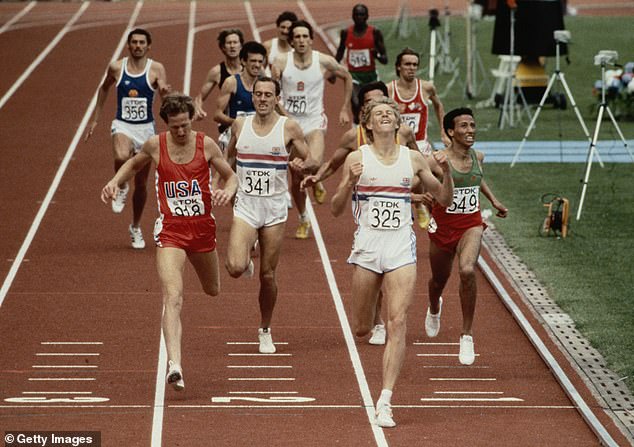 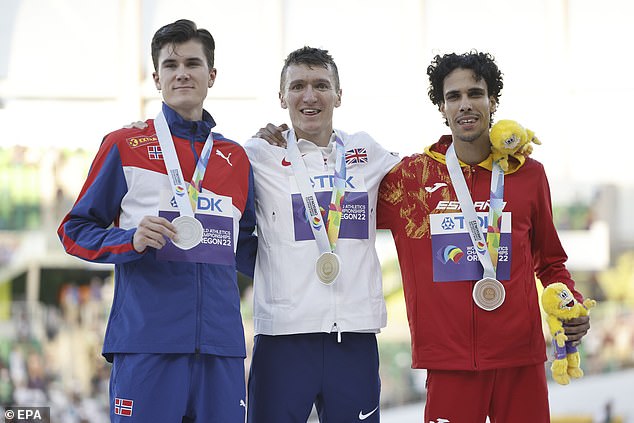 ‘I’m not a negative person but I felt pretty scarred by it. It was a real disappointing end to something which I thought was building up to be really special.

‘That haunted me for a while. There were a lot of gaps which I realised needed filling, not just from the summer but the whole winter.

‘We made those changes to come into these champs in a much better position.’

Wightman’s team-mate Josh Kerr tried to set the tone ahead of the final by winning his semi-final.

But the 24-year-old was unable to threaten the medal positions and missed out on being able to add to last year’s Olympic bronze to finish fifth.