St Kilda are planning to simplify their game style in order to turn their fortunes around following a tumultuous 2018 season.

The Saints had their sights firmly on finals action this year but could only manage four wins, including a disastrous 11-game stretch without a victory. 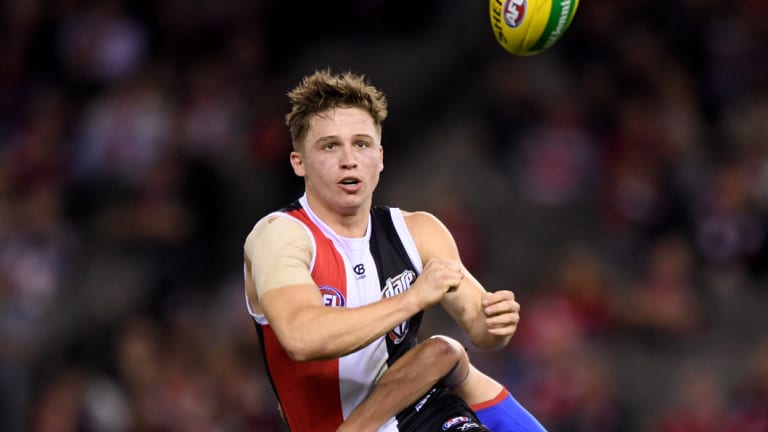 Jack Billings and the Saints are planning to keep things simple in 2019.Credit:AAP

However, emerging Saint Jack Billings says he’s already seen "a lot of improvement across the list".

"When we got back 'Richo' [Alan Richardson] quickly touched on what happened [this season] and then we quickly moved forward," Billings said.

"We want to make some changes about the way we play and our game plan, so the last three weeks have been about learning that sort of stuff and trying to put it in place and train it over the next two or three months and hopefully be better next year."

Billings and his teammates trained through torrential rain on Thursday morning, with running drills the main feature.

The 23-year-old says training standards are "a lot higher now" coming off a tough year.

"We’ve had Brett Ratten [Hawthorn] and Brendon Lade [Port Adelaide] in particular come in from good programs so they’ve had an impact in terms of little changes we’ve made," he said.

"I think overall the changes are going to be better for the team, a bit more simple with the way we do things and more predictable to each other, the coaches have really driven that and Richo’s pretty excited about it all."

A major catalyst for the rising internal expectations is former Swan Dan Hannebery, who moved to St Kilda in the offseason following a decade at Sydney which included the 2012 premiership.

Hannebery has looked sharp at training according to Billings, who is an integral part of the younger group the All-Australian midfielder is aspiring to develop.

"He’s been awesome, 'Hanners,' so far. He’s obviously coming from a successful program, he’s won a flag so he knows what it takes," Billings said.

"He’s a bull out of a gate which is awesome to have around the club, there’ll be a lot of talk about his performance on the field but I think the biggest impact he’ll have next year will be stuff that you can’t really see, his impact on the guys around him.

"It’s really exciting only a few weeks in what he’s been able to do for the group and I’m looking forward to playing with him as well."

Making a name for himself as a crafty half-forward early in his career, Billings is now looking to play more permanently as a midfielder.

The skilful left-footer says his ability to play up forward or in the middle is a strength of his game, but is aiming to impress the coaching staff enough over the preseason to cement himself as an on-baller.

"I still like playing forward as well so it’s obviously going to be a bit of both but I think I can really help through the midfield," Billings said.

"I’m going to have to work really hard over the summer and show Richo and the coaches that I need to spend more time there and help the side."

Billings says he isn’t concerned about contract talks, though the young gun’s current deal at Moorabbin expires following the 2019 season.

"I’m just focusing on getting my body right and getting as fit and strong as I can and improving my game, honestly that’s what you think about," he said.

"Obviously I love the club and am going to give it my best and look forward to next year so when the time comes I’ll work things out."