It was as inevitable as it was unthinkable.

When Roger Federer walked off the court after his five-set loss to Grigor Dimitrov at Flushing Meadow in the quarter-finals of the US Open earlier this month it didn't take long for some pundits and fans to speculate about whether this was the beginning of the end. 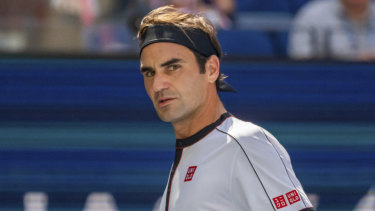 Roger Federer at the US Open in August.Credit:Invision

After all, the great Swiss champion is now 38. He hasn't won a grand slam tournament this year and has had to look on as his arch-rivals Rafael Nadal and Novak Djokovic have split the Australian, French, Wimbledon and US titles between them.

If he can't beat a trier like Dimitrov, the argument went, what is the point? If Federer cannot be his majestic, imperial best, dispatching opponents with his rapier volleys and fluid backhand, why should he carry on into sporting dotage?

It's an argument we hear often.

It goes something like this: if a player is a champion, he or she is sullying their reputation and achievements by continuing into the sporting equivalent of the twilight zone where he or she is relying on muscle memory and sporting smarts to stay relevant.

Better by far to quit at the top and enjoy your legacy, basking in the glow of fan acclamation and adulation rather than block the progress of a younger teammate.

To which I would say hogwash.

What on earth is wrong with top performers carrying on well past their brilliant best – if they are still competitive, can still please the crowds and if they can offer their team or their sport an edge?

You are a long time dead, goes the old saying, and given the relative brevity of life in the sporting fast lane many of the top practitioners in a vast number of sports are taking this view.

We should celebrate the golden oldies and applaud their tenacity, durability and sheer ability to stay in the game at an age when their predecessors were putting their feet up.

We should hold off pointing to their birth certificate whenever they have a bad game or two, or a run of outs and nod sagely suggesting that Father Time has caught up with them.

But who can blame anyone touring the world, earning huge wages and doing something they love – at a still very high level – for raging against the dwindling light. 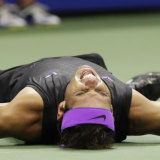 Older doesn’t mean out as Rafael Nadal proved, winning the US Open. Credit:AP

Federer is not the only veteran in tennis. Nadal is approaching that stage at 33, while Djokovic is only a year behind him. Andy Murray, the injured member of that sport's big four is, like Djokovic, 32.

But it's not only tennis where older men and women – don't forget that the dominator Serena Williams, will be 38 later this month –  are defying their birth certificates.

The spring racing carnival is upon us and the jockey ranks, while constantly evolving, contain one certainty: that Damien Oliver will be amongst the big race winners.

Oliver is now 47, but earlier this month collected his 10th Scobie Breasley Medal as the outstanding rider of the 2018-19 season.

He is not alone. In Sydney Glen Boss, the man who rode Makybe Diva to three Melbourne Cup triumphs, is still riding at the highest level past his 50th birthday. Victorian champion rider Craig Williams will be 42 in October and Winx's regular jockey Hugh Bowman turned 39 in July.
Overseas the man who is probably the best known rider in the world, Frankie Dettori, is close to 50.

In the AFL, Shaun Burgoyne will be 37 next month but he has inked a new deal with Hawthorn.

Luke Hodge has been an inspirational part of the Brisbane Lions' revival at the age of 35, while in the women's code several standout players, such as Adelaide champion Erin Phillips (34), are into their fourth decade. Collingwood AFLW player Cecilia McIntosh is, at 40,  showing that older women can still perform at elite level.

Athletes nowadays know much more about diet, the importance of rest, specific training schedules and how to use – and respect – their body's strengths and limitations.

But much of the drive for these older elite athletes to compete into their sporting dotage is pyschological, as sports psychologist Phil Jauncey explains.

''If the players self esteem and self acceptance leads them to believe that they can still compete at a high level then they will. The time to stop is when you decide you don't want to be here," he says.

''Players change and adapt their game, their tactics, their style and their role. Their self esteem is a major factor. If they believe they are executing their skills to a high level they are not thinking so much about winning or losing but of performing at their best.''

And that is the key. Merlene Ottey, the former great Jamaican sprinter who competed in seven Olympic Games, was clearly not at her peak when she ran in the 2012 European championships at the age of 52.  But she was still good enough to qualify ahead of much younger rivals.

Good on her. And to all the "oldies'' who continue to impress at the best level they can.