Cameron Smith will lead Melbourne into the 2019 NRL season – and put himself on track to become the first player to reach 400 games – after the club announced his long-awaited re-signing on a two-year extension on Wednesday.

Smith returned to training this week after an extended break and the club had been preparing for a media conference on Thursday to end months of uncertainty surrounding the ex-Australian captain’s future. 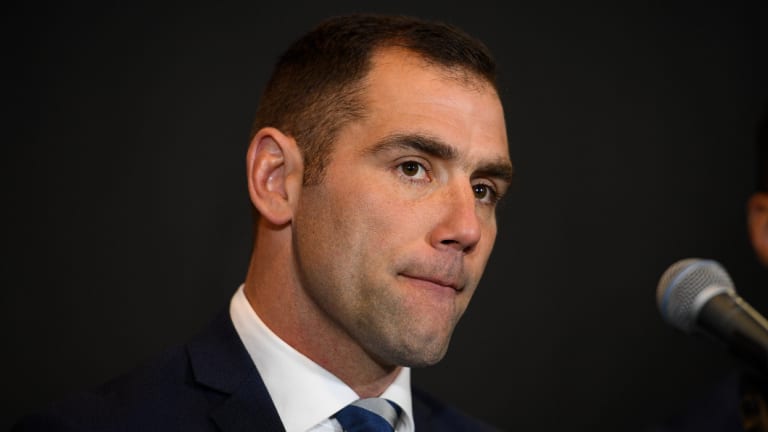 2020 vision: Cameron Smith has extended his time with the Storm for another two years.Credit:AAP

It is believed that 35-year-old Smith wanted a two-year deal but the club preferred a one-year contract, contributing to the delay. He has also travelled extensively during the break, spending time overseas and in far north Queensland.

‘‘I’m very happy to be continuing my career with the club that gave me an opportunity to play first grade rugby league,’’ Smith told NRL.com. ‘‘With Bill Slater and Ryan Hoffman retiring last season, I want to give Craig [Bellamy] and the coaching staff all the support they need, particularly with so much talent coming through.’’

Preparing for his 18th season – all with the same club – Smith is set to become the first player to play 400 NRL games. He is currently on a record 384 games. Turning 36 in June, Smith is the second-oldest player in the competition behind Cronulla’s Paul Gallen.

Club CEO Dave Donaghy said: ‘‘Cameron made it clear to us through the season he wanted to play on in 2019 but he saw it was more important to secure the future for the likes of Cameron Munster before him,’’ Donaghy said. ‘‘Being a one-club player is rare in footy these days and it’s a credit to Cameron for sticking with us.’’

Smith only missed one Storm match last season, having retired from representative football, and coach Craig Bellamy was vocal about his importance to the club, particularly with superstar fullback Slater retiring after the 2018 grand final defeat.