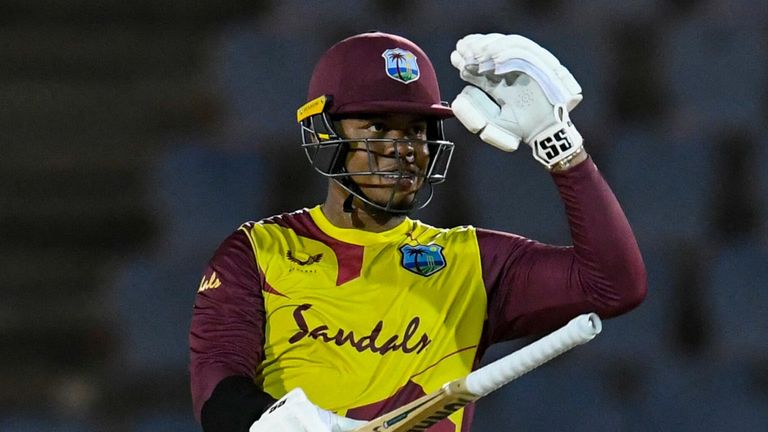 Shimron Hetmyer blasted 61 off 36 balls as the West Indies hammered Australia by 56 runs in the second T20 international in St Lucia on Saturday, taking a 2-0 lead in the five-match series.

Australia’s Mitchell Marsh struck his second half-century in as many matches with a steady 54 from 42 deliveries, but a batting collapse similar to the one they suffered in the opening game meant the visitors were bowled out for 140 in 19.2 overs when chasing 197. It’s the first time since 2010 that Australia have lost all 10 wickets in consecutive T20 matches.

Asked to bat first by Australia, the hosts got off to a solid start with 46 runs in the six-over powerplay, as opening batsman Lendl Simmons (30 off 21) blasted three sixes before man-of-the-match Hetmyer took over.

Hetmyer was the aggressor with four sixes and two boundaries as he stitched together a 103-run partnership with Dwayne Bravo, who cleared the ropes three times himself in an unbeaten 47 from 34 balls.

Andre Russell added 24 off eight deliveries after Hetmyer was run out, with the West Indies adding 123 runs in the last 10 overs to post a massive 196-4 on a good batting wicket.

Australia lost both openers inside the opening four overs and, barring Marsh, failed to rise to the occasion. West Indies legspinner Hayden Walsh claimed 3-29 from his four overs, while left-arm paceman Sheldon Cottrell returned figures of 2-22.

The third T20 of the series will be held at the same venue on Monday, with the home side eyeing up clinching a series win with two games to play.