Based on the first five weeks of the season, the New Orleans Saints aren’t the same powerhouse they have been the past few years.

But Drew Brees is still capable of some clutch moments. So is Marshon Lattimore.

Brees led a go-ahead drive to start overtime on Monday night to help steal a game over the Los Angeles Chargers that they trailed 20-3 at one point. Wil Lutz kicked a field goal to give the Saints a 30-27 lead on the first possession of overtime. The Chargers’ drive and the game ended when Mike Williams caught a fourth-down pass but was stopped just short of a first down by Lattimore, and the Saints escaped with a win.

Everything seems to be a struggle for the Saints this season. The Saints losing at home to a rookie quarterback on a 1-3 team was unthinkable the past few years, and the Chargers came close to pulling it off.

Being 3-2 helps as the Saints try to figure out if they still have a championship run in them.

Game goes back and forth in fourth quarter

The Chargers came in with a long injury list, including two key offensive linemen and running back Austin Ekeler. It got worse in the first half when star receiver Keenan Allen was knocked out of the game with an injury.

Even with that battered roster, the Chargers outplayed the Saints for most of the game.

The Saints have excuses. They were without Michael Thomas, one of the league’s best players. Thomas has been out with an injury and was deactivated after fighting a teammate in practice last week. Maybe Thomas’ return, and the return of some other injured players, will change how the Saints look, particularly on offense. But it has been a slog for plenty of the season.

Still, they made some plays late. The Saints seemed on the verge of squeezing out a win in regulation when Brees threw it deep to Jared Cook on third-and-14 for a 41-yard touchdown with 11:21 left. That tied the game 20-20. And then again on Taysom Hill’s touchdown run with 52 seconds left after a great sideline catch by Alvin Kamara.

But the Chargers wouldn’t go away. After Cook’s touchdown, Williams blew past cornerback Patrick Robinson down the right sideline. Herbert has the arm to deliver it deep, and Williams was wide open for a touchdown. After Hill scored in the final minute, Herbert hit Williams for a phenomenal catch in traffic with eight seconds left to set up a winning field goal attempt.

The Chargers rarely catch any breaks, and the Saints got lucky. Michael Badgley’s 50-yard field goal attempt as time expired hit the right upright and the game went to overtime. 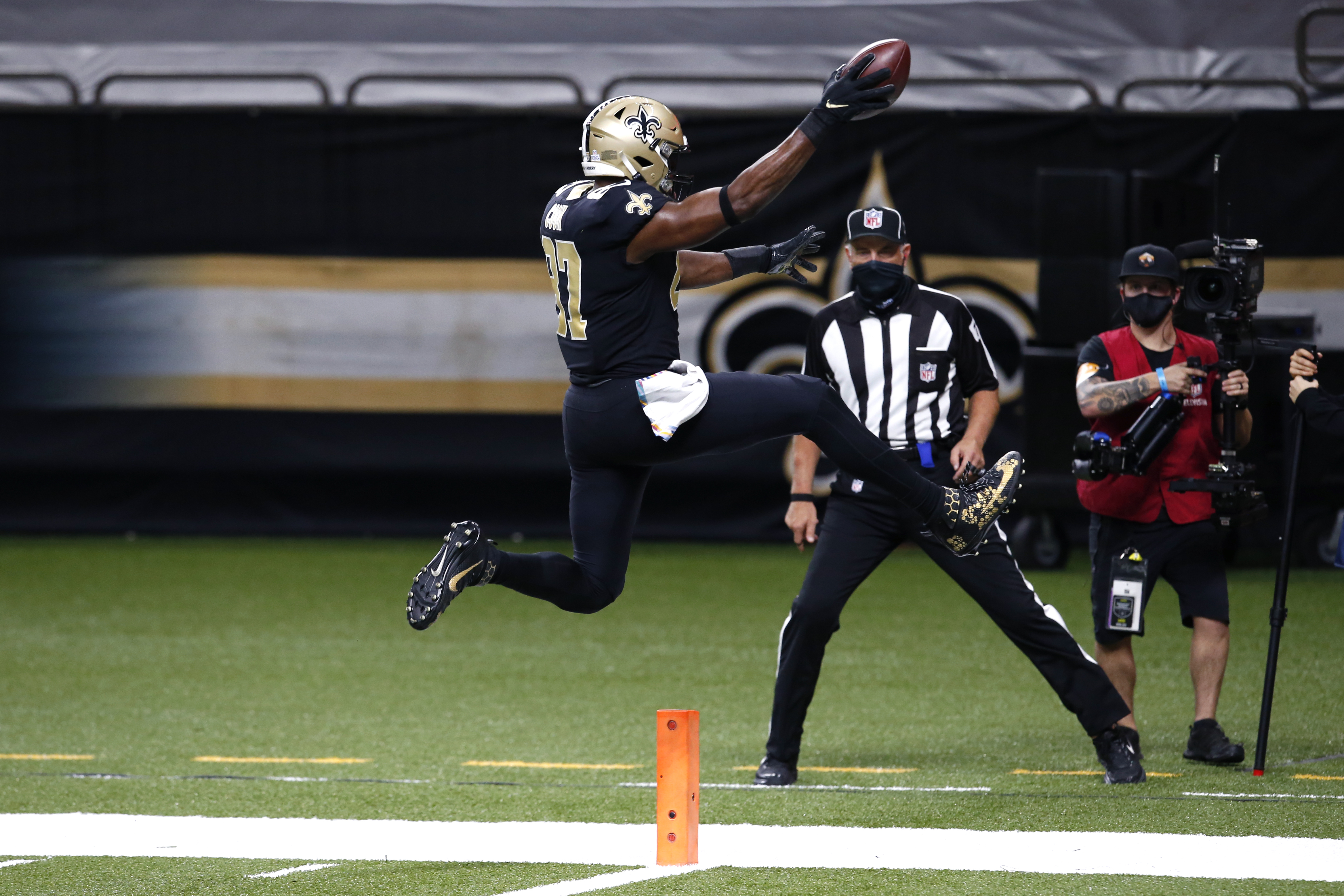 The Chargers offense was great in the first half. Herbert threw three touchdowns before halftime. The Chargers looked like they might blow out the Saints. They were up 20-3 in the second quarter.

The Saints scored late in the first half, then the Chargers stopped moving the ball for a long stretch. Without Allen, nothing worked on offense. Still, Herbert hit one big play to Williams to take back the lead. Herbert put the Chargers in a position to win on a field goal with another long pass to Williams in the final seconds of regulation. Herbert was very good most of the game, and it looks like the Chargers have their quarterback of the future.

Still, the Chargers find ways to lose close games. The Saints got the ball first in overtime. Brees has been in this situation many times before, and he calmly led the Saints into Chargers territory. That led to Lutz’s field goal and the lead with a little more than five minutes left.

The Saints finally got the one stop they needed. Lattimore gives up a lot of size to Williams but wrestled him down just short of a first down that would have extended the game. It was a great play by one of the Saints’ stars when they needed it most.

The Saints aren’t dominating anyone this season. But at least they came out of Monday night with a win in a game they came so close to losing.

Charger rookie quarterback and first round draft pick Drew Brees watches the action from the sidelines during the season opener against the Redskins in San Diego on Sept.9, 2001. The Chargers won 30ï¿½3.(Photo by Vince Compagnone/Los Angeles Times via Getty Images)

28 Sept 2003: Drew Brees of the San Diego Chargers during Chargers 34-31 loss to the Oakland Raiders at Network Associates Coliseum in Oakland, CA.(Photo by Dilip Vishwanat/Sporting News via Getty Images)

KANSAS CITY, MO – DECEMBER 24:Jimmy Wilkerson #96 of the Kansas City Chiefs reaches for Drew Brees #9 of the San Diego Chargers as he runs the ball in the first half of the game on December 24, 2005 at Arrowhead Stadium in Kansas City, Missouri. (Photo by Larry W. Smith/Getty Images)

New Orleans quarterback Drew Brees during the first half of the Saints 23-3 win over Atlanta Monday, September 25, 2006, at the Superdome in New Orleans, Louisiana. (Photo by Kevin C.Cox/Getty Images)

BALTIMORE – DECEMBER 19: Drew Brees #9 of the New Orleans Saints looks on from the sidelines against the Baltimore Ravens on December 19, 2010 at M&T Bank Stadium in Baltimore, Maryland.The Ravens defeated the Saints 30 to 24. (Photo by: Rob Tringali/SportsChrome/Getty Images)

NEW ORLEANS, LA – JANUARY 07:Drew Brees #9 of the New Orleans Saints reacts after throwing a touchdown pass against the Carolina Panthers at the Mercedes-Benz Superdome on January 7, 2018 in New Orleans, Louisiana.(Photo by Chris Graythen/Getty Images)Up Next