EDDIE JONES told his England stars to party like it’s 2011 after this brutal win.

Referring   to the boozed-up dwarf throwing at the World Cup eight years ago, Jones joked this weekend would be just as crazy after his side smashed America. 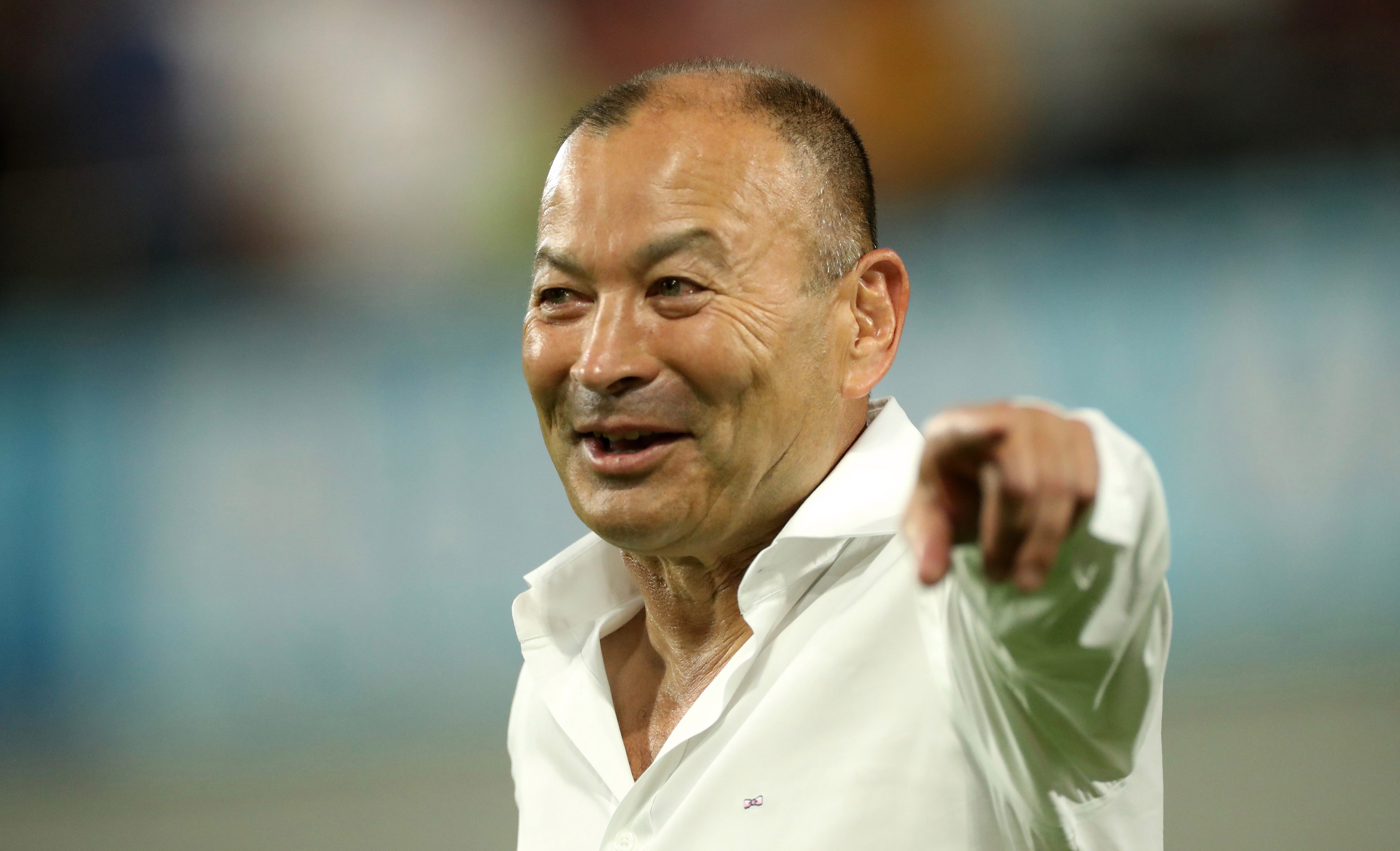 He even said that Manu Tuilagi could recreate one of his most controversial moments when he jumped off a boat into Auckland harbour in New Zealand.

England have two days off to relax and make the most of Japan before meeting up again on Sunday to get the bullet train to Tokyo.

And mischievous Jones said: “They’re free. Free to jump off boats in harbours, throw things around, anything. They’re free.

“If they want to go somewhere else they can. We’re giving them a break. They can spend time with their families.”

In the city famous for the best wagyu meat in the world, England’s prime cuts out-muscled the USA with a seven-try smashing.

Fans expected a thumping and another five-pointer — and they got it, with another brace from giant winger Joe Cokanasiga.

It will not live long in the memory but it was job done, with no major injuries and only a possible citing for back-up centre Piers Francis to worry about. 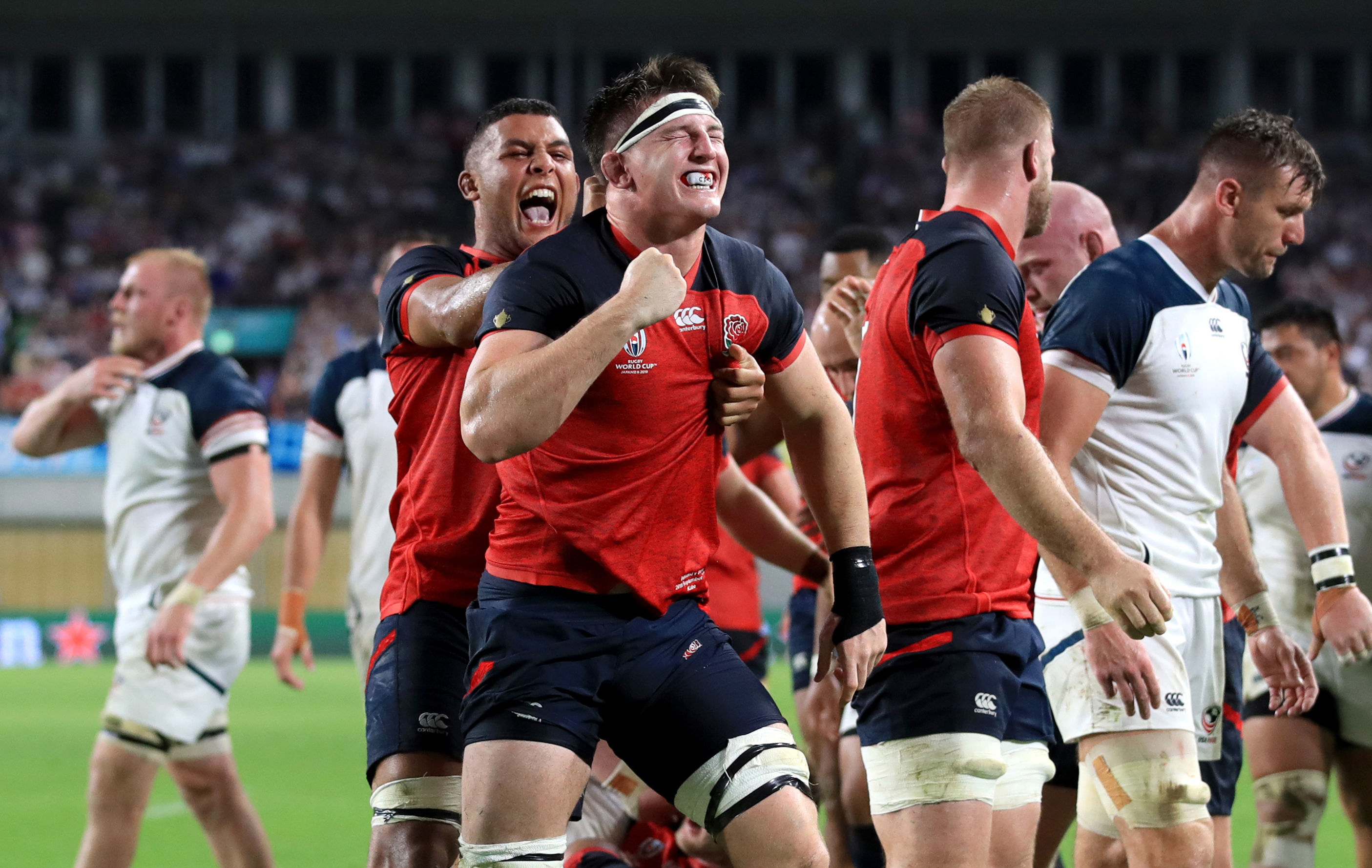 Jones said: “That’s stage one of the tournament done.

“We move into stage two now which is Argentina, then we’ve got stage three, four and five. It’s like the Tour de France.

“Points wise, we’re in a great position. We’ve got all the points we can get and we’ve got a great ‘for and against’. And we’ve got no injuries. It’s remarkable.

“We could conceivably have 31 players available to select next week.”

It was men against boys at times in the sweltering Misaki Stadium.

The Eagles were schooled from the off and lost rookie prop David Ainu’u to a nasty knee injury after less than three minutes.

The 19-year-old was monstered in the first scrum of the game and it set the tone for England’s total dominance. In 2019 alone they have won 51 of the 52 scrums on their own feeds — losing just one against Wales.

Admittedly, USA were a shambles at the set-piece and their front row often folded like deck-chairs.

Eagles boss Gary Gold said: “We let ourselves down badly.

“I’m proud the guys didn’t roll over but we were taught some lessons and lost every aspect of the game. That’s what happens when you play against world-class teams, they punish you.

“We had a calamity. I’m hurting but I know the players are hurting even more. We will be better.”

George Ford was England’s captain fantastic and the fly-half ran, kicked and passed at the right moments.

The Leicester Tigers general also opened the scoring when he spotted a gap and drifted through the Eagles’ midfield to score under the posts.

Alongside Ford’s class was the brutality of Cokanasiga, who steamrollered USA captain Blaine Scully as the boys from across the pond had to soak up endless pressure. 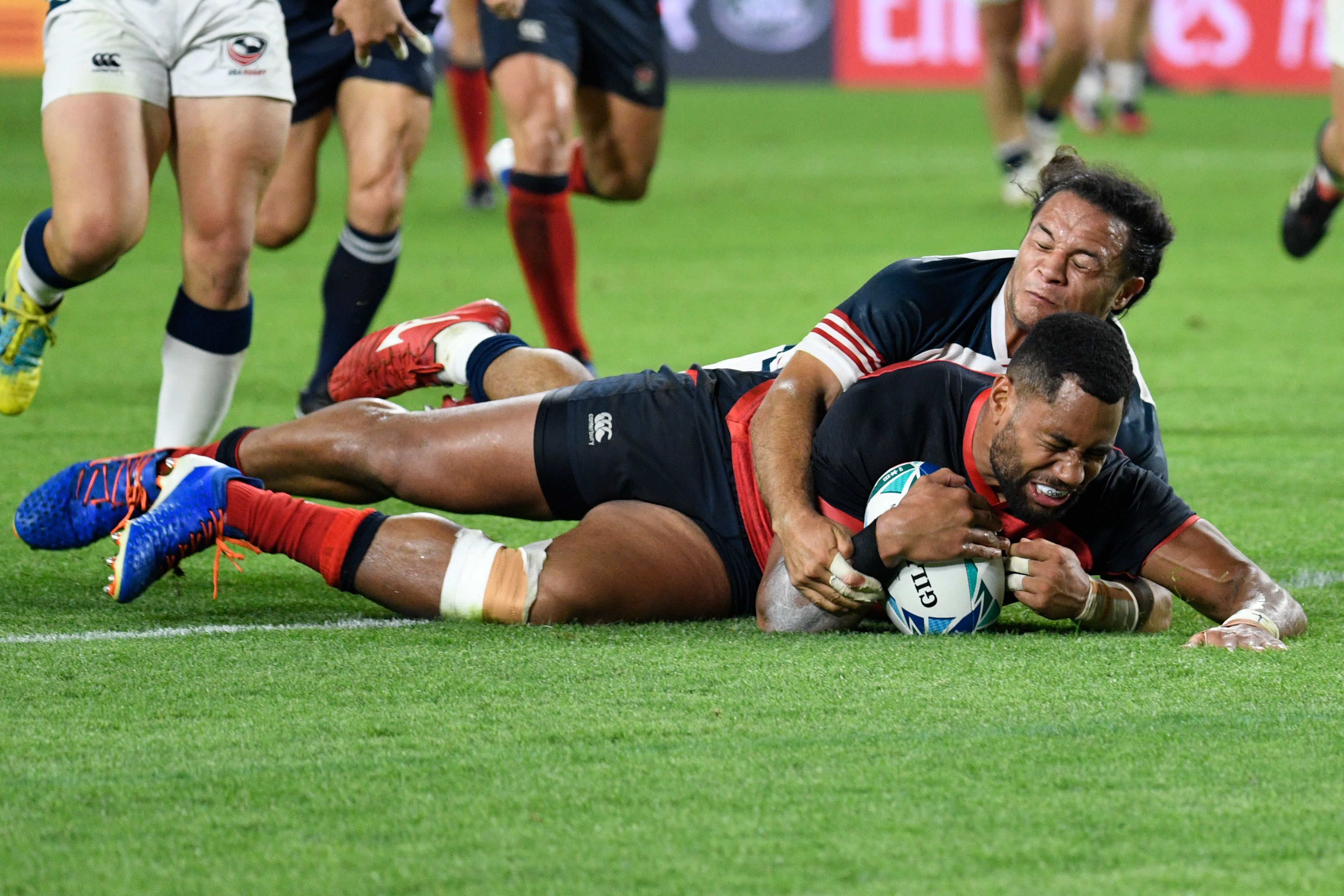 England were patient and, from a penalty, Ford stuck it in the 22 and Billy Vunipola smashed his way over from a ruthless driving maul.

The same move brought up Luke Cowan-Dickie’s fourth try in six Tests — but this time almost the whole XV piled in on the action.

Cokanasiga showed his power for his first try, then his pace and strength for his second, with the Americans constantly pinned in their own half as England had 70 per cent possession.

Off the bench, Ellis Genge and Kyle Sinckler absolutely ripped into South African Gold’s side and showed them no mercy.

Ex-Team GB Sevens star Ruaridh McConnochie also got on the scoresheet on his World Cup debut, showing the composure to finish down the five-metre channel before Lewis Ludlam ran in No 6.

The game turned ugly when USA flanker John Quill became the 18th player in tournament history to be red-carded after smashing into Owen Farrell’s head. 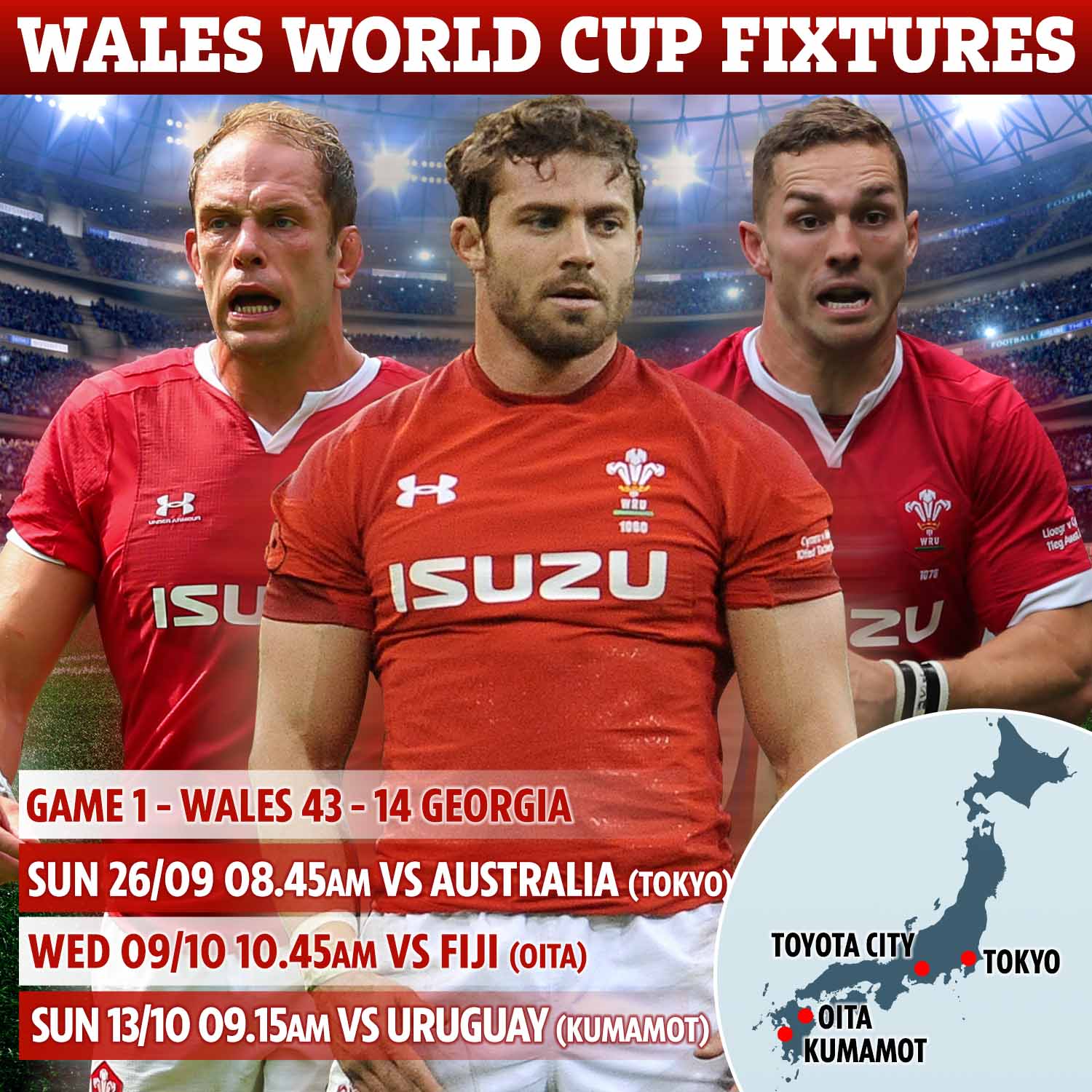 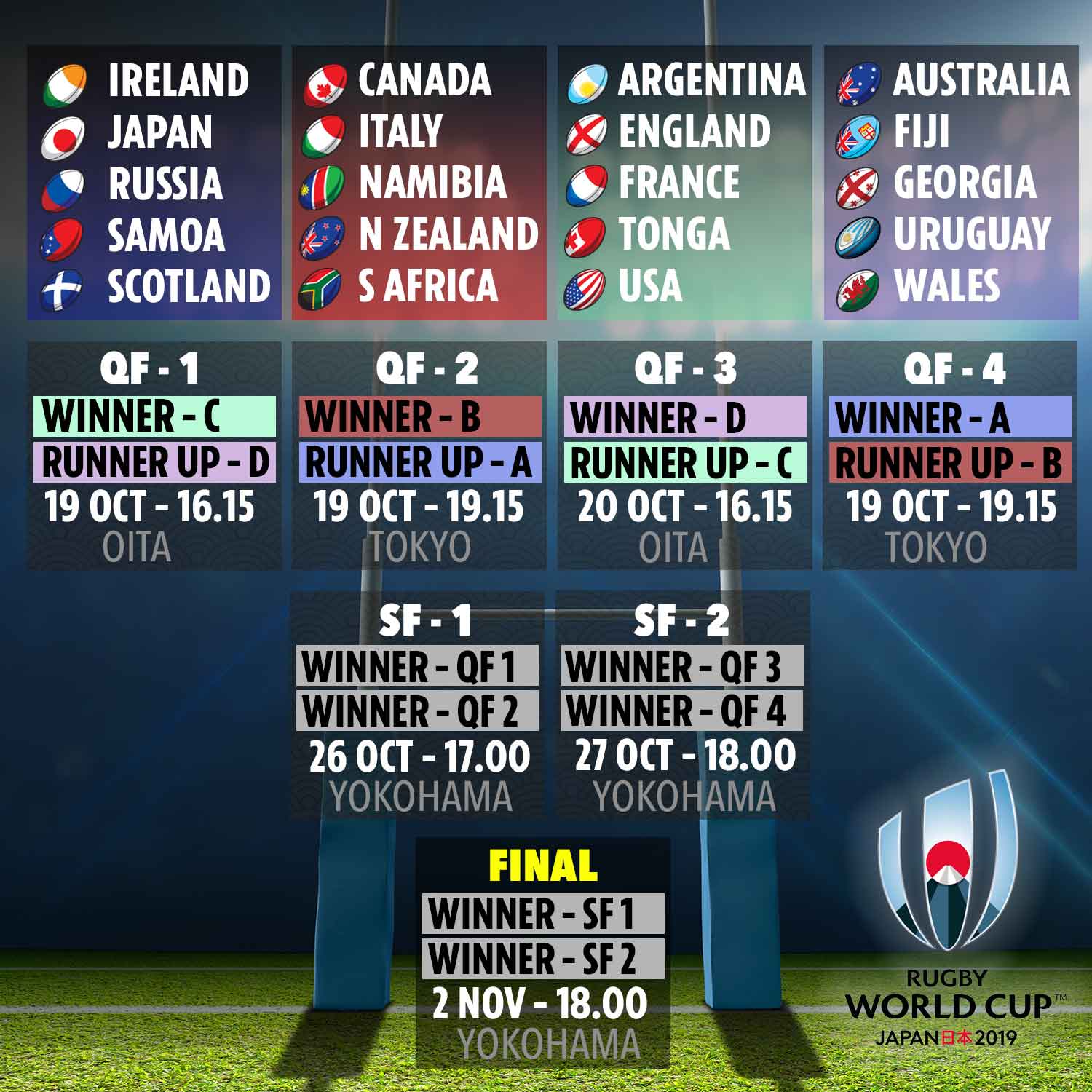 Credit to USA, though, for not giving up despite being a man down.

They even managed to score through Bryce Campbell in the last play after England decided to run the ball instead of kicking it dead.

For England, the World Cup starts now, with the serious work of Argentina in Tokyo a week tomorrow.