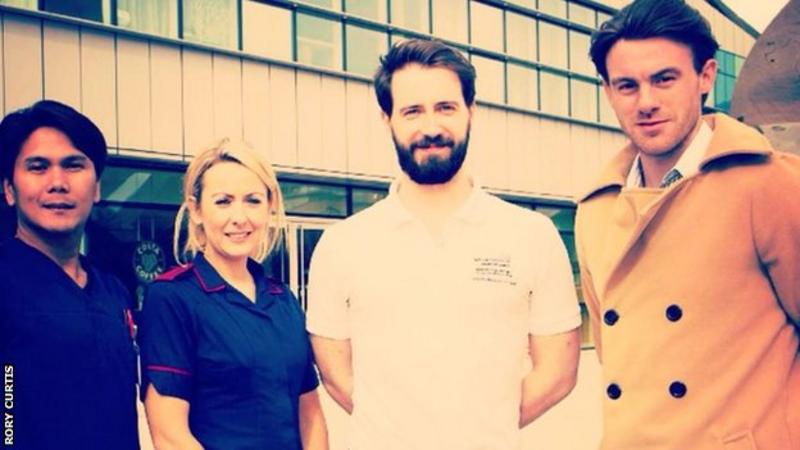 When Rory Curtis awoke from his coma, he didn’t know where he was. He didn’t know how he had got there. He couldn’t remember his past as a promising teenage striker at Manchester United’s academy; nor the slow demise of his football career; nor the crash that had left him with a shattered hip, a broken elbow, a multifocal intracranial haemorrhage and a diffused brain injury.

When his eyes blinked open and he began to speak, fluent French poured out, a language he had only studied in school, all of which had long since been forgotten.

He spoke so fluidly, with such perfect intonation, that the nurse attending to him, a native French speaker, asked his father which part of France Curtis was from. His Gallic tongue lasted only as long as that initial conversation, though. Like the memory of a dream, his ability to speak French quickly vanished.

“Hearing that, my dad did his research,” Curtis says, “and the Curtis family originates from Normandy, but that was in the 1800s. If you look on YouTube and type my name in, there are a lot of conspiracy theories, thinking the brain can hold on to knowledge of generations. Crazy.”

The crash happened on a rain-sodden afternoon in August 2014. Curtis, 22 years old at the time, was on an errand for a construction company he had begun to work for alongside playing football semi-professionally and studying for a degree in sports science and psychology. He has no recollection of the accident and how it occurred, but witness reports allowed a piecing together of what happened. Curtis, returning from a merchant’s yard, was changing lanes through the shower and spray on the M42 motorway near Tamworth when his Transit van collided with the side of an articulated lorry. His vehicle bore the brunt of a six-car pile-up. No one else was seriously injured.

Trapped in the wreckage, it took firefighters 40 minutes to free Curtis. His injuries were so severe that he was put into an induced coma at the scene and airlifted to the Queen Elizabeth Hospital in Birmingham, where he remained comatose for six days. Once his condition was stabilised, he was moved to the nearby Mosely Hall Hospital, which offers specialist care in brain injury rehabilitation, to begin what it was thought would be a long, arduous and only partial recovery.

It was unlikely he’d ever walk or talk properly again, his family were advised.

Curtis had confounded medical prognosis before. When he was seven, he was diagnosed with meningitis septicaemia. His chances of survival were rated 50-50. After six weeks on the meningitis ward at the Birmingham Children’s Hospital, he was discharged to continue his recovery at home. The only after-effect he suffered was a slight and temporary deterioration of his eyesight. “I was the only child there who didn’t lose a limb,” Curtis says. “But the only thing that happened to me was I had to wear glasses for a year. They couldn’t believe that.”

His recovery was so comprehensive that he soon began to stand out as an athletic prospect. Born into a family of ardent Birmingham City supporters, he would emulate his St Andrew’s heroes on the playing fields of Redditch, where he grew up.

Curtis was invited to train with Birmingham age 11 but was put off by the experience and didn’t return. At 13, while impressing as a striker with local side Central Ajax in a seven-a-side tournament, he caught the eye of a Manchester United scout and began to travel to the 20-time champions’ Carrington academy every school holiday. 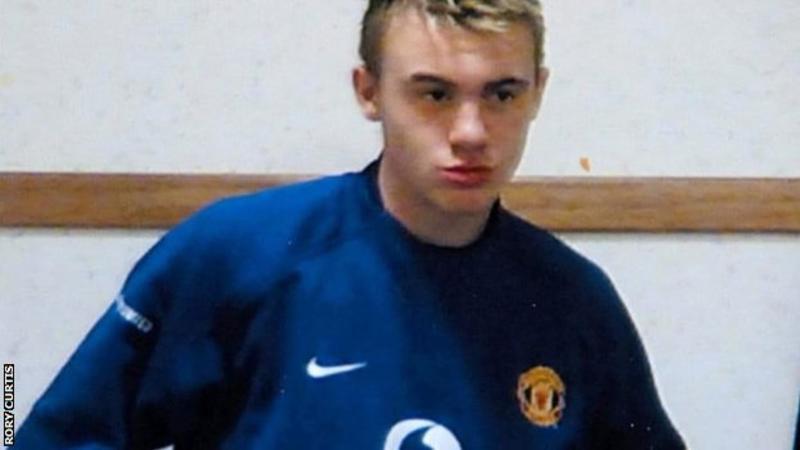 When Curtis expressed that he didn’t yet feel ready to leave his parents and friends to move up to Manchester, an agreement was struck between United and Walsall which allowed the teenager to join the Midlands club’s academy, with United retaining an option to take him back north.

At the end of his first season with Walsall, Curtis was due to join up with United’s youngsters for a European tour, but a bout of Sever’s disease – a painful inflammation of the heel common among adolescents – scuppered plans. Later, a surreptitious trial with Newcastle was arranged by Curtis’s agent, the late former England striker Cyrille Regis, unbeknown to Walsall and Manchester United. ‘They wanted me to go back for another two to three weeks, but I couldn’t say I was sick for any longer than a week. I was putting in a sick note,” Curtis says.

But injury again slammed the door when opportunity knocked.

With the reserve team short of strikers, Deeney was instead promoted, grasping his chance as a springboard to the first team. “It’s all about timing, football. Right place, right time,” Curtis sighs. “I would have got my chance. I can’t say I’d be where Troy is now, but we would both have got our chances.”

As time wore on, Curtis became disenchanted with the game. He signed professional terms with Walsall at 18, for £150 a week, but had already begun to feel his enthusiasm wane.

“I kind of fell out of love with football.”

He didn’t give up entirely, though. His next few years were spent bouncing around the semi-professional clubs of the West Midlands – Stourbridge, Stourport, Evesham, Rugby, Halesowen, Willenhall – as he studied at Newman College in Birmingham and later completed strength-and-conditioning qualifications, his chosen next career step. “I was a bit of a cocky striker,” Curtis admits. “If I wasn’t playing and I didn’t have a good reason why, I’d go somewhere else.”

Playing for Stourport Swifts and having to leave the field with a lower-back injury is the last thing Curtis remembers before the crash. A fractured coccyx showed up on the post-accident x-rays.

In addition to his inexplicable fluency in French, another of the early phenomena Curtis experienced in the immediate aftermath of his accident was age regression. He was convinced he was 10 years old again and would ask his mother about the family dog, only to be informed the dog had died years ago.

That realisation would kick his psychological age forward a couple more years, until another trigger again brought him closer to the present. “The second she said that, I put two and two together,” Curtis remembers. “I was thinking, ‘Oh, yeah. What am I on about?’ And then I would think I was 12. It was tying the knots together in my brain, in my memory.”

He also, for a time, became convinced he was Hollywood actor Matthew McConaughey, and would lie in his hospital bed agitating to get back to filming his next blockbuster. “Because I had a broken arm and a broken hip, I had to go to the loo with my mum,” Curtis says, “and I remember looking in the mirror and not realising who I was looking at.”

Curtis was discharged from hospital in November 2012, wheelchair-bound and with his short-term memory so decimated that he was required to write his every move in a diary at 15-minute intervals, reminding himself, for example, that he had already showered for the day or eaten lunch. “I probably filled out two diary books,” he says.

Despite initially being cautioned that a return to total mobility and complete brain function was improbable, and that simple tasks such as dressing himself might be beyond his capability, Curtis made a full recovery within a year. And, incredibly, he was back playing semi-professional football with Stourport during the 2013-14 season.

“I can’t remember how soon I was walking,” Curtis says, “but [the doctors] were in shock. And they were shocked that I didn’t have a limp as well.

“They advised against playing football because they said I shouldn’t have any hard hits to the head. In my first game, I took an elbow to the face and my dad nearly jumped on to the pitch.”

In the days after his crash, Curtis became just the second person in Britain to receive an experimental hormone treatment which, it was believed, could be highly effective in aiding recovery from traumatic brain injuries. As part of a United States-led study entitled Synapse, Curtis was administered progesterone, a female steroid hormone, and his progress was tracked every three months. In the years since, Curtis and his family have credited much of his miraculous recovery to the radical treatment he received.

“Unfortunately that drug was not effective – no difference with placebo,” says Dr Antonio Belli, the neurologist who oversaw Curtis’s recovery. “Rory would have done so well thanks to his genes and fitness, probably.”

Although it was remarkable that Curtis was able to return to football at all, he still had high expectations of himself and struggled to reconcile with the fact his first touch was no longer immaculate, and that his pace, his other primary asset, had slowed half a stride.

“I was a bit of a perfectionist,” he says. “If it wasn’t there, I was my own worst enemy. It affects your confidence as well, if you have a bad touch. It helped with the decision to knock it on the head.”

The decision to quit football was taken out of his hands by the new career Curtis began to pursue. He had grown frustrated with the lack of opportunities in the strength-and-conditioning field, and the crash had not only given him a renewed appreciation of his family, who had been dedicated aides in his recovery, but also of the family business. 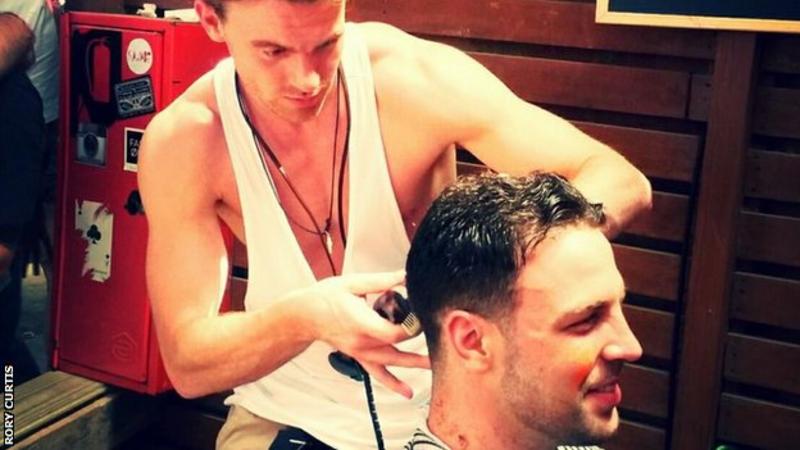 “My mum’s got six sisters,” Curtis explains. “All of them were teachers apart from my mum. I thought, ‘Get my teaching qualifications, then do barbering’. My parents owned Charlie Parker’s [barber’s shop]. They had four or five salons in the mid-to-late 80s and early 90s. It’s always been in the family, the hairdressing, so I thought I’d mix the two – teaching from my mum’s side, and then the barbering.”

Learning the trade meant hours upon hours in his aunt’s salon. “The busiest day at a barber’s shop is a Saturday,” Curtis realised. “I’ve got to think of my career now, not just what I love doing.” Football had to be sacrificed.

After attaining the relevant qualifications, Curtis became a lecturer at South and City College Birmingham, teaching barbering. He was passionate about the craft, but, over time, came to find the teaching element too restrictive. He decided to go it alone and, with his father’s guidance, open his own salon. “It was easy thinking of the name,” he says. Charlie Parker’s Cut Throat & Coffee opened in Worcester in 2019.

Football, once the axis around which his life revolved, now plays only a supporting role. Earlier this year, he began to play again. “Just a kick-about,” is how he describes his seven-a-side games on a local all-weather pitch. “One of the lads there used to play for Blues. It’s me against him, really.